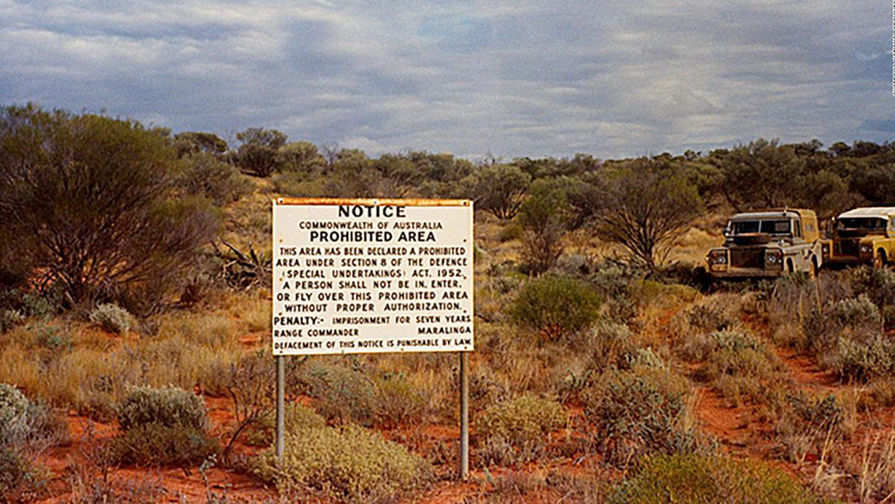 Documents relating to nuclear tests in the UK in Australia, has disappeared from the National archives in London, complained to the researchers. According to them, reminiscent of attempts to keep secret some information. It is already known that part of the archive will be moved to another place, where not provided by open access.

Documents related to secret testing of a British nuclear weapons in the Australian Outback, was withdrawn from the National archives without explanation, reports CNN. Confusion over the incident was expressed by the researchers and historians working with materials to obtain information about the launches, which are still classified.

The UK first experienced independently developed nuclear weapon in October 1952, the third in the world after the United States and the Soviet Union.

However, she remains the only member of the nuclear club, not carried out tests on its own territory. As the ground was constantly used by the Australia and Islands in the Pacific ocean. The last test of the British date back to 1991. And in 2015 Prime Minister David Cameron has said it is ready to use nuclear weapons if necessary.

According to the expert Elizabeth Tynan, the British government traditionally provides access to documents when their age exceeds 30 years. However, archival data on nuclear tests remain a secret, and at the expiration of the Statute of limitations. What is happening is very reminiscent of the attempt to conceal information, I’m sure the author of the book “Atomic thunder: the story of Maralinga”.

“British nuclear tests in Australia caused huge damage to the aboriginal people, military and civilian personnel, the considerable part of the territory, — said Tynan. — This country has a right to know the truth about these trials. Unfortunately, the puzzles become harder to solve after the closure of the archives of the British government.”

Professor, University College London John Agar added that it is not about “a pair of some records”, and two global sets of unique data that were previously opened for research. They are essential for any historian of the British nuclear projects, he said, also posetovali that access to the archives was closed without explanation, or at least consultation with experts.

The seizure of the documents was first spotted by researchers at the end of December last year. However, in January, access to them remained closed.

As explained by the representative of the National archives, the removal of details about the trials in Australia were produced at the request of the Department for decommissioning of nuclear weapons (NDA), which was ultimately responsible for the storage of materials. In turn, this organization explained that “the documents were temporarily withdrawn from public access for special inspection.”

“It is unclear how long it will take, but many documents are returned for public use”, — stressed in the NDA.

Professor Agar has several other information: as his personal correspondence with the NDA, some documents will be archived Nucleus in the North of Scotland, specialising in civil nuclear industry in the UK. This archive provides online access to their materials. Agar convinced that the problem could be solved copying of documents, however, the initiative has not yet shown.

In years 1955-1963 the United Kingdom conducted 12 major nuclear tests, the approximate capacity ranges from 1 to 27 kilotons of TNT equivalent in a sparsely populated area of Maralinga South Australia. The information was kept secret for several decades. Only in 1984 after a series of scandalous reports in the media were formed Royal Commission of McClelland: as a result of its work became known for the enormous damage caused to indigenous people and Australian soldiers who worked on the polygons.

The effects of explosions caused people burning sensation in eyes and skin rash. Many of us felt nausea and suffered from diarrhoea.

These claims were rejected and derided by officials until the publication of the report of the McClelland. For example, the Australian government had to pay the tribe tjarutja $13.5 million in compensation.

According to the report of the Commission, as of 1985 in Maralinga there was still significant danger of radiation poisoning. Measures to eliminate contamination was completed only in 2000, besting the British Treasury of $108 million And yet, despite the recognition by the authorities of the high risk tests for the health of aboriginal people, many data on testing nuclear weapons in Australia continue to be kept secret.

Since 1998, the only component of the nuclear forces of great Britain is a group of “Trident”. It consists of four nuclear submarines of the “Vanguard”, based in Scotland in Faslane. Each submarine carries up to 16 Trident II missiles, each of which can accommodate up to eight warheads. At least one armed submarine is always on duty.

Uncensored: Poroshenko swore to the address of the blogger Sharia

Revealed the release date of a cheaper iPhone