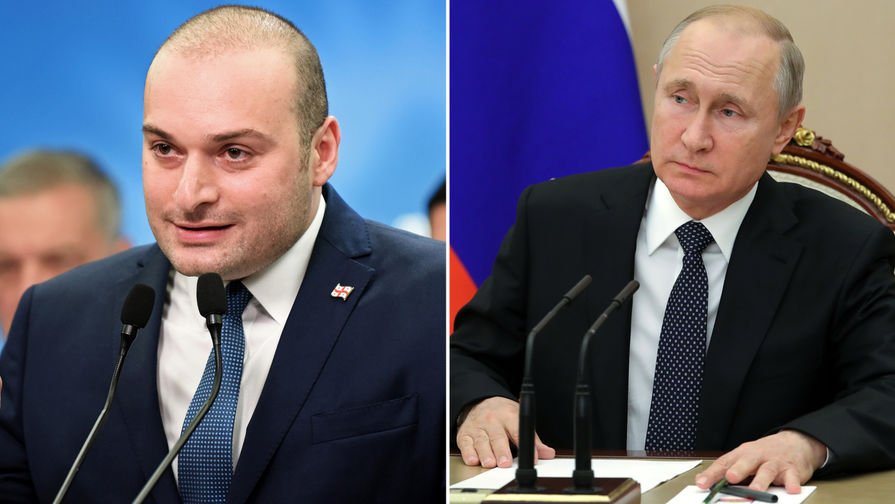 Swearing TV presenter George Gabunia the address of the President of Russia Vladimir Putin has angered the Prime Minister of Georgia Mamuka Bakhtadze. He called the incident “disgusting provocation”. Director General of TV channel “Rustavi 2” Nika Gvaramia apologized for the Mat in the broadcast channel and said that the copyright transfer format Gabunia does not justify “such sickening abuse”. The Russian, Olga Skobeeva called the words Gabunia “filth and vulgarity”.

Prime Minister of Georgia Mamuka Bakhtadze said that the mate to the President of Russia Vladimir Putin on air of TV channel “Rustavi 2” is “absolutely unacceptable”. About it reports “Georgia. Online”.

“What we’ve seen today is in the air “Rustavi 2″ is a disgusting provocation and attempt to destabilize our country. This is totally unacceptable!” — outraged the head of the Georgian government in his Twitter.

In addition, the General Director of the Georgian TV company “Rustavi 2” Nika Gvaramia apologized for the foul in the air of your channel and was criticized leading George Gabunia.

According to Gvaramia, the author’s format of the program does not justify the use of “such sickening abuse” in the broadcast channel. He stressed that such “Amateur” and “offensive” are not allowed.

Clarification on the incident channel will release separately, he added. It is also reported that the trick Gabunia caused outrage among the General public in Georgia.

In addition to personal insults, Gabunia obscenely expressed in the address of the deceased mother and father of the Russian President.

Mat Georgian showman commented on his colleague from Russia – presenter Skobeeva. In his telegram, the channel is simply called Gabunia and Gvaramia “idiots”.

She subsequently supplemented her comment. Skobeeva refused to publish a video featuring Gabunia: “Wish — you will find”. According to her, “nothing to comment”, and the act of a presenter is none other than “the filth and vulgarity,” as well as “pure provocation”.

In addition, Skobeeva invited to Express their opinion on the matter to the President of Georgia and “the Georgian Minister, who did not want to break trade ties with Russia.” She stressed that Tbilisi is “sawing off the branch on which they themselves sit.”

Earlier, the head of the Ministry of economy and sustainable development of Georgia Natia Turnava said that the pragmatic economic relations with Russia will benefit Tbilisi.

“The stronger we are economically, the more countries with which we conduct economic, pragmatic relations, including with Russia, the more satisfied tourists, leaving, luck with them information about the real Georgia, the better for us”, — said the Georgian Minister, reports of NSN.

At the end of June in Tbilisi started a massive anti-Russian protests, the reason for which was the incident in the Parliament with the participation of the Deputy of the State Duma of the Russian Federation Sergey Gavrilov. Arrived in Georgia with a delegation of the Interparliamentary Assembly on Orthodoxy (IAO) member has angered the Georgian opposition that took the place of the speaker of the Parliament and gave a speech in Russian.

Evening on the square in front of the Georgian Parliament gathered thousands of Georgians demanded that heads of law enforcement agencies and the government to resign.

The protesters waved flags of Georgia, Ukraine and the United States and chanted various anti-Russian slogans, chanting self-Georgia “Sakartvelo!”. Radicals burst into the courtroom, doused Deputy Gavrilova water and demanded that the Russian delegates return immediately to Moscow. After that, the Russians escorted immediately went to the airport and flew back to Russia.

At the same time, in the square near the Parliament, clashes radicals with the police special forces. Security forces used tear gas, rubber bullets and water cannons. About 250 people were injured, received injuries and wounds were detained more than 200 protesters.

First Deputy Chairman of the Federation Council Committee on international Affairs Vladimir Jabbarov subsequently stated that the cause of the riots in Georgia have internal problems of the country, reports FAN.

“Particularly shocked by the evil of Russophobia. My friends gave me to look at the record of what was shouted in the square of the rebellious youth. And I think that is a direct insult to our country”, — said the Senator.

He added that the anti-Russian protests had been instigated by the opposition. In addition, it is unlikely the protesters were worried about the state of relations between Moscow and Tbilisi and the consequences for the Georgian economy, said a member of the Federation Council.

A direct consequence of anti-Russian rallies in Tbilisi was a ban on direct air links with Georgia entered by Russia’s President Vladimir Putin shortly after the beginning of the unrest. Planes from Russia will no longer fly to Georgia, starting Monday, July 8. The ban is temporary and will last until the moment when relations between the two countries returns to normal. The Georgian authorities have estimated losses from the reduction in tourist flow of Russians in the hundreds of millions of dollars.

Their last flight: Airbus discontinues the A380

Moldovan businessman and the speaker of the Parliament spoke about "the salaries of the purse" and high-end apartments, obtained from the leadership of the democratic party