Studying the pictures taken by Rover Curiosity on the red planet, ufologists noticed a dark spot, somewhat similar to the soaring eagle. A self-proclaimed expert on Mars research Scott Waring suggested for this phenomenon, two alternative explanations, each of whom is a very bold conspiracy theory. 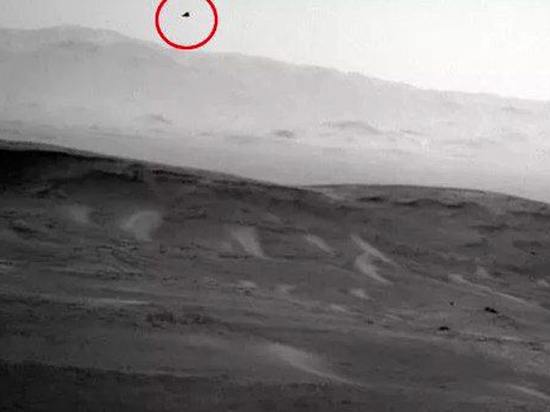 Waring, who used to be “found” living beings on Mars pictures said that the photo can serve as another evidence of animals on Mars. He also did not rule out that in fact the Rover is not on Mars, and on Devon island in the Canadian Arctic archipelago, resembling the Red planet. UFO researcher expressed confidence that one of these two explanations correspond to reality.

The ability — and the desire of man to see in any mystery spot the familiar shape is called “pareidolia”. This illusion is based on the very useful ability to get the best data in terms of incomplete information, however, it built the vast majority of conspiracy sensationalism. Of course, “eagle” in this respect is somewhat different from other “animals on the moon” — spot visible in the sky, that is, it is not a stone or a shadow of an unusual shape, unlike the vast majority of reasons for pareidolia. However, it is likely that it is just a defect of the image — in any case, this explanation seems more plausible than both, suggested a meeting.

It should be noted that some professional scientists still do not rule out that in the past Mars was habitable, because, when the Red planet was covered with oceans of liquid water. Moreover, sometimes the experts even admit that the living beings can even now inhabit the Red planet — indirect evidence (though not proof) of it is recently recorded there is the release of methane. However, you need to consider what to populate Mars can except microorganisms, not animals, like terrestrial birds or mammals.

“NASA confirmed the discovery of possible “signs of life” on Mars”

A warm winter will not lead to a cold summer: a climatologist gave a forecast