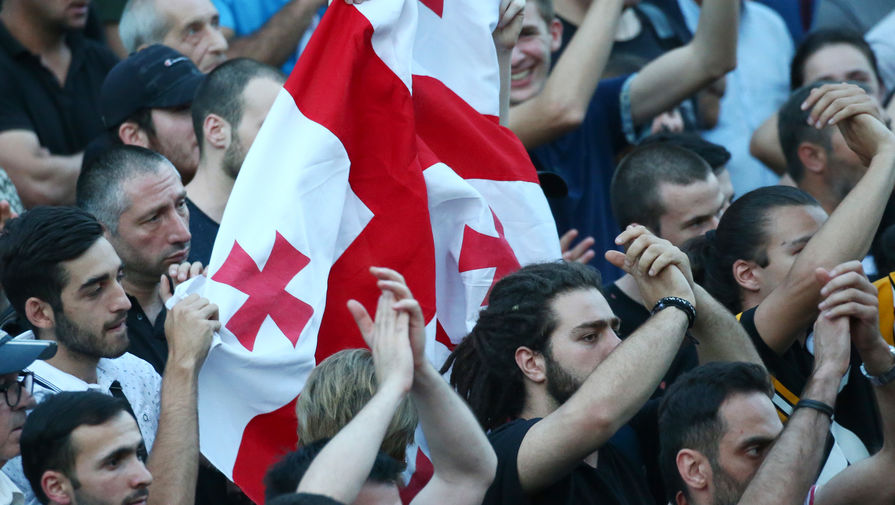 Some thousands of Georgians gathered for a rally in Batumi, demanding from the authorities to establish relations with Russia. The Deputy of the Georgian Parliament from the “Alliance of patriots” Ada Marshania stated that the necessary “dialogue on the difficult issues,” and not only with Moscow but also with the Abkhazians and Ossetians. In addition, the rally demanded to restore the neutral status of Georgia and to abandon anti-Russian rhetoric.

In the centre of Batumi held a rally in support of improved relations with Russia. The event was organized by the opposition party “Alliance of patriots of Georgia”, RIA “Novosti”.

“Together we say to the authorities that it’s time to begin a broad dialogue on the difficult issues with Moscow.

We must also begin the difficult conversation with Abkhazians and Ossetians”, — said the Deputy of the Parliament of Georgia Ada Marshania. According to her, the initiative in this matter must come from the Georgian side.

The leader of the “Alliance” Irma Inashvili also called on the Georgian authorities to open direct talks with Russia, South Ossetia and Abkhazia.

“The main requirement is that our leadership has finally seen what the people want”, — said Inashvili.

In addition, the protesters demanded Georgia’s non-aligned status, and also to Tbilisi refused the militant anti-Russian rhetoric. Relations between Georgia and the Russian Federation should return to the “pre-crisis” condition, said the leaders of the protest.

The head of the Georgian Institute of strategy and management, Peter Mamradze, in conversation with NSN stressed that relations between Russians and Georgians must be separated from politics.

“No Russophobic sentiments and I never noticed. The attitude of governments to their own government in the first place, has nothing to do with the relations between peoples. Russian tourists according to their wish on social networks have posted a lot of information about how they welcome and warmly accepted. Wrote that

the most dangerous in Georgia — to go too far chacha, delicious Georgian wine or eat lots of delicious khachapuri,” — said the Georgian political scientist.

He also added that “since June 20, and to this day” there was not a single incident in which Russian tourists would be subjected to danger.

Georgian political analyst, former press Secretary of ex-President Eduard Shevardnadze Valery Kvaratskhelia said in an interview with the FANthat the responsibility for the deterioration of relations between the Russian and Georgian peoples lies primarily on the United States.

“The U.S. is doing everything in order to tear away from Russia Georgian people — to tear completely, and primarily mental. But while they can’t do it, anyway still did not work. American sociologists have recently conducted a survey and found that 31% of respondents — for the entry of Georgia into the Eurasian Union and to restore friendly and good-neighbourly partnership relations with Russia”, — said the expert.

Ten days earlier, the Minister of foreign Affairs of Russia Sergey Lavrov said that the crisis in Russian-Georgian relations caused by “selfish, opportunistic goals of the politicians.” The Minister is convinced that the Georgians don’t consider the Russians enemies. He added that “eventually everything will fall into place” between the two countries will be restored to “good neighborly relations”.

“I hope that the Georgian authorities will be able to stabilize socio-political situation in the country and to eliminate the existing threats to the security of Russian citizens, — said the Minister. In this case, the ban on flights between the two countries is likely to be lifted, Lavrov added. This measure was used by Russian President Vladimir Putin after the outbreak of anti-Russian protests in Georgia.

20 June in Tbilisi protests began, the formal reason for which was the incident in the Parliament with the participation of Russian state Duma Deputy from the Communist party faction Sergei Gavrilov. Came to Georgia with a delegation of the Interparliamentary Assembly on Orthodoxy (IAO), the MP was outraged by the Georgian opposition, finishing at the invitation of the Georgian side the seat of the speaker of Parliament and uttering the opening speech in Russian.

After some time on the square in front of the Georgian Parliament gathered thousands of disgruntled Georgians, who demanded that heads of law enforcement agencies and the government to resign and to reform the electoral system. These demands were partially satisfied.

The demonstrators waved flags of Georgia, the European Union, Ukraine and the U.S. and chanted anti-Russian slogans, shouting chorus also self-Georgia “Sakartvelo”. Radicals burst into the courtroom, doused Deputy Gavrilova water and demanded that the Russian delegates return immediately to Moscow. After that, the delegation of the Russian Federation under protection as soon as possible went to the airport.

In addition, the square outside Parliament, clashes radicals with the police. Law enforcement officers used tear gas, rubber bullets and water cannons. About 250 people were injured, more than 200 demonstrators were detained and subsequently released.

Interrupted flight: how the fall of the Sukhoi Superjet

“The decline of the epidemic”: France is out of quarantine

In Italy, some businesses will resume work on may 4, school will be closed until September