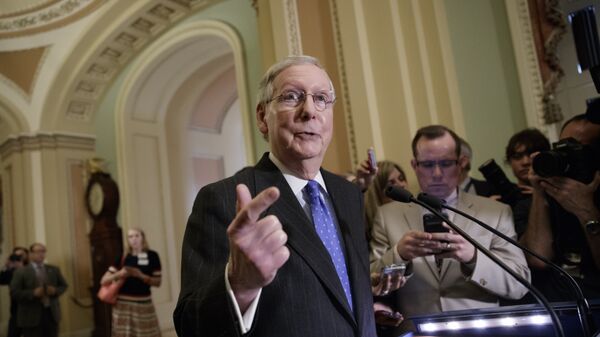 The Republican majority leader in the Senate Mitch McConnell spoke on Monday with an unusually emotional speech, in which he categorically denied the accusations of the Democrats in pandering to or even cooperation with Russia, told television channel Fox News.

“Slander, if I was a “Russian agent,” was published in the opinions section of the Washington Post. The accusation “anti-American” position handed (TV channel) MSNBC. That’s what came left-wing politics in 2019,” said McConnell in the Senate.

Previously columnist for the Washington Post Dana LeBlanc called McConnell “Russian agent” because he gave two bills about election security, proposed by the Democrats. Twitter feed of MSNBC TV host Joe Scarborough went hashtag #MoscowMitch (“Moscow Mitch”), and in the media and social networks, there were cartoons depicting McConnell as a “puppet of Moscow”.

“I actually don’t usually respond to critics in the media, if they do not understand what they are talking about. But we are talking about the toxic and harmful situation of modern McCarthyism,” said McConnell.

McCarthyism – a phenomenon of American history in the mid-twentieth century, when society is “cleaned out” from the alleged Communists that was accompanied by mass ostracism of innocent people. Senator Joseph McCarthy led the search for Communists in the institutions, which gave his name this campaign.

“This is very important if our country loses the ability to debate about public policy without cries of treason,” said McConnell. He reminded that McCarthyism divided the society and brought America a lot of damage in the course of the cold war.

The Republican leader attacked the “hysterical scribblers” who, according to him, working in the “anger-industrial complex” of media (similar to the military-industrial complex) and ignore principled and reasoned objections of Republicans to Democrats proposed measures.

Previously, McConnell has rejected two bills designed to increase the safety of the American elections. One of them was adopted by the house of representatives proposed the mandatory use of paper ballots, while many States have moved exclusively to electronic procedure. The second contained a requirement for candidates, their staffs and their family members to notify the Federal Bureau of investigation about the offers of assistance from foreign States.

At the request of McConnell, the Democrats have deliberately placed the Republicans procedural traps to accuse them of pandering to “Russian interference” in the elections. For example, the Democrats demanded that the Senate and its Republican majority unanimously and without discussion to pass a bill that managed to “sneak” in the house of representatives with only democratic votes.

Also, according to the leader of the Republicans in the Senate, the Democrats have provided for the allocation of States to the security of the election funds that were provided in the previous budget of $ 380 million. McConnell also said that the requirement to pre-election headquarters to report all contacts with foreigners raises questions from the point of view of freedom of speech.

The Republican recalled that he was always an opponent of the Soviet Union and supported President Ronald Reagan in 1980-ies in the program of the Strategic defense initiative, dubbed “star wars.” According to McConnell, he was glad to see the “fall of communism” and have always warned that the President-Democrat bill Clinton too had a soft spot for Russia.

According to him, he was “kicking ass” at a hearing of the Senate Democrats, who expressed optimistic about cooperation with Russian presidents Boris Yeltsin and Vladimir Putin. “And, of course, I helped the fight against completely helpless policy of the administration of (Barack) Obama against Russia”, – said the leader of the Republicans.

He also imputed a merit that opposed the Treaty start-3 and have been placing the US missile defense in Europe. McConnell said that he supported the “law of Magnitsky” sanctions against Russia and other countries and fought against “Russian intervention” in the elections.

The leader of the Democrats Chuck Schumer spoke after McConnell and repeated the accusations that he “wants to do nothing for the security of the elections.”

The United States accused Russia of meddling in elections in 2016, Moscow denies it. Spectacular USA Robert Mueller at the end of a two-year investigation confirmed the accusations of Russia in “intervention”, but was unable to substantiate the existence of “collusion” between President Donald trump and Russia. This “conspiracy” have long said, the Democrats, the Kremlin and the White house the existence of “collusion” categorically deny.

The building of the TV channel "122 Ukraine" in Kiev, fired from a grenade launcher