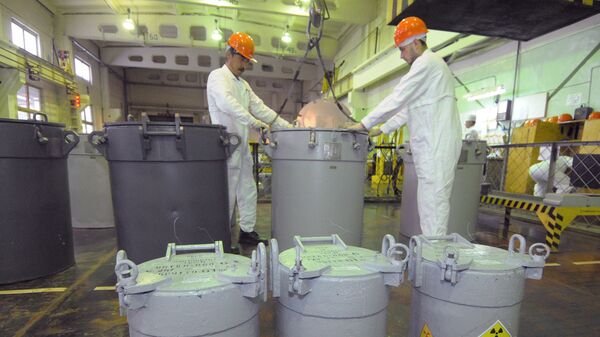 Radioactive ruthenium-106 could enter the atmosphere of Russia and Europe two years ago because of problems in the production of radioisotopes needed for the work of the Italian neutrino detector Borexino. To such conclusion the European physicists, who published the results of their calculations in the journal PNAS.

“Of course, all is conjecture, but we know that the Borexino project required large quantities of cerium-144. To fulfill obligations to the Italian partners, the manufacturer had to reduce the time normally spent on cooling of the spent fuel, leading to unexpected consequences,” said George Steinhauser (Georg Steinhauser) from the University of Leibniz in Hanover (Germany).

In September-October 2017 in the air over Russia and several European countries had traces of ruthenium-106, short-lived radioactive isotope not found in nature. Its concentration dramatically increased in the Chelyabinsk region, Tatarstan and a number of countries in Eastern Europe that has generated a lot of rumors and anxiety.

Almost immediately after the discovery of traces of this radionuclide was created a special international scientific Committee, which was attended by leading Russian experts and their colleagues from France, Sweden, Germany, the UK and several other European countries.

In January and April of last year, scientists confirmed that the release actually happened and the background radiation associated with the ruthenium-106, has increased significantly. Thus, what is most important, the total amount of radioactive substances was relatively small, hundreds of times lower than maximum permissible concentrations, and this discharge does not threaten health of inhabitants of Russia and European countries.

Experts are unable to tell the exact source of the leak, but they ruled out that it could arise from normal operation or failures of medical devices that use ruthenium-106, or combustion of a satellite with a radioisotope heat source or energy.

Many Western media have repeatedly stated that the emission occurred in the territory known to the NGO “lighthouse”, however, the representatives of the company and Rosatom has repeatedly ruled out such a possibility. Even before the announcement of the findings of the Commission the work of the enterprise checked by the relevant authorities. They did not record any violations, as well as traces of ruthenium-106 in the body of its employees.

European scientists have once again agreed with the representatives of the Russian nuclear industry, having studied all circumstances of this incident and proposing a new theory. It binds ruthenium-106 with the interruption in the supply of cerium-144 for the Italian Borexino detector, the only manufacturer which today remains NPO “Mayak”.

They came to this conclusion, re-analyzing data collected by the Association “Typhoon” and “Roshydromet” in September, 2017, in the first hours after the start of ejection, as well as various tracking stations in Europe and in Russia. Those and other data pointed to the southern Urals as the source of emission.

In addition, the researchers drew attention to an interesting event in 2018 in the Italian laboratory of Gran Sasso was scheduled experiment SOX-Borexino. In the framework of physics planned to start the search for the so-called “sterile” neutrinos, the fourth type of these particles almost never interact with matter. Their discovery, according to the theorists, will serve as the first example of the existence of “new physics”.

These experiments were eliminated in January 2018, due to the fact that the Russian partners Borexino are unable to provide a sufficient amount of cerium-144 is an extremely radioactive isotope is one of the most powerful sources of antineutrinos. This radionuclide, as written by European scientists, can learn from spent nuclear fuel and to produce in sufficient quantities on NPO “the beacon”.

In turn, for the production of required radioactive materials carried out of the reactor for at least three years, as the work with the recently removed spent fuel are much more dangerous and time-consuming for staff processing enterprises. On the other hand, the longer the fuel is cooled, the less cerium-144 in it.

Italian, as noted by Steinhauser, would require a huge amount of cerium, about 2.5 pounds ultra pure metal. European scientists suggest that their Russian colleagues had to take the risk and use less radioactive waste is designed to accelerate the production of sources of neutrinos.

As this process is associated with the ruthenium-106? The fact that in the last stages of SNF reprocessing arise its gaseous compounds, tetroxide and the dioxide of ruthenium. They possess extremely high corrosion properties and an unusually high concentration of these gases could corrode the filters and processing enterprise, or can seep through them in other ways.

These findings have already agreed Russian counterpart Steinhauser. For example, academician Leonid Bolshov, one of the leaders of the Commission, stated that the theory and experiments of its European counterparts “to ignore the measurements fractions of radionuclides in the soil next to the NGO “lighthouse”, where almost there is no record of ruthenium-106 and other contamination”. Therefore, he believes that the findings of his Commission should not be to change or add.