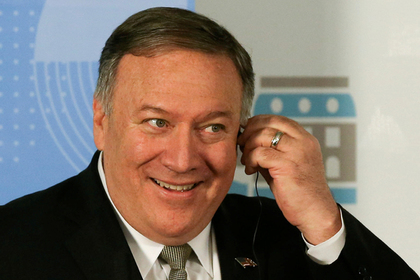 Washington hopes for a dialogue with Moscow and help in non-proliferation of weapons. This was stated by U.S. Secretary of state Mike Pompeo, speaking at the Economic club in Washington, reports “Interfax”.

“We [the Russian] was a strategic dialogue, which we hope will help to build something, covering a wide range of issues, not just nuclear non-proliferation regime,” — said the diplomat.

According to him, the US also wants the annexation of Beijing to conduct such discussions and hope for Moscow’s support. “I hope President [Vladimir] Putin will help us,” said Pompeo.

In addition, the Secretary of state refused to name approximate terms of signing a new nuclear agreement with Iran. He pointed out that “not doing the scheduling,” reports RIA Novosti.

Earlier it was reported about the intention of the U.S. to discuss with Russian counterparts the idea of a new agreement on nuclear arms control. Along with this it was noted that to change the policy in the Treaty on the elimination of intermediate and shorter-range missiles (INF Treaty), the American side was not planned.

Russian President Vladimir Putin signed a decree on suspension of the implementation of the INF Treaty on March 4. This was mirrored Russia’s response to similar actions of Washington. His American counterpart, Donald trump announced plans to withdraw from the Treaty in October 2018, on charges of violation of the Moscow document.

The INF Treaty, concluded in 1987 between the USSR and the USA, allows parties to be armed with ballistic missiles, land-based and cruise missiles with ranges between 500 and 5.5 thousand kilometers. Moscow and Washington have regularly accused each other of violating its terms.