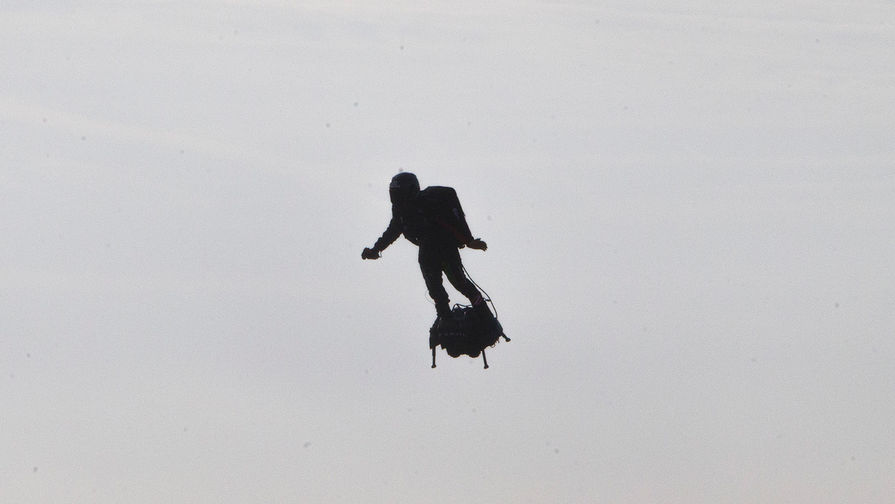 His journey began at 9:15 GMT and lasted for about 20 minutes, he covered a distance of about 35 kilometers. Zapata started near the commune, French commune of the Sangat and have successfully completed a flight near the town of St Margaret’s Bay in the UK.

“In the end, when I was hurt, I said to myself: “Stop, you have no right to pain. Have fun.” I saw the approaching coast of the UK,” he told reporters Zapata, adding that “he was very lucky” to carry out such a flight and have a team like he has.

Zapata was inspired by the first flight across the English channel, by French pilot Louis Bleriot 110 years ago – on 25 July 1909.

The inventor said that after several weeks of hard work feels tired and “needs a vacation”. Not hiding emotions, he thanked his team, spouse and friends for support. Talking to son on the phone after the flight, Zapata could not hold back the tears. “You’re the best dad,” he heard in the tube.

Speaking of future challenges, Zapata said that he was going to finalize his “flying machine”.

Zapata was a champion aquabike. In 2005 he invented the flyboard is a special Board set in motion due to the reactive force of the water flow, which is supplied connected to flaibano created by watercraft or jet engines run on kerosene and attached to flaibano. The design allows you to fly above the water surface to a height of 9 meters, tumbling in the air and sail through the waves.

In 2016 appeared the video, where Zapata tries out his new design, jet hoverboard Flyboard Air. In a video released Zapata using the hoverboard rose up above the lake to a height of 30 m. As promised by the developer, the final version of the device will be able to reach speeds of 150 km/HR, raise a man to the height of 3000 m, and in the air hoverboard will be about 10 minutes. The fuel tank is in the back standing to the right of the pilot, a special panel will allow you to control the hoverboard.

At the same time Zapata set the record for the longest flight on the hoverboard, breaking 2252 m at a height of 50 m.

In 2017, the patented no-fly list on his device in France. According to the inventor, the representatives of the Air gendarmerie of France threatened administrative responsibility, if he continues to fly on his levitating Board. The inventor added that now he “will have to leave the country” to continue its work. “Here as in France, are innovations,” said Zapata.

During a military parade in honor of Bastille Day in Paris in 2019 Zapata flying on the hoverboard on the Champs-elysées.

After a week, Zapata tried to cross on the flying Board the channel, but the middle of the route fell during recharging. He didn’t get hurt, but the flight had to be postponed.

Hoverbarge often called gyrometer that is not quite right — the first hover above the ground, while the second on two wheels moving along its surface. However, despite its apparent simplicity, such devices can also be dangerous. So, in 2016, 10 manufacturers have recalled in the United States about 500 thousand of its gyrometers in connection with the detection of defects such as overheating and ignition of a scooter with the subsequent drawing of burns to the owner.

Before that, the safety Commission U.S. consumer product recognized gyrometer unsafe means of transportation. The Commission drew up new safety standards for gyrometers and obliged all manufacturers and retailers to temporarily remove them from the market sales, as this mode of transport not currently have the required security certificate.

In the case of default, the companies face a full withdrawal of gyrometers.

This obligation refers not only to gyrometers, but to all self-balancing scooters, including the one-wheeled type.

Urine has proposed to use for growing plants on Mars

Urine has proposed to use for growing plants on Mars

Frozen lark from the ice age found in Siberia