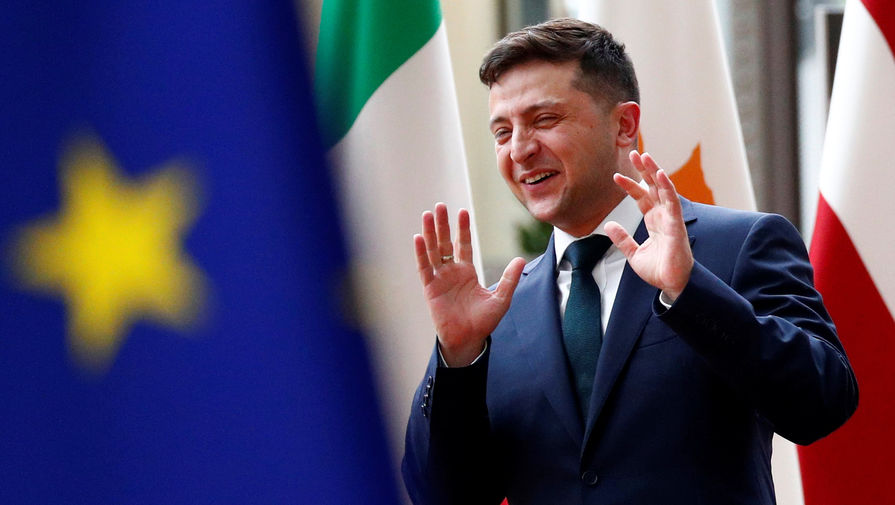 The President of Ukraine Vladimir Zelensky called as soon as possible to hold talks in “Norman format”. The settlement of the conflict in the Donbass, the head of the country considers its key task. This plan of action for the resolution of this conflict Zelensky and his entourage, apparently, not yet. From the party of “servant of the people”, meanwhile, a proposal to hold a referendum on granting the region a special status.

The President of Ukraine Vladimir Zelensky called on the leaders of the countries-participants of the Normandy format — Russia, France, Germany and Ukraine — as soon as possible to resume negotiations. The policy statement was a reaction to the death of four Ukrainian military in the Donbass.

“Today’s incident aimed at undermining not only this truce (“bread”- ed.) but also the negotiation process in General… that is why I urge the leaders of the countries-participants of the Normandy format of negotiations of Emmanuel Macron, Angela Merkel and Vladimir Putin — as soon as possible to gather for the resumption of negotiations,” Zelenski wrote in his Facebook.

After the parliamentary elections in Ukraine from Kiev began to receive more concrete proposals on the conflict settlement in the Donbass. However, while about any clarity to speak of.

Thus, on 5 August the head of the party “servant of the people” Dmitry Razumkov, which with high probability will occupy in the new government higher office, spoke about the possibility of granting special status of the Donbas.

In an interview to “Kommersant”, the politician stated that this issue will definitely be addressed in the new Parliament. The Razumkov quite clear formulated the prospects for resolving this question.

“This moment is discussion in the Verkhovna Rada, too, obviously will be, but in this problem, the war is not a question of laws. It is a question of desire. The desire to end this war. The Ukrainian side it is. Unfortunately, not all participants in this process we are seeing this desire,” said Razumkov.

He added that the resolution of the conflict also depends on diplomacy, sanctions, internal, social and information policy, economy and other aspects.

“This is a complex task that need to be made and which will enable a faster return of the temporarily occupied territory”, — said the leader of “public Servants”.

On the same day the Ukrainian edition “Страна.Ua” published an interview with the Deputy of the presidential party, the journalist of TV channel “1+1” Alexander by Dubinski, who also spoke about his vision of conflict resolution.

According to the Deputy, the question about further actions of the authorities in the Donbass can be put to a referendum.

“If we are going to return the territory together with the people or are we going to perpetuate the conflict? This decision must be taken by the President. Not refusing anything, but to build the wall. 30 30, in the middle is “no man’s” land. Or let them hold a referendum — said Dubinsky. — The decision rendered in a referendum will determine the way is acceptance of responsibility, including for the selection of the President.”

The proposal to hold a referendum is not the first time heard in the Ukraine. This initiative Zelensky presented in its election program. At that time the presidential candidate has proposed to adopt the bill “About democracy”, the essence of which is to consolidate the mechanism by which the Ukrainians will be able to “shape the main tasks for the government through referendums and other forms of direct democracy”.

Without the adoption of this bill the possibility of a referendum is questionable.

The fact that at the beginning of 2018, the country’s constitutional court declared inconsistent with the main document of the country the law “On national referendum”, which was adopted by the Verkhovna Rada in 2012. While the previous law which regulated this field since 1991, and lost the effect after the entry into force of the act of 2012. Thus, the normative-legal act regulating this issue in the Ukraine.

On the second day of presidential powers Zelensky, the head of his office Andrey Bogdan offered to hold a referendum on further talks between Kiev and Moscow. Statement of Bogdan caused a lot of criticism among the political opponents of the head of the country, as well as ideological opponents of negotiations with Russia.

However, the President soon said that the results of the referendum will not be binding. “We need to hear each person. This is not a legislative referendum, and information: citizens what you think. This is a normal conversation with people”, — quotes the President a press-service.

More importantly, Vladimir Zelensky completely ruled out the possibility of negotiations with the Kremlin. During the first months of his presidency, the position of the Ukrainian leadership regarding the further development of the situation in the Donbas were not clear. The contradictions pointed out politics inside Ukraine and beyond its borders.

However, the lack of specificity on such an important issue politicians and journalists were blamed on the inability of the President to pursue an independent policy. The Verkhovna Rada of the eighth convocation was under the control of Petro Poroshenko and his supporters, who would simply not give the President freedom of action, especially in terms of foreign policy.

After the parliamentary elections from Kiev continue to be contradictory statements. In early July, Zelensky in an interview to Deutche Welle made a sensational statement.

“Neither my team nor I signed this “Minsk”, but we are ready to go on all points of the Minsk agreements in order to finally we had peace,” said the President of Ukraine.

The observance of the Minsk agreements means the readiness of Kiev to implement several important actions, while the government of Petro Poroshenko is expected to perform some items was not possible.

In particular, we are talking about granting special status to the Donbass, Amnesty for participants of hostilities in the South-East, and the lifting of the economic blockade. But soon from Kiev was followed by another statement contradicting the President.

In mid-July, Dmitry Razumkov expressed the opinion that Amnesty for “insurgents, people who are implicated in war crimes”, is invalid.

“No Amnesty in this plan do not apply to either in Ukraine or abroad”, — he told on air of TV channel ICTV.

As for granting special status to the Donbas, here, judging by the interviews of the Razumkov and Dubinsky, “servant of the people” and not defined.

The leader of the party, saying the discussion of this issue in the Parliament, chose rather vague wording. “Servant” Zelensky will lead to the Parliament 254 deputies, allowing the President alone to make any decisions, including the granting of special status to the Donbass.

However, Razumkov can with certainty only say that Rada will consider this perspective. Apparently, the team Zelensky is still no clarity on this.

As for the idea of the Deputy Dubinsky, the imposition of the issue of granting special status to the Donbass referendum among all citizens of Ukraine casts doubt on the objectivity of the result. Besides, in this scenario with high probability will begin active propaganda by the two camps of the Ukrainian authorities, because the new Parliament will be presented to the side with the opposite position: “the Opposition platform for life,” Yuriy Boyko and Viktor Medvedchuk and “European solidarity” Petro Poroshenko.

The fact that the figure of the last causes irritation among Ukrainians, does not mean that his ideas, especially about such a painful social issue, as the Donbass, have lost popularity. Poroshenko and Medvedchuk — enough experienced politicians, who know thoroughly the electorate and skillfully manage it. On the eve of the referendum in Ukraine will unfold the new campaign, where the winner will be the one who is better it will hold. To decide, therefore, is not the people, and the one who will be able to influence most of it.

By the way, “the Opposition platform” has suggested to create in the new Parliament profile Committee to address the issues of Donetsk and Lugansk regions. On the website of the Verkhovna Rada created the petition.

“The activity of the profile Committee of the Verkhovna Rada will facilitate the coordination of work of different authorities and local administrations in order to facilitate the reintegration of the temporarily uncontrolled territories, to establish the restoration affected by the hostilities in the region and to ensure the priority needs of its residents. We are ready to actively participate in the work of this Committee and to delegate a representative in his leadership,” the statement reads.

Apparently, the new Ukrainian authorities will need time to determine the policy on the Donbas. Last but not least, Vladimir Zelensky need to decide what position he will take regarding the Minsk agreements. This, for example, depend on the negotiations with Russia that Vladimir Putin.

“Yeah, maybe if Zelensky will begin to fulfill their campaign promises, including come into direct contact with their fellow citizens in the Donbass and to stop calling them separatists. If the Ukrainian authorities will fulfill the Minsk agreement, and not to ignore them”, — said the President of the Russian Federation on the question of the possibility of negotiations with Kiev in an interview with the newspaper Corriere della Sera.

In addition, when the leaders of the countries “Norman format” will meet, Zelensky will need to clarify his position to the colleagues and to propose a plan of action to address the issue of Donbass. No obstacles in the way of the President inside the country is no more, and France and Germany are tired of the protracted conflict.