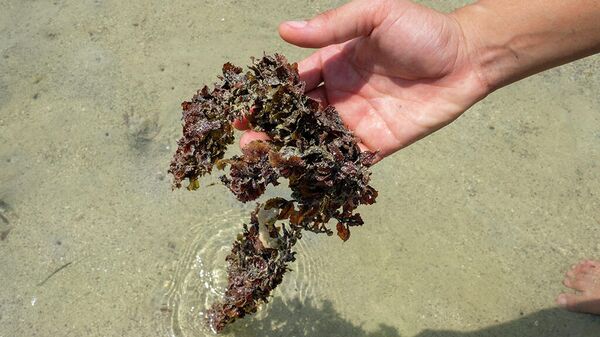 Large marine algae proved to be one of the main fighters against global warming – most of them is quickly buried in the depths or on the bottom of the ocean, where they cannot spread the bacteria and return carbon dioxide to the atmosphere. To such conclusion oceanographers, published an article in the journal Nature Geoscience.

“This discovery fundamentally changes the way we need to calculate the global carbon budget of the planet. It suggests that macroalgae play an important role in the removal of CO2 from the atmosphere. This should be considered when the estimates of how much carbon is stored in Earth’s oceans,” says Alejandra Ortega (Alejandra Ortega) from the University of king Abdullah in Thuwal (Saudi Arabia).

On Earth, as the scientists explain, there is a kind of “carbon cycle”. Giant amounts of this element are always buried at the bottom of the oceans of the Earth, where they fall together with the remains of animals and plants. Not less large quantities of CO2 into the atmosphere with emissions of volcanoes and other manifestations of geological activity.

Before the onset of the anthropocene, the “age of man”, these were one of the main conductors of the Earth’s climate, as they determine growing or falling CO2 concentration in the atmosphere. In the past, the imbalance in the “loss” and “profit” of carbon associated with an increase in volcanic activity or the release of organic species on the surface, have already caused the mass extinction and once stripped the planet of all its supply of oxygen.

Climate scientists today have no doubt that the burial of organic matter on the bottom of the ocean still plays an important role in containing global warming, but the extent of this phenomenon yet no one really assessed.

Ortega and her colleagues conducted the first such measurements using samples of deep ocean water, collected their Spanish counterparts in the framework of the Malaspina circumnavigation expedition conducted in 2010 by the National research Council of Spain.

Scientists tried to find out what types of organic matter contained in these waters and reach the bottom of the ocean, using relatively unusual methods. They did not catch individual particles of matter from sea water, weigh and examine them, and analyzed what fragments of DNA present in it.

Their share, as the researchers explain, account for approximately 3% of the total amount of carbon present in the cells. Accordingly, the total mass of absorbed CO2 or the potential sources of greenhouse gases can be evaluated by measuring the DNA concentration in water. As a bonus, you can see what types of marine organisms more conducive to burial of excess CO2 on the bottom of the ocean.

In addition to single-celled plankton, the scientists found in the water the traces of a large number of so-called macroalgae – multicellular marine plants. These include all of the red, green and brown algae, which usually grow on the surface of the shelf seas and ocean at a relatively shallow depth.

The opening of their DNA in seawater was quite a surprise to oceanographers, as they did not expect to see so many traces of them at great distances from the shores of the nearby Islands and continents. In total, the scientists were able to find traces of two dozen genera of these algae, whose species composition is extremely difficult to appraise.

About a quarter of their mass, as shown by the comparison in the percentage of DNA in near-surface and deep ocean waters, reaches the bottom of the ocean where plant remains are buried and for a long time leaving “the carbon cycle”. Another 70% will be at a depth of about a mile, where their decay will proceed much slower than on the surface.

Macroalgae current estimates of ecologists, absorb about 2.5 billion tons of carbon dioxide annually, which is comparable to the emission levels of greenhouse gases in the United States or any other industrialized country.

A significant portion of this carbon, as found Ortega and her colleagues, is imprisoned in the depths of the waters or on the ocean floor. This should be considered when predicting the fate of climate and the growth of the share of CO2 will affect the carbon cycle on Earth, conclude the authors.

Unprecedented security measures will be at the G20 summit