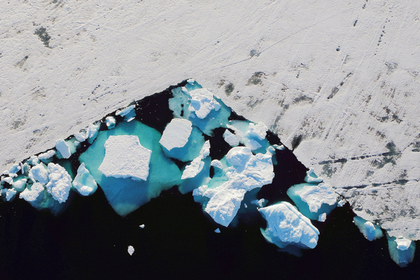 According to a UN statement, the flow of hot air, which caused a record heat wave in Europe, will move in the direction of Greenland, where it can contribute to the record melting of the ice cover. About it reports Reuters.

According to Claire Nullis (Clare Nullis), press Secretary of the world meteorological organization USA, hot air from Africa has surpassed the previous temperature records in Europe on 2-4 degrees Celsius, which is incredible climatic event. Because heat wave will go to Greenland, the island will experience increased ice melting, which can break the record of 2012. Then the ice layer was refined at a rate of several tens of meters per day.

In July 2019 Greenland surface melting have lost 160 billion tons of ice. The total ice thickness is about three kilometers, and its volume is 2.9 million cubic kilometers. In the case of complete melting, Global sea level would rise by seven metres.

According to the British meteorological Bureau, by 2050, the waves of hot air that will beat temperature records will start to occur every year.