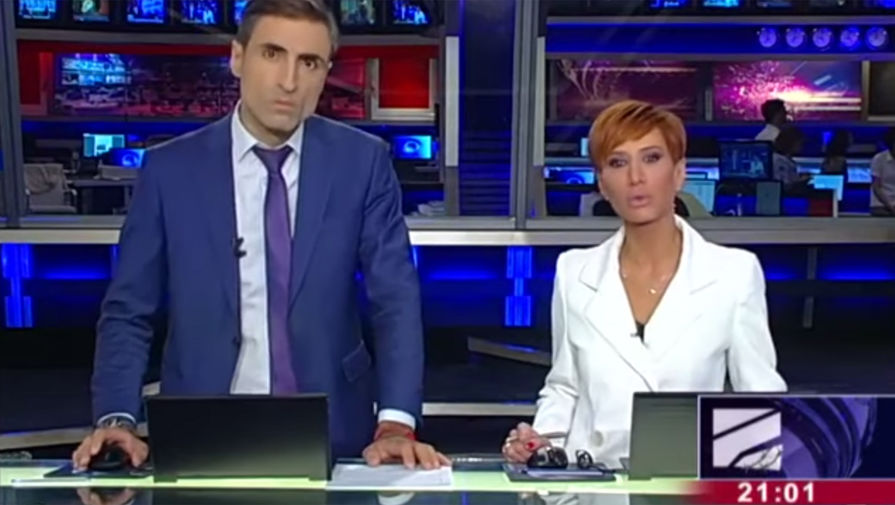 Broadcasters Rustavi 2 Diane gogoi and Michael Sesiashvili quit live. The journalists accused the new management of the channel in the “total cleansing” and “lack of freedom of speech.” They left the “Rustavi 2” after leading Giorgi Gabunia, who has previously insulted Vladimir Putin.

Journalists of the Georgian TV channel “Rustavi 2” Diane gogoi and Michael Sesiashvili announced his resignation in a live broadcast. The presenters made the statement during a news release.

“Red lines are crossed. In “Rustavi 2” has started a total cleansing. This is the end for me, the end of such “Rustavi-2”, which I loved and which was appreciated by the audience. Today I leave “Rustavi-2″, but I hope that we’ll meet again,” — said Sesiashvili.

According to him, he for 12 years working with people who “has created a void in Georgia and best TV product.”

In turn, gogoi said that was leading to “Rustavi 2” for over 13 years.

“I bid you farewell, I’ll see you in another space and on the other channel. The struggle for the salvation of the country continues,” the journalist added.

She also noted that the layoffs of the leading journalists of “Rustavi 2” is supposedly a former Prime Minister of Georgia Bidzina Ivanishvili.

“Today Ivanishvili finally realized the occupation of the channel. We have taken away free speech. I don’t work on television, where you will not be able to tell you what is really happening in a country that is rushing into the abyss. So I’m leaving this place, which was my second home,” said gogoi.

The journalists announced his retirement after the channel was dismissed leading Giorgi Gabunia, who live insulted the President of Russia Vladimir Putin.

We are talking about the incident, which occurred in early July. Then Gabunia in the program “PostScript” for more than a minute, using foul language in the address of the Russian leader.

The actions of the journalist condemned the government and the people of Georgia, in front of “Rustavi 2” was even organized a rally against Gabunia and then General Director of TV channel Nico Gvaramia. Moscow also condemned the actions of the journalist, in the state Duma even offered to introduce sanctions against Georgia because of the act Gabunia. Putin, however, refused to impose restrictive measures. In the end, Rustavi 2 became the property of the Kibar Khalvashi, who was fired Gvaramia. This reporter still has not apologized for the foul to take the address of the President of Russia.

The new Director General of “Rustavi 2” became Paata Salia, in addition to Gabunia he also fired the chief information officer Nodar Meladze, and producer of George Laperashvili. According to him, a series of layoffs of employees of the channel will continue.

“Dismissal Meladze, Laperashvili, Gabunia anything to do with the financial issues, the losses faced by the broadcaster,” explained Salia.

He also added that “Rustavi 2” may apply to the court for Gabunia because of a number of his statements that he did while on vacation.

“The owner of a controlling stock and the Director is me. The composition of these shares is temporary and conditional. Soon will learn about investors, building frequency, and I very much hope, on account,” — said Gvaramia.

Thus dismissed from the Rustavi 2 journalists can go on “Mtavari arch”. For example, Gabunia said that plans to one of the programs on the channel Gvaramia. According to him, he expects to create the equivalent of “PS”, which he led on “Rustavi 2”.

However, plans to launch a new TV channel Gvaramia may prevent the Prosecutor General’s office of Georgia. The fact that at the beginning of August, ex-Director General of “Rustavi 2” was accused of causing major financial damage to the channel. Investigators say that Gvaramia acted against the interests of “Rustavi 2”, which the budget of the channel were missing 6 million lari (more than 135 million rubles).

In addition, according to the Prosecutor’s office, in 2016, the company “InterMedia plus” bought two apartments in Tbilisi with a total area of 240 square meters in more than 565 thousand lari (12.7 million), which in 2017 Gvaramia extended themselves, and then sold more than 602 thousand lari (13,5 million roubles).

If Gvaramia found guilty on all counts, he could face up to five years in prison.