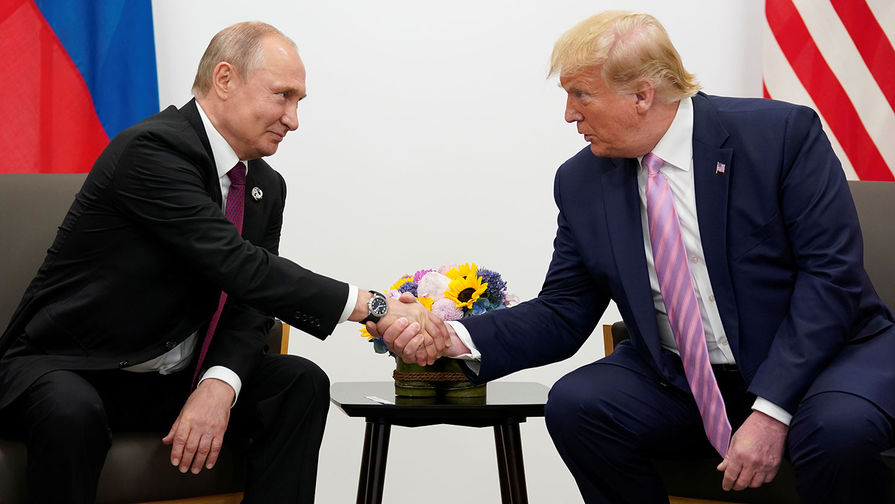 Russia does not intend necessarily to return to the G8, said the Kremlin. At the same time the wish to see Russia in the “big eight” say the presidents of France Emmanuel Makron and the United States Donald trump. For the American leader a nod in the direction favorable for Russia due to the fact that it can help to bring Russia to its side in a tactical confrontation with China. While the full membership of speech does not go yet: Moscow only want to invite for the next summit in 2020. But Washington believes that Russia first has to ask about the return in the G8.

Press Secretary of the President of Russia Vladimir Putin, Dmitry Peskov, made clear that Russia does not attempt any expectancy of a return to the format “big eight”.

The representative of the Kremlin noted that many issues, including global issues in geopolitics, security or the economy, for Russia more efficiently addressed within the G20 format, which includes such giants as India and China.

On the possible return of Russia in the “big eight” — an informal club of industrialized countries — again the President spoke of France Emmanuel macron. During a meeting with Russian President Vladimir Putin, he said that Russia is “deeply European state”, and France wants to see her in the G8 format. Currently, the organization includes seven countries: Britain, Italy, France, USA, UK, Japan and Germany.

This position is shared by the President of the United States Donald trump, who also said about necessity of returning of Russia in “group of eight”.

He says this is not the first time: in 2018 on the summit “the big seven” in Canada, he has performed with such idea.

“I would recommend… it’s for them to decide, of course, but Russia should be at the meeting, it should be involved. You know, whether you like it or not, and this may sound politically incorrect, but in our hands to control the world,” said trump in his speech.

Though at that time the world situation was different, experts say. Against the President of the United States conducted an investigation of spectracolor Robert Mueller about the possible “interference” of Russia in elections in the United States.

Now that the investigation has been completed in favor of trump, he has a free hand for dialogue with Russia. As noted in conversation with “Газетой.Ru” program Director club “Valdai” Dmitry Suslov, today, when accusations Mueller is no more, the American President can act more freely.

“The question, as I understand it, raised by France, and he about when Russia can get back to it, if it happens at all. So it can be lifted, but they continue to hear that Russia did not asked to return. So I would expect the first to happen is” — quote the statement of the representative of the administration trump RIA “Novosti”.

Trump statements about the desire to see Russia as part of the G8 sound in the background of a General deterioration of the character of Russian-American relations. Between the parties there is no trust, the United States left the Treaty on the elimination of intermediate and shorter-range missiles (INF Treaty). The fate of the renewal of another contract on Strategic offensive arms (SNV–3) is in question.

However, Suslov sees no contradiction in this. “The withdrawal from the agreement is associated with the desire to ensure the freedom of hands,” he said.

The expert recalled that the US policy is “systemic opposition”. With Russia and China, but “China — first”.

“The US views China as the main strategic rival, but at the same time, the United States understand that the strategy of simultaneous containment of Russia and China is not working: a bet on the inevitable clash between Russia and China together and not justified”, — said Suslov.

America, according to the expert, waited for the moment when Moscow “will start to view China as a greater threat than the West, but this is not happening”. In this context, Washington is trying to improve relations with Moscow and the question of the “big eight” lies in this direction, according to Suslov.

This year marks 25 years since the adoption of Russia in the “big eight”. It happened under President Boris Yeltsin, when the Russian economy was much weaker than the present, and its political influence was very weak. It is believed that this was done “in advance” to strengthen the status of the President of Russia.

In the United States and the Republicans, and the representatives of the democratic elite have repeatedly stated that Russia does not meet many of the criteria of being in the “big eight”. Besides the financial “eight” Russia was not included, and these issues were solved without it.

Russia left the club when the leaders of the countries that formed the “seven”, refused to attend the summit in Sochi in 2014 due to the annexation of Crimea to Russia. Despite the fact that the Peninsula became part of the country through a referendum, which was conducted in accordance with all international standards, the West refuses to recognize him as a part of the Russian Federation.

Another cause of withdrawal of Russia from “the eights” recalled on Wednesday the German Chancellor Angela Merkel. She said that Russia was removed for a reason, and although the implementation of the Minsk agreements is progress, it is still not enough.

The Minsk agreement was signed in 2015 after Kiev launched a military operation against the LC and the DNI. The documents were agreed with the participation of Russia, Ukraine, France and Germany, which represent the “Normandy four”. Moscow has repeatedly pointed out that is not a party to the conflict in Ukraine, and also said that Kiev refuses to perform the provisions of the agreements.

With the Minsk agreement binds the possible return of Russia to the club and the President of France Emmanuel macron. According to him, the return of the G8 format no resolution of the issues in Ukraine would be a strategic mistake, according to Reuters.

The issue of returning Russia to the “big eight” is linked to Ukraine also in the UK. Prime Minister Boris Johnson on Thursday assured President Vladimir Zelensky, that Britain will vote against the return of Russia.

The British Prime Minister, as reported by the press service Zelensky, told this during a telephone conversation. Eve Johnson also spoke about the possible return of Russia to the “big eight”. He said that the arguments for the return of Russia still need to find. He also noted that it is necessary to be sure.

It is worth noting that Japan, which is currently engaged in a dialogue with Russia about possible peace Treaty, spoke of Russia in the G8 more gently. As informs RIA “news” a source in the Japanese foreign Ministry has informed that Tokyo has advocated a more active involvement of the Russian side to solve international problems.

At the same time, while Russia’s participation in resolving “international problems” in the framework of the “big eight” out of the question, says programme Director, Russian Council for international Affairs Ivan Timofeev.

“Not macron or trump did not name Russia as a full member,” — said the expert, according to whom we are talking about a format “7+1”. As suggested by Timofeev, the countries of the “sevens” have a desire “to invite Russia to the summit and to Express all the complaints: it’s not about the fact that Russia is back”.

It is not excluded that the statements trump the desire to see Russia in the format of “eight” due to his overall negative attitude towards the legacy of his predecessor Barack Obama. “Trump has destroyed the legacy of Obama,” — said “Газете.Ru” the leading expert of The Atlantic Council Matthew burrows.

During the time spent at the helm of the current leader of the torpedoed virtually all decisions of the former President and once again mentioned Obama, when he spoke of Russia in the G8. According to trump, this step Obama took, as Putin “beat” him. “He wanted to care but I think it would be more correct to Russia was in the G8”, — said the head of the United States.