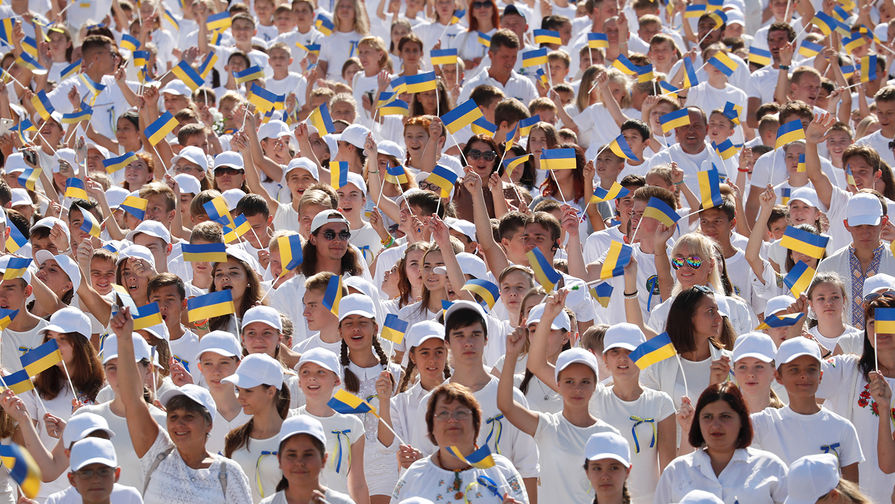 Vladimir Zelensky, speaking at the celebrations on the occasion of the 28 anniversary of independence of Ukraine, said that every morning getting TEXTS on fire in the Donbass. And expressed hope for the imminent appearance of the holiday in honor of peace in the region. As Ukraine celebrated independence Day and why the holiday came Petro Poroshenko, read in the material “Газеты.Ru”.

The President of Ukraine Volodymyr Zelensky, addressing the participants of the “Marches of Dignity” on the occasion of the 28 anniversary of independence of the country, expressed the hope that soon there will be a new milestone, which will mark the beginning of the world. According to the politician, every morning starts with messages from the General staff of the armed forces, which contains information about the shelling in the Donbass.

“The numbers may be different, but only one makes the morning good is zero. Attacks zero, losses zero,” said Zelensky.

In his opinion, ever in Ukraine — in addition to the independence Day will be celebrated the advent of peace in the Donbass.

“The specific day and month — not important. It will be a day when there will be peace. And my morning will start with a TEXT message that over the past day in Ukraine were born to every 1,000 boys and 1001 girls”, — said Zelensky.

He also stressed that he had signed a decree establishing a new holiday — Day of memory of defenders of Ukraine, it will be celebrated annually on August 29.

Festive events on the occasion of independence Day were held across the country, the largest of these took place in Kiev. A feature of the celebration of the 28th anniversary of Ukrainian independence was the lack of a military parade. By decree Zelensky, demonstration of military equipment was replaced by the “March of Dignity”.

The administration of the President of Ukraine has decided to abandon the military parade and to divert funds for his organization on a military pension. Himself Zelensky said that the award will allocate 300 million hryvnias ($11.7 million).

However, this idea will not please everyone. In particular, the speaker of the Verkhovna Rada of Ukraine Andriy paruby at the beginning of July made a criticism of the decision Zelensky.

“I’m unpleasantly surprised by this decision. But will it be a parade, not for them to decide… I Urge everyone who fought for Ukraine’s independence, in the revolution of dignity, veterans, military, volunteers on 24 August to go to the Khreshchatyk to the independence parade the main street of the country”, — said Parubiy.

The policy proposal was supported by first Vice-speaker of the Parliament Irina Gerashchenko, according to her, the military parade right “to display the strength and power of the Ukrainian army”.

“This parade needed a civilian to see how to change the Ukrainian army, how recruited and power, as modernizarea”, — added Gerashchenko.

She also stressed that the refusal of the parade is “bold strategic disadvantage”.

Despite it, in Kiev, a military parade is held “March of Dignity”. The event began with a minute of silence in memory of those killed in the struggle for independence of Ukraine. It was followed by the speech Zelensky, in which he urged Ukrainians to unite.

“We, Ukrainians, are different, but we have to be United, to rely only on themselves, not to swear, but to unite. We all, Russian and Ukrainian are, regardless of religion, should be one people and move forward,” — said the President of Ukraine.

During a speech Zelensky was confusion, one of the audience began shouting “shame!”, but as it turned out, he was not the leader of Ukraine. According to local media, the man was drunk and shouted at police officers who tried to take him.

After his speech, the President of Ukraine held a ceremony at which he awarded the order of the representatives of various professions. In particular, the Ukrainian leader was posthumously awarded several victims in the Donbass military.

At the end of the awarding ceremony a column of people, composed of representatives of different branches of armed forces, veterans, families of the victims, teachers and athletes went procession to the European square.

While on the “March of Dignity” was attended by four presidents of Ukraine — Zelensky, Leonid Kuchma, Leonid Kravchuk and Viktor Yushchenko. Not enough of the former leader of Ukraine Petro Poroshenko. During the procession he was in St. Sophia Cathedral, which held a prayer service for Ukraine.

After the “Marches of Dignity” Poroshenko explained why missed the event. According to him, the main reason was the lack of a parade.

In defiance of the President — “March of the defenders”

“March of Dignity” was not the only festivity of the independence Day of Ukraine. After its completion, in Kiev began the “March of the defenders”, which was attended by about 15 thousand people.

A column of people under the flags of Ukraine and nationalist organizations was held in the center of Kiev from the Park of Taras Shevchenko to Maidan. The event was organized by veterans and volunteers, and the families of those killed in the Donbas Ukrainian servicemen.

March of the defenders” was a response to the abolition of the traditional military parade.

The demonstration ended with a minute of silence on independence and performance of the anthem of Ukraine. Then the part of the participants of the “March of the defenders” proceeded to St. Michael’s square, which hosted a prayer service in memory of those who died for the independence of Ukraine, which was held by the head of the Orthodox Church of Ukraine Epiphany.

Despite the scale, both events were held in a calm atmosphere. Police reported no unrest, but public transport worked normally.