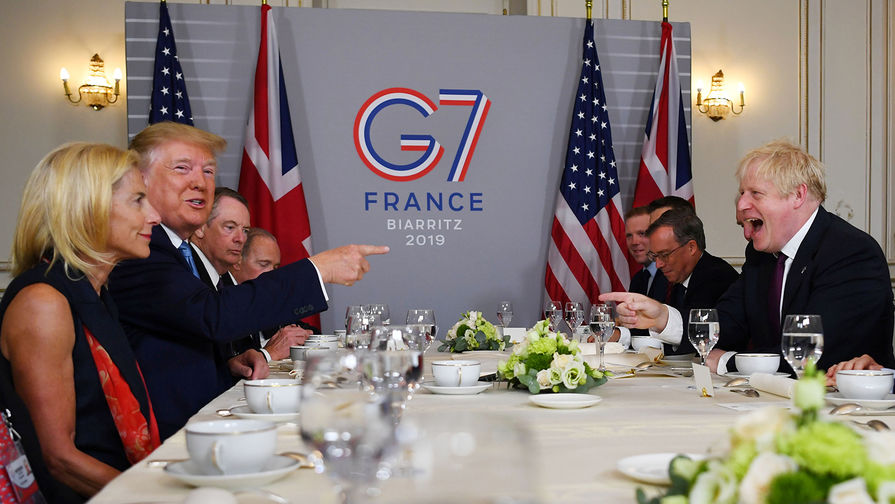 Donald trump at the G7 summit, said that advocates for the return of Russia in the “big eight”, but when discussing the issue of Moscow’s invitation to the summit at trump’s dispute with the leaders of other countries. The US President is not the first time States that would like to include Russia in this format. A similar position is held and the President of France Emmanuel macron, who called Russia a “European power”. The views of the members of the club on this issue, however, split.

Discussion about Russia’s accession to the G7 at the summit, which currently takes place in French Biarritz, caused great controversy during the dinner of heads of state. The US President Donald trump said about the need to reconnect Russia to the format. Him in this matter was supported by the Prime Minister of Italy, Giuseppe Conte, while Prime Minister Shinzo Abe remained neutral, the other leaders “the seven” were opposed to the proposal of the American leader, reports The Guardian.

This is a discussion about the possibility of Russia’s return to the club of industrialized countries as the eighth member was initiated earlier, not even trump, and French President Emmanuel Macron. During the visit to France of Russian President Vladimir Putin, he said that Russia is “deeply European state”, and France wants to see her in the G8 format.

Trump also made with a similar idea: in 2018 on the summit “the big seven” in Canada, he had already expressed a similar thought.

“I would recommend [the return of Russia]. It’s up to them, of course, but Russia should be at the meeting, it should be involved. You know, whether you like it or not, and this may sound politically incorrect, but in our hands to control the world,” — said trump in his speech.

Currently, the leaders of the split in relation to Moscow who was expelled from the organization after the referendum in Crimea in 2014. So, German Chancellor Angela Merkel said that Russia was suspended due to reasons which cannot be forgotten. Despite the fact that, according to her, the Minsk agreements on Ukraine is progress, it is still not enough. The so-called Minsk agreements have been concluded in 2015. Their goal was to establish peace in Eastern Ukraine, where Kiev is conducting a military operation against the breakaway Donetsk and Lugansk national republics.

The documents were agreed with the participation of Russia, Ukraine, France and Germany, which represent the “Normandy four”. Moscow has repeatedly indicated that it is not a party to domestic civil conflict, and also said that Kiev refuses to implement agreements.

Merkel again made a similar statement during a discussion at the G7 summit themes of Russia and Ukraine. “I on behalf of Germany made it clear that we need progress in the implementation of the Minsk process,” she said, noting that she raised, position was supported by other member countries “the big seven”.

At the same time, British Prime Minister Boris Johnson also took a very cautious stance regarding the return of Moscow. He said that the arguments for that Moscow was re-adopted in the “big eight”, still need to find.

This year marks 25 years since the day Russia became a member of the “big eight”. It happened under President Boris Yeltsin, when Russia’s economy was weak, and political influence was small. It is believed that this was done “in advance” to strengthen the status of the President of Russia in the international arena.

While in discussions on Moscow and the “eight” referred only to a possible invitation to Moscow for a summit in 2020 in the United States. The full membership can not speak , said in an interview with “Газетой.Ru” programme Director, Russian Council for international Affairs Ivan Timofeev.

“Not macron or trump did not name Russia as a full participant”,

— said the expert, according to whom we are talking about a format “7+1”. As suggested by Timofeev, the countries of the “sevens” have a desire “to invite Russia to the summit and to Express all the complaints: it’s not about the fact that Russia is back.”

Press Secretary of Russian President Dmitry Peskov said that Russia does not attempt any expectancy of a return to the format “big eight”. He noted that many issues, including global issues in geopolitics, security or the economy, for Russia more efficiently addressed within the G20 format, which includes such giants as India and China.