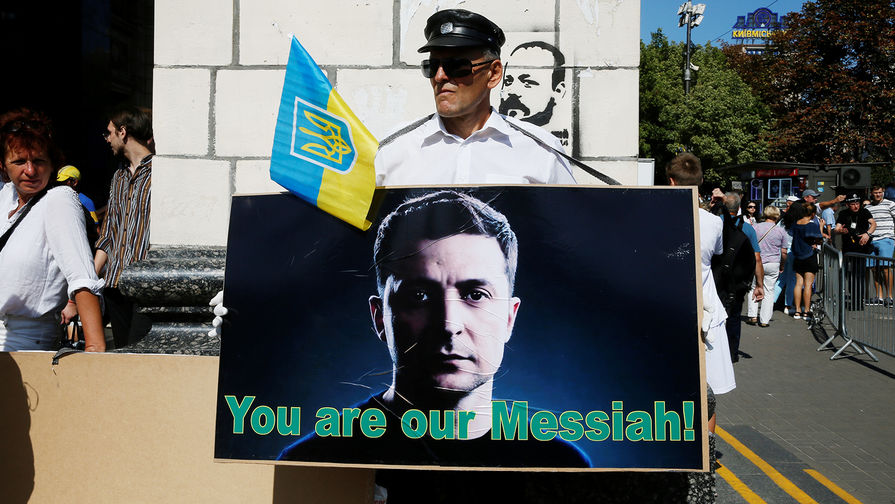 Tuesday marks exactly 100 days since the inauguration of President Vladimir Zelensky. Had no political experience before to take this position, he is actively pursuing change, including getting rid of the most odious initiatives of his predecessor Petro Poroshenko. However, 40% of Ukrainians Zelensky is still a “dark horse”.

The President of Ukraine Vladimir Zelensky held at his post for 100 days. For a politician of such period is an important stage for evaluation activities. The new Ukrainian leader has managed a bit, but he managed to partly change the tone of Ukrainian politicians.

Voters in Zelensky candidate without political baggage — he said that he had nothing to do with the previous corrupt elite. Voted for him diametrically opposed groups of people who expected him to improve the lives and movements to end the conflict in the Donbass. The head of the Institute of global strategies in Kiev, Vadym Karasyov calls the team Zelensky an “electoral revolt against the elite”.

“The ideal for them — the formation of a system, where “strong arm combined with economic liberalism and would represent something of a cross between Georgia Mikhail Saakashvili and Alexander Lukashenko’s Belarus”, — he said.

On the one hand, some of the changes that had to carry Zelensky — such as the renaming of the presidential administration in office — seem to be cosmetic. On the other, he for the first time in the modern history of Ukraine managed to make an incredible to generate in Parliament the absolute parliamentary majority that will give him loyal to the government to advance their agenda.

According to sociological group “Rating”, operation Zelensky as President approve 50% of Ukrainians. The dissatisfaction expressed by only 11%, and slightly less than 40% have not yet formed their opinions.

100 days of the Board Zelensky became more evident defeat of the former President of the country Petro Poroshenko: despite the fact that his party “European choice” managed to obtain seats in Parliament, Zelensky has the trend of active replacement of government appointees of his predecessor.

The fate of Poroshenko is in limbo, he is regularly summoned for questioning and possible criminal prosecution becomes more real.

As Ukrainian media, Zelensky has canceled more than 200 decrees Poroshenko and other leaders of the country and issued 740 own.

However, he actively puts his people in positions of regional administrations. However, the problem is that many of them come from his Studio “Quarter-95” and leadership experience many of them missing.

Among the winning initiatives Zelensky 100 days of the presidency are the ones that raised the most odious laws passed under Poroshenko. One of them is the law on language, which is actually deprived Russian-speaking Ukrainians the right to speak in their native language.

Unlike Poroshenko, Zelensky shows no hostility to the Russian, and the head of his office Andrey Bogdan even said that the language can obtain the status of an official in the East of Ukraine after the conflict in the region. According to the Ukrainian edition Politeka, the status of the Russian language in Ukraine may be considered August 29 at a meeting of Parliament.

In addition, the new President tried to mitigate the problem of confrontation between the two Orthodox churches in Ukraine, which is actively promoted by its predecessor. At the end of the reign Poroshenko made to Ukrainian Orthodox Church autocephaly from the Moscow Patriarchate. This actually led to a Church schism and confrontation between believers. Zelensky same time, a recent visit was not to sign a joint Declaration with the Patriarch of Constantinople Bartholomew. Although it was formal and did not concern the internal situation, the fact saw the sign of the departure of the current President from the previous line.

Began a dialogue with Moscow

Continuing the rhetoric of his predecessor about the need to return not only of Donbass, but are included in the Russian Crimea, Zelensky however started a cautious dialogue with President of Russia Vladimir Putin.

Putin and Zelensky recently conducted a phone conversation, in which the Russian head of state said about the need for “strict observance of the established 21 July cease-fire and cultivation of forces and means from the boundary line” in the Donbass.

Dialogue between heads of the two countries took place at the initiative of Kiev and has already borne fruit. The parties have made progress in the exchange of detainees and convicted citizens of their countries. Speech, in particular, about the Ukrainian sailors arrested in November for illegal crossing of the state border. Just exchange according to media reports will be attended by more than 60 people from both sides.

Putin’s press Secretary Dmitry Peskov called the situation in Ukraine “running”, but noted that the Russian leader refers to Zelensky positively. However, the head of Russia’s more important than the implementation of agreements than talking, he said.

According to the press Secretary, the Russian President is a supporter of dialogue to solve pressing problems.

One of the major problems is the conflict in the East of Ukraine, where so far, there have been sporadic attacks. It is possible that after a full meeting in the Normandy format, which comprises Russia, Ukraine, France and Germany, the parties come to an adjustment of the Minsk agreements, the implementation of which is practically standing still.

The Minsk agreement was signed in 2015 after Kiev launched a military operation against the LC and the DNI. The documents were agreed with the participation of Russia, Ukraine, France and Germany, which represent the “Normandy four”.

In 100 days of presidency Zelensky also managed to make some contacts with the West, however, they cannot be regarded as sustainable.

His first presidential visit he made to Brussels, where he met with EU leaders. In 100 days of presidency main European counterparts Zelensky became the President of France Emmanuel macron, with whom he has already formed a professional and personal relationship. With the President of the United States Donald trump Zelensky has not yet met, while it is from Washington, not from Brussels depend on the success of Kiev in the resolution.