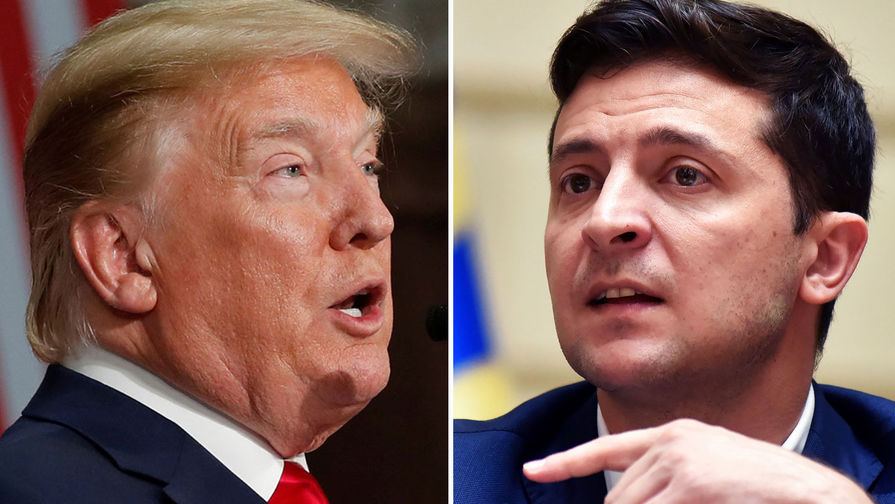 The head of the White house Donald trump wasn’t trying to put pressure on Ukrainian President Vladimir Zelensky during a telephone conversation, said the foreign Ministry of Ukraine. The reason for the scandal was the complaint of the employee of the American intelligence on telephone conversations trump. Specifically, it could be a phrase about possible blocking of military aid to Ukraine to $250 million, if Kiev will refuse to investigate the activities of Joe Biden.

The Minister of foreign Affairs of Ukraine Vadim pristayko has denied reports in the American media about the pressure the White house Donald trump on Ukrainian President Vladimir Zelensky during a telephone conversation.

According to the diplomat, Ukraine, “unfortunately for her”, trying to involve in inter-the standoff between Republicans and Democrats in the United States.

“Those people who are engaged in Ukrainian-American relations understand that we have always tried to appreciate the help from both parties, this assistance has enabled us to ensure that with the change of administration we will not change the priorities in relations with the United States,” — said the head of the Ukrainian foreign Ministry.

He added that Ukraine appreciates the support of the presidents of the United States, Congress, but this does not mean that the Ukrainian government wants to help any party, even if it could “in theory” to do it.

“The President asked trump, asked his Advisor [Rudolph] Giuliani, interested in Newspapers, Democrats, Republicans, whether crush on Ukraine. I want to say that we are an independent state, we have our secrets,” said Pristayko.

He noted that Zelensky has the right to the content of his conversation with another President remained secret.

“I know what was the conversation, and I think that no pressure existed. Leaders have the right to discuss all the problems that exist. This conversation was long and friendly”, — assured the head of the Ukrainian foreign Ministry.

We will remind, in the U.S. Congress, three committees of the house of representatives

launched a “major investigation” of possible attempts trump and Giuliani to put pressure on the Ukrainian authorities to support the re-election of the current President of the United States in the presidential election in 2020.

The Chairpersons of the committees of the house of representatives foreign Affairs, intelligence and control appealed to the White house and the state Department with a request to provide records associated with attempts “to manipulate the Ukrainian justice system”.

Former Vice-President of the United States and one of the candidates for President from the Democratic party Joe Biden also called on trump to publish a transcript of a conversation with Zelensky.

“If these reports are true, then really there is no limit to trump’s desire to abuse their power and humiliate our country”, — the politician wrote on Twitter.

An earlier edition of the Wall Street Journal wrote that trump eight times Zelensky asked to help with the investigation of the case against his son’s chief rival in the upcoming elections Joe Biden.

Allegedly the U.S. leader asked his Ukrainian colleague to work with Giuliani. In addition, he suggested that the Ukrainian leader of any help for your cooperation. The material States that Giuliani has repeatedly met with representatives of the Ukrainian government. According to the publication, the White house refused to comment on this information.

The reason for the scandal was the complaint of the employee of the American intelligence for telephone calls trump. Exploration is troubled by some ill-advised phrase of trump, which was about Ukraine. According to the American media, it could be a statement about possible blocking of military aid to $250 million, if Kiev refuses to investigate Biden in 2016 in Ukraine.

Interestingly, a month ago it turned out that trump doesn’t know Zelensky — this became known from the dialogue of the journalist of one of the media, the American leader asked the question about when he invited his Ukrainian counterpart in Washington.

“Excuse me, are you talking about?”

— asked in response to trump.

When a journalist reminded Trump that Zelensky is the President of Ukraine, the American leader has suggested that his visit to the White house to be held “very soon”. The US President added that looking forward to meeting with Zelensky, and called it a “reasonable guy,” reports FAN.

It is worth noting that the intelligence community of the United States is concerned that the President and his entourage to be careless with sensitive data. Allegedly because of these concerns, in 2017, the U.S. secret service, brought from Russia, a source close to the Kremlin. All this, according to media reports, took place in the framework of a covert operation.

Talks trump and Zelensky will be held in the framework of the UN General Assembly in new York on 25 September, reports of NSN.

The founder of Facebook mark Zuckerberg will report to U.S. law

The Turkish authorities will relax the quarantine on may 11

The differences: the Czech Republic offers peace to Russia

Giant Asian hornets killer got to the USA