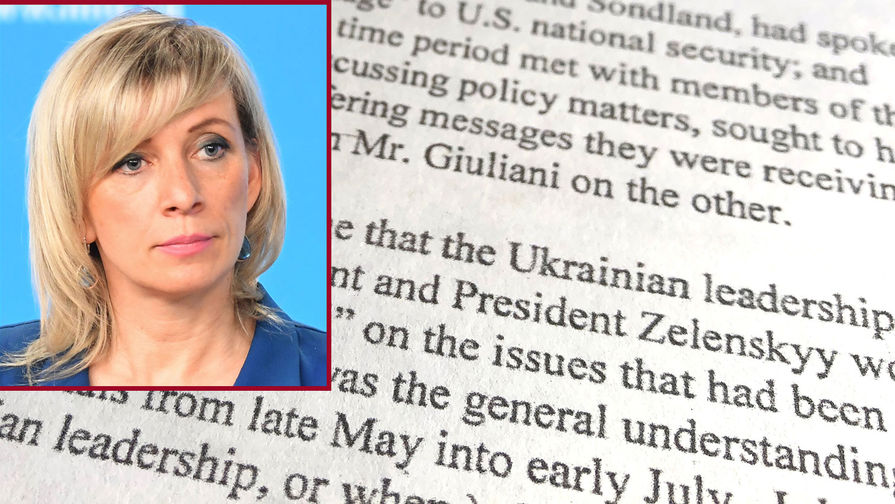 The publication of the transcript of the conversation US President Donald trump with the President of Ukraine Vladimir Zelensky “exposed” the Democratic party, said the official representative of the MFA of Russia Maria Zakharova. According to her, the Democrats have “happened coming out”. In addition, Zakharov noted that the scandal involved the same people, who “demanded the mercy” of WikiLeaks founder Julian Assange. The representative of the Russian foreign Ministry also expressed a desire to “see” with transcripts of the conversations Obama.

The democratic party of the United States “exposed himself” in the course of the scandal of the conversation between President Donald trump with the Ukrainian leader Vladimir Zelensky. This opinion was expressed by the official representative of the Ministry of foreign Affairs (MFA) of Russia Maria Zakharova, the broadcast of “Big game” to “First”.

%”I think what happened, excuse me for this may not be a valid comparison, but it is very succinct: I think the Democrats have us, the people who represent the liberal point of view on international relations, politics and so on, I’m not talking about the economy, is another, namely the political sphere, it seems to me they had some coming out: they exposed themselves,” – said Zakharov.

Foreign Ministry spokesman expressed surprise at the fact that the disclosure of the talks trump and Zelensky was initiated by the same people who “demanded the mercy” of WikiLeaks founder Julian Assange “exactly the same”.

In addition, Zakharova emphasized that the secret documents posted on WikiLeaks, required the world community “to revalue real criminal acts” that the US government was trying “to pass off as righteous.”

In addition, the official predstavitelej of the Russian Federation proposed to publish the transcripts of the telephone conversations of ex-US President Barack Obama. As reported TASS, she encouraged US to share the interviews of Obama with world leaders on international issues.

“We all revere,” said Zakharov, adding that all want to see how American politics is done.

She stressed that the international community interested in some international conflicts related to the activities of Obama as the head of the state, particularly in the middle East and North Africa.

As reported by FAN, the diplomat also said that the publication of the White house transcript of the conversation “once again showed” that Washington negotiate dangerous.

The scandalous publication of transcripts of presidential conversations “have changed the face of the world,” said foreign Ministry spokesman. “Because now, that was probably the third day after this scandal, everyone understands that to call Washington, to negotiate, to meet — dangerous,” she said.

Two days earlier, Maria Zakharova said on the assumption of the speaker of us Congress Nancy Pelosi that Russia is to blame in the ongoing in the USA scandal.

“Given that Nancy Pelosi inflated “scandal over a telephone conversation the presidents of the USA and Ukraine”, that, according to the logic of the speaker, the Russia hand made it to her”,

The scandal surrounding the phone conversation Zelensky trump erupted in the US after the Washington Post, citing sources, reported that US intelligence officials filed a complaint to the administration in connection with the reckless talk of trump on the phone.

Trump supposedly gave to his interlocutor a kind of “promise.” In this 22 Sep candidate for us President from the Democrats, Joe Biden said that it is urgent to investigate the case.

He said that trump allegedly ordered to freeze the distribution of funds to Kiev. However, the US President said that “detained”. “We have paid military assistance, as far as I know,” said trump. In addition, he accused Biden of lying to voters.

The Ukrainian foreign Ministry denies statement about the pressure the U.S. President to Zelensky. The President of Ukraine was surprised at what was published and his words, too — and not just replicas of the trump.

In the transcript of the telephone conversation trump and Zelensky, the President of the United States asks to resume the investigation into Biden. It is worth noting that the U.S. justice Department did not find in the record of the facts of pressure from trump.

Maria Zakharova mentioned Julian Assange. The founder of WikiLeaks was arrested in London after Ecuador refused to grant him diplomatic asylum. Assange has been in Ecuador’s Embassy for nearly seven years. It is known that he was detained at the request of the United States, which accuse him of cybercrime.

When White house reporters asked the President of the United States Donald trump what he thinks about this situation, the politician suddenly said: “I don’t know anything about WikiLeaks. It’s not my thing”.

In 2016, the hackers broke into the email of the National Committee of the Democratic party, and letters intended for internal use, was published on WikiLeaks. It is believed that this caused irreparable blow to the reputation of Hillary Clinton and her chances of success in the presidential race.

Hardwork Istanbul network Ethereum will be held in early October