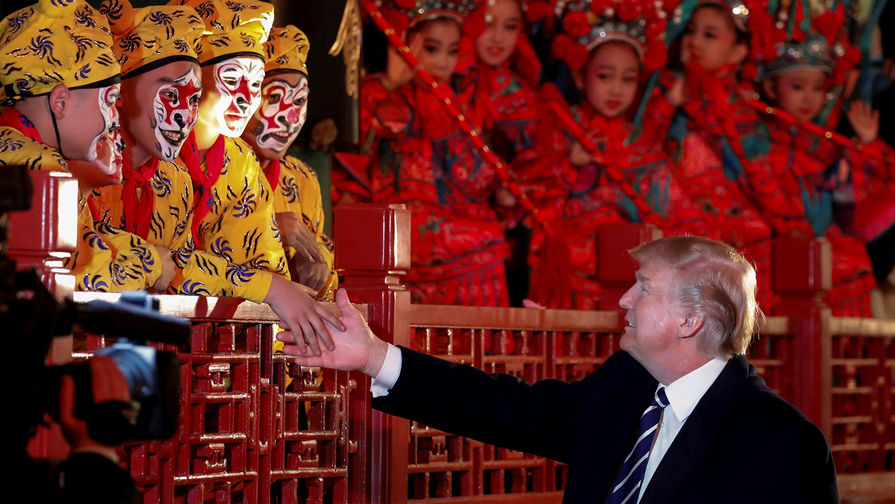 The President of the United States Donald trump believes that China should launch an investigation against the son of Joseph Biden. The leader of the country does not exclude that will appeal to Chinese President XI Jinping request. Earlier in the USA scandal after trump asked a Ukrainian colleague to conduct an investigation in respect hunter Biden, who allegedly involved in corruption.

The American leader Donald trump intends to approach China with a request to conduct investigation against the former Vice-President of the United States Joseph Biden and his son hunter, reports TASS.

“China should launch an investigation against Biden because of what happened in China, about as bad as what happened with Ukraine,” — said trump in conversation with the American media.

The American President did not exclude that may apply to the President of China, XI Jinping: “it is Obvious that this is what we can think.”

However, trump still hopes that the Ukrainian leader Vladimir Zelensky will help him in conducting appropriate investigations in Ukraine.

“I would say to the President [of Ukraine Vladimir] Zelensky, that in your place I would have started an investigation against Biden,” — said the head of the United States.

These words, which were presented in July during a telephone conversation trump Zelensky and called the attention of the intelligence officer, served as a pretext to start the process of impeachment of the American President.

According to published on September 25, the transcript of the conversation Donald trump in a very polite manner once asked him to take steps for the resumption of the investigation against the son of Democrat Joseph Biden, who allegedly was involved in corruption in Ukraine.

“And another thing: many people say the son of a Biden, that Biden stopped the investigation, many people want to know the details of this. So if you can do something about this to do together with the attorney General [USA], that would be great. Biden on every corner crowed about the fact that he stopped the investigation, so if you can address this issue”, — said the American leader to the President of Ukraine.

Shortly before the publication of transcripts of the dialogue of world leaders in the American media published materials, which said that an intelligence officer has submitted to his superiors a complaint that Donald trump tried to persuade Vladimir Zelensky to start investigating activities in Ukraine hunter Biden in exchange for the provision of financial and military assistance to Kiev. It was also noted that the American leader pressed his Ukrainian counterpart.

Hunter Biden appeared in the materials of the investigation activities of the Ukrainian company Burisma Group, the Board of Directors of which he was part. Previously, Fox News referring to ex-Prosecutor General of Ukraine Viktor Shokin, who was involved in the case, said that “it is believed that hunter Biden received a salary, Commission, plus $1 million.” And the investigation was terminated several years ago allegedly due to the fact that the us government has threatened to cancel military aid of $1 billion, reports the TV channel.

After reports in the media that trump asked Zelensky to reopen the investigation, Biden, Sr., which may become a major competitor to Donald trump in the election of the President of the United States in 2020, demanded the publication of the transcript of the conversation of world leaders.

However, on 24 September, the Democrats announced the beginning of the process of impeachment of the American President.

So the House of representatives of the U.S. Congress, in particular, accuses the U.S. President and that he allegedly tried to influence elections by discrediting his rival through the head of a foreign state.

“The behavior of trump as President reveals the dishonorable facts relating to the violation of the President oath, which he gave when he took office, undermining national security and the integrity of our elections,” — noted the speaker of the lower house of Congress, Nancy Pelosi. She also added that the President “should be held accountable, no one is above the law.”

However, the U.S. justice Department has said they do not see the replicas trump any violations of national legislation, reports TASS. In addition, the Agency found no grounds for further investigation or other action.

Himself the American leader considers himself innocent, and as better evidence, he quotes the words of Vladimir Zelensky that he hadn’t pressed.

“The President of Ukraine said that I didn’t put pressure on him, so he did something bad. The best evidence and can not be!” — trump wrote on Twitter.