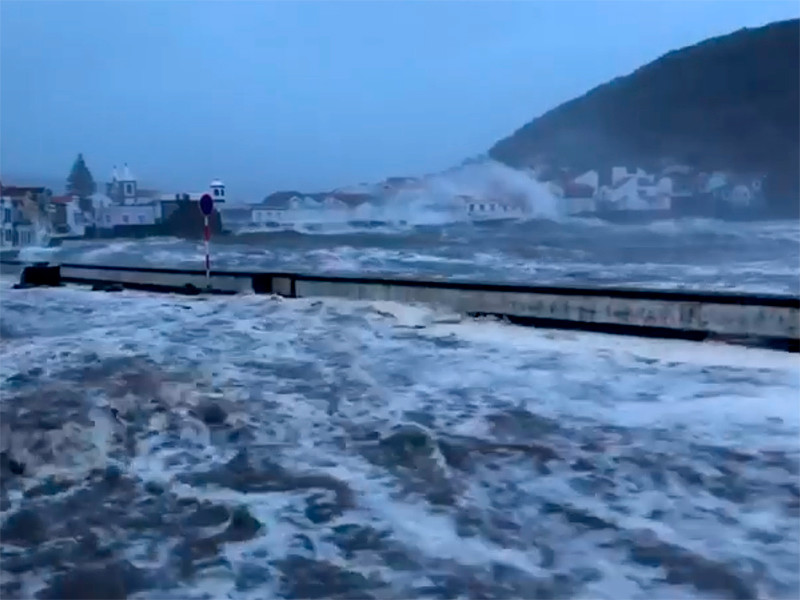 In the Atlantic ocean hurricane “Lorenzo” I passed near the Azores. Currently it is located 480 km North-East of the island of Flores and moving in a North-westerly direction with a speed of 69 km/h wind Speed reaches 140 km/h, informs the national center for U.S. monitoring hurricanes (NHC).

In the Azores continues to operate a warning about the hurricane. Maximum wind gust (163 km/h) recorded on the island of Corvo. Wave height can reach 12 m, according to Stormnews with reference to the RTP.

As a result of floods on the Islands flooded coastal areas, fallen trees, damaged homes. Having problems with electricity supply. According to rescuers, has occurred 127 associated with the rainy weather accidents. Evacuated more than 100 people. Slightly injured 15 people.

According to forecasts, October 3 “Lorenzo” will fall upon Ireland, in the Western half of which Met Éireann has announced a warning to “orange” level of danger. Here are expected for wind speeds of 65-80 km/h and gusts of 100-130 km, storm surge and flooding of coastal areas. For the rest of the island, including Northern Ireland, there is a warning “yellow” level. On 4 October, the cyclone will reach the UK and will continue to move to Western Europe.

Tropical storm “Lorenzo” formed the Islands of Cape Verde, 23 Sep. Then he was moving in the ocean in a North-westerly direction, no threat on land, and became a powerful hurricane. On 26 September, hitting almost in the middle of it, sunk the ship Bourbon Rhode – tug under the flag of Luxembourg, which was carrying 14 people, including 10 citizens of Ukraine.

During the search operation in the life raft, was found alive 3 people, including two Ukrainians. It was later found the bodies of 2 dead.
In search operations involved the French frigate ventô se and Falcon 50 aircraft, and aircraft of the U.S. Coast guard C-130 Hercules, informs the owner of the vessel.

Channel The Weather Channel learned the details of the incident, the coordinator of the Maritime rescue coordination center of China (MRCC) Philip Bricker, who said that Bourbon Rhode, EN route from Las Palmas in the Canary Islands, in Georgetown, Guyana, was almost in the center of a tropical cyclone – a bit North of the hurricane eye. At this time, “Lorenzo” was a 4 hurricane category on the Saffir-Simpson scale. The wind speed reached 210 km/h, and the wave height exceeded 6 meters. Bricker said he did not know why the ship was in the storm.

Hurricane “Lorenzo” in the Azores:

Opinion: bitcoin may repeat the correction of 2018