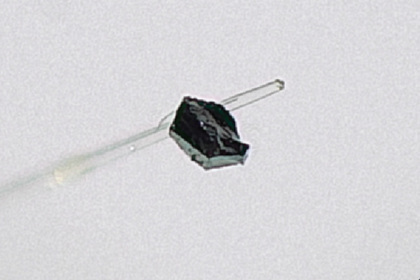 Scientists of the University of Alberta in Canada have discovered a previously unknown mineral inside the diamond, extracted from kimberlite pipe Koffiefontein in South Africa. This publication reports Live Science.

The mineral is dark green in color, which was formed at a depth of 170 kilometers, was named Goldshmidt (eng. goldschmidtite) in honor of the geochemist Victor Moritz Goldschmidt. It is noted that for the crystal formed in the Earth’s mantle, its composition is unusual. It contains a high concentration of niobium, potassium, rare earth metals lanthanum and cerium, although the mantle is characterized by a large content of iron and magnesium.

According to scientists, the discovery of the mineral will help to better learn about the formation of diamonds and other processes. It is known that extreme environments in Earth, including high temperature and pressure, transforms small accumulations of carbon in diamonds that capture other minerals. Later they come to the surface by volcanic eruptions. The thickness of the mantle is about three thousand kilometers, making it difficult to study magmatic processes, however, the inclusions inside the diamond you can get an idea about the chemical reactions under the earth’s crust.

Now the new mineral is in the Royal Ontario Museum in Toronto.

Scientists spoke about the impact of mushrooms on cancer development

Scientists discovered in pigs the ability to use tools