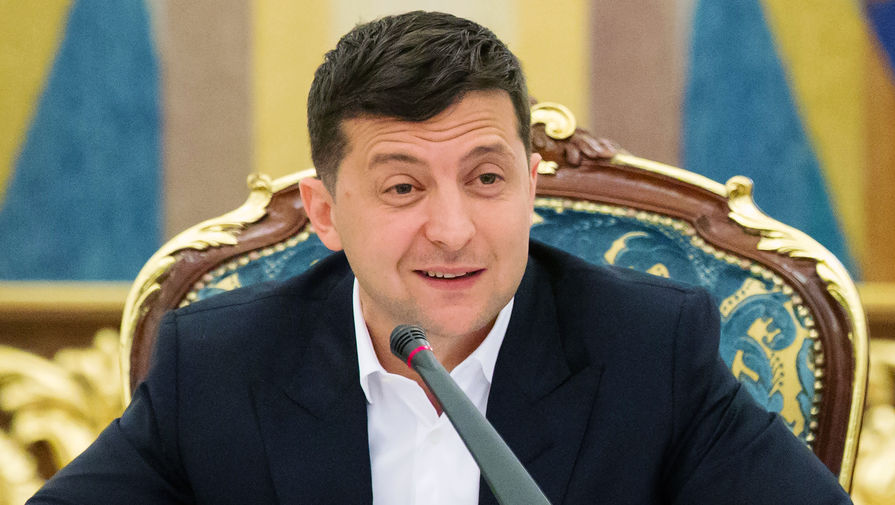 On 14 October, in the Ukrainian cities held rallies against the “formula Steinmeier”. Vladimir Zelensky urged Ukrainians to be reasonable and not to create beautiful images for Russian TV.

In Ukraine, October 14 celebrate the day of defender on the same date of the scheduled rallies, mostly directed against the signing of the Kiev “formula Steinmeier” governing the implementation of certain provisions of the Minsk agreements.

The President of Ukraine Vladimir Zelensky urged those planning to take to the streets of Ukrainian cities, not to succumb to provocations and “create a beautiful picture for Russian TV”.

“I ask you: be smart, act responsibly, within the law and public order”, — wrote President in his address on Facebook.

Protests against the “formula Steinmeier” rocked Kiev and several other Ukrainian cities, starting from the day of its signing — October 1, 2019. The most numerous rally today gathered October 6 — then on Independence square in Central Kiev came out, according to various estimates, from 5 to 10 thousand people. The implementation of the “formula” protesters call “the surrender of Ukraine”.

However, the very “formula” does not imply anything fundamentally new, it just rearranges the sequence of the individual points of the Minsk agreements, which were signed by representatives of the former Ukrainian authorities. The mechanism suggests that in the territory of “certain districts of Donetsk and Luhansk regions” (as Kiev calls the uncontrolled territory of the DNI and LC) elections are held in accordance with Ukrainian legislation, their results will be recognized by the OSCE, and after that will enter into force the law “On special order of local self-government.”

Now the ex-President of Ukraine Petro Poroshenko, which, in essence, agreed to the implementation of agreements, trying to lead the protest activity of the Ukrainians.

“Formula Steinmeier” was invented in the Kremlin protects Russian interests. Taking a “formula Steinmeier”, Ukraine had voluntarily renounced the road map for the implementation of the Minsk agreements, which was supported by our German and French partners”, — said Poroshenko in the Verkhovna Rada on 2 October.

The representatives of party Zelensky “servant of the people” their vision of protest activity in Ukraine. The Chairman of the faction in the Ukrainian Parliament David Arakhamiya announced that it plans to submit to the security Service of Ukraine the evidence of possible bribery of protesters.

“I want to publicly apologize to all the participants of the action “No surrender”, which came there at the call of his heart and soul. I had no intentions to offend them, but it so happened that I did it — for that I apologize.

The rest of the information that I have, I will on Tuesday in the office of the security Service of Ukraine”,

Prior to that, head of the office of the President of Ukraine Andriy Bogdan said that the protesters against the signing of the “formula Steinmeier” allegedly offered 100 hryvnia (about RUB 262 at the current exchange rate) for each hour at the rally. Another 10 hryvnia participants could earn if you bring posters or brought their friends and acquaintances.

By the way, Russia does not recognize the claims of the members of the Ukrainian protests in the sense that the implementation of “formula Steinmeier” is allegedly Pro-Russian way of resolving the situation.

Moreover, the Minister of foreign Affairs of Russia Sergey Lavrov believes that the “formula” in its current form is a concession compared to the original text of the Minsk agreements.

The head of the Russian foreign Ministry recalled that initially it was assumed that the law on the special status of Donbass will enter into force and will be fixed in the Ukrainian Constitution, and only after that in these areas after the election. However, Poroshenko then said he did not know who in the end will choose, and refuse from such a sequence of actions, Lavrov said in an interview with channel one.

As the average variant and was offered a “formula” action. The author acted who was at that time foreign Minister of Germany (now Federal President) Frank-Walter Steinmeier.

“This is a compromise and concession”, — said Lavrov, adding that “plan B” under the Minsk agreements will be no more.

With the date of the meeting of leaders of the Normandy format (France, Germany, Russia and Ukraine), which are the guarantors of implementation of the Minsk agreements, is still not defined, since the condition for its realization is the dilution of military forces in the Donbas. However, this process is frustrated several times last week. However, Zelensky President of Ukraine expects that this meeting will be possible in November.