Peter Scott-Morgan, the robotics expert from the UK who was diagnosed with amyotrophic lateral sclerosis, has decided to become the “first real cyborg”, gradually replacing all of her body and even some of the brain mechanisms. This disease leads to paralysis and is a great danger to life, but Morgan hopes that the body and will allow him to not just “survive” but “thrive”. 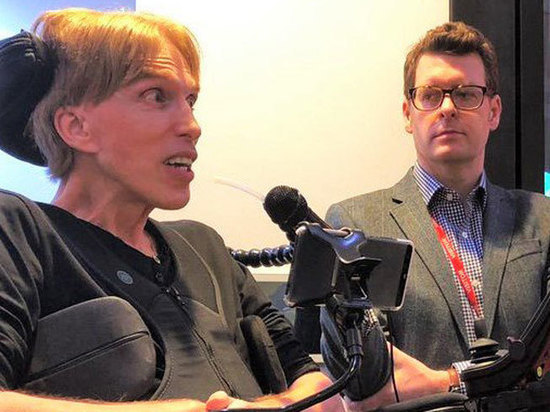 The most famous person who is faced with amyotrophic lateral sclerosis, was Stephen Hawking – theoretical physicist and popularizer of science, one of the founders of quantum cosmology and the author of the bestseller “a brief history of time”. The glory of physics brought the assumption that black holes can “evaporate”, emitting at a quantum level particles. Subsequently, this process was called “Hawking radiation” in honor of its discoverer. The idea of the scientist significantly the beam to understand the nature of black holes – regions of space-time, can attract even light. A significant part of its life Hawking worked, despite the fact that his disease has led to paralysis, and communicate with others thanks to the scientist in the wheelchair with the speech synthesizer. In 1963, experts have suggested that to live, Stephen Hawking was no more than two and a half years, but he lived a much longer and very full life. Hawking died in March 2018.

Shortly after the death of Stephen Hawking MK wrote that in one only Russia amyotrophic lateral sclerosis suffer from 8 to 12 thousand people.

Peter Scott-Morgan has already undergone many operations. A special chair allows him not only to move quickly, but also to translate the body in a horizontal or vertical position, and the other “improvements” greatly simplify the process of nutrition and the process of getting rid of the products of food processing.

One of the more recent surgeries, laryngectomy, deprived him of his physical voice, however, eliminated the risk that the scientist will choke with a saliva. This scientist had previously recorded his voice and “digitized” it, and in the future to “speak” for him and to demonstrate his emotions will have a three-dimensional model of the head researchers at the computer screen.

Scientist suggests that further “upgrades”, including implantation of electronic components in the brain, will one day allow him to become almost completely cybernetic organism, able to interact freely with the outside world and still remain themselves. All five senses of the new body will be even stronger than in the body of the human, counting a specialist.

Peter Scott-Morgan hopes that his ambitious plan in the future will help not only him personally, but many other people faced with disabilities.