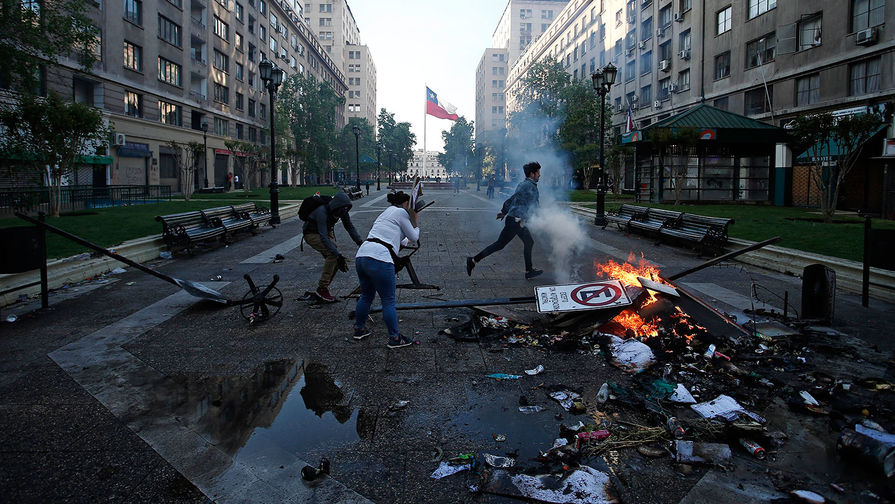 Chilean President Sebastian Pinera has announced the development of measures of social support to resolve the situation with the protests continued in the country since last week. The main cause of the riots was a strong economic inequality. However, Chilean society is divided not only because of this. What is the root of the protests in the most prosperous South American country — in the material “Газеты.Ru”.

Despite concessions from the government, the Chileans continue to take to the streets of their cities to speak out against economic inequality and costly services in the areas of education and health.

The authorities have already abolished the increase fares on the subway — the formal causes of mass protests and clashes — however, these measures are not enough.

On Tuesday, Chilean President Sebastian Pinera said in his address that the government will submit to the Congress a number of measures of social support to resolve the situation with protests and riots.

“We will submit for consideration by the Congress this social agenda in accordance with the law and start implementing it when the government gets this opportunity,” said Pinera.

The epicenter of the protests was the city of Santiago. On 14 October the government announced the fare increase on the metro to 850 pesos (76,74 RUB), the ticket price has increased by 30 pesos (2,56 rbl.). Young people began to jump over the turnstiles, they were stopped by the police, which led to clashes and spontaneous demonstrations.

Rigid actions of law enforcement authorities provoked even greater resentment of the Chileans. In 10 of the 16 regions of the country was introduced the state of emergency — for the first time after the fall of the dictatorship of Augusto Pinochet. Thus, the government has authorized the deployment of military personnel in these areas. October 19 in the center of Santiago was contracted armored vehicles.

As a result of protests killed at least 15 people, 62 policemen and 15 civilians were injured.

Some flights at the airport of the capital were cancelled or delayed. The supermarket chain Walmart announced the closure of its stores after 60 of them were injured during the riots. The fire in one of the supermarkets in Santiago, three people were killed.

In addition, during the protests had caused significant damage to the subway stations. According to La Tercera, according to preliminary data, the damage is estimated at $200 million of the 136 stations 77 damage, 20 fire occurred, nine burned entirely. Capital metro has suspended work.

More than 20 thousand families in the Chilean capital were left without electricity, said the mayor of Santiago.

“We are fighting against a powerful and implacable enemy who has no respect for anything or anyone, and willing to use violence without any restrictions, even if it means the loss of life, with the sole aim of inflicting the greatest possible damage,” said piñera in a televised address on Sunday and cancelled the increase of prices on the subway.

If the President of Chile hoped that in this way will calm the protesters, he was wrong. First, the head of state led to increasing irritation with his statement about the war against “the enemy who does not respect anything or anyone”. Secondly, the indignation of Chile piñera caused by the fact that in the midst of the protests, the journalists caught him having lunch with family at pizza hut. Finally, the increase fares on the subway was not a key cause of mass protests.

Chile is the most prosperous country in South America. In the second half of the XX century the country began to move toward reform. However, when Augusto Pinochet was a radical economic reform.

The reign of Pinochet, of course, included in the country’s history as the era of the dictatorship. However, many political scientists and economists call this ruler and his team, authors of the Chilean “economic miracle” — the country became a model for all other South American countries.

However, the reign of Pinochet remains for Chileans is still quite fresh injury, and any Association with the dictator provokes a painful response.

The sore spot of Chileans

The poverty level in Chile has decreased steadily every year, and the average wage is increasing. All evidence of improving economic conditions, with the gap between the rich and poor remains too large.

Of the 30 most prosperous countries, Chile ranks the highest in terms of economic inequality, according to the Organization for economic cooperation and development. However, this figure was declining, but not fast enough. In 2006, rich Chileans earned ten times more than the poorest. In 2017, the difference was reduced to 8.9 times — it was not enough.

Sebastián piñera — himself one of the richest men in Chile. In politics he came from business activities in 2014 Forbes magazine estimated the state Pinera $2.4 billion in State politics with this economic inequality is now operating on the protesters like a red rag to a bull.

Education, or rather, its availability is one of the main topics for Chileans. In General, the possibility of obtaining concerned about the education of the people of all Latin America. In Chile, however, with this issue all the more complicated.

In the second half of the twentieth century President Eduardo Frei came to grips with social policy. In particular, he has made education accessible for children from poor families. Under Pinochet, education and health passed into private hands and once again became a symbol of the privileges of the rich.

In 2011, Pinera decided to raise the average cost of tuition and to differentiate payments depending on their academic success and social origin. The initiative of the President returned to the Chileans to the days of Pinochet, any hint as to the privilege of education in the country perceive with indignation.

In addition, Sebastian Pinera, in General, is perceived by Chileans as a follower of Pinochet, said in a conversation with “Газетой.Ru” chief researcher of the Institute of Latin American Academy of Sciences Vladimir Sudarev.

“He denies the title, but nevertheless considered in the Chilean society of his followers, at least in terms of economic reforms of the neoliberal Chicago model,” — said the expert.

The basis of the protest movement were students. Chilean youth are active enough, and to pacify her ardor is not so simple.

“There is a very active society, active students, if you raise the price of gasoline or something else, it is a powerful protest. Because Chilean society after the Pinochet still divided and this page Pinochet is not closed”, — said Vladimir Sudarev.

Social reforms are always welcomed by the Chileans. Against this background, gradually began to rise in popularity of leftist movements.

Sebastian Pinera is a member of the center-right party “National update”, a member of the coalition “Alliance for Chile”. He first took part in presidential elections in 2005. Then the victory went to the left politics Michelle Bachelet.

Pinera won the rematch in the next election, in 2010, Bachelet regained the presidency in 2014. She, unlike his predecessor, decided to make all education free by increasing taxes for corporations, which of course cost them dearly. Concerned business representatives and facilitating the return of piñera.

“Pinera came to power for the second time in 2018, largely because the society is tired with the centre-left Bachelet. It’s tired, it required some changes, and he promised these changes, but change he did, he did only for the worse,” — said Vladimir Sudarev.

With the arrival of piñera to the process of social reforms stalled again expected, which again contributed to the growing popularity of left-wing parties.

“He does not refuse any reforms, for example, those that began the previous President Michelle Bachelet. It has introduced a number of reforms, and the current President didn’t say anything about what is going to revoke them and so on. But since this neo-liberal model is quite a market — there’s this social protection is not very strong,” said the head of the Center for political studies, Institute of Latin American Academy of Sciences Zbigniew Ivanovo.

So 15 years of alternating left and right politics led the country revealed another split. Chilean society is polarized not only by economic status but by political affiliation.

“There is such a polarization — if earlier it was possible to speak about social polarization, the gap of income, now is reinforced by political polarization. In Chile changed the electoral system: before there was the so-called binomial system, that is, almost two coalitions fought among themselves for power, and then the rest were to join any coalition, otherwise they had no chance to pass.

Now this system was canceled, now, let us say, proportional system, and here’s a shot of the left all. There are mainly social movements, parties, new is for — there’s not even parties, but such social movements are different,” — said Zbigniew Ivanovo.

The problem, however, is that Chile, though, and the exemplary Latin American country, but now she still has to choose between economic growth and social equality. None of the politicians will not be able to satisfy both requests simultaneously.

“Therefore, the society is divided: one for the left-nationalist option (Michelle Bachelet), others for the tough neo-liberal course Sebastian piñera,” says Vladimir Sudarev.