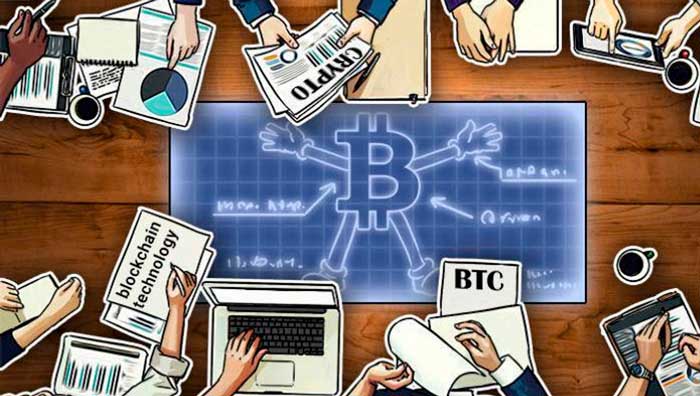 Buyers managed to show a good rebound. At the moment assets like bitcoin and the Bitcoin Cash, look very interesting in the context of continued growth. Moreover, if the graph BCH/USD can be seen forming a reversal pattern of an inverted “Head and shoulders” in favor of growth, BTC is still just getting ready to leave the canal and continue steady upward movement.

Unfortunately, the assets Ethereum, Litecoin and EOS still remain under pressure. There are several signals with daily charts in favor of downward movement. However, if the bulls manage to break resistance levels, then those assets will be ready to move to a phase of sustained growth.

In General, the cryptocurrency market seems ready for the beginning of a new wave of rise. The bulls only have to keep current levels and rise slightly higher, to deny bears any chance of downward correction.

The quotes shown aggressive rebound from the support level. However, the price tested resistance at the downtrend line near $9800. For a full extension of the lifting by the buyer it is important to “push out” rates are even higher.

A good signal of the likely continuing growth is a breakout of the downward trend line on the RSI indicator. In most cases there is a return to the broken line, then we can expect continued growth. As the main ideas can make a minor correction to $7700, then we can talk about the bounce and move up.

The cancellation of this option would be the drop in prices of digital asset below $6875, which indicates a breakout of the lower border of the channel and continue falling. 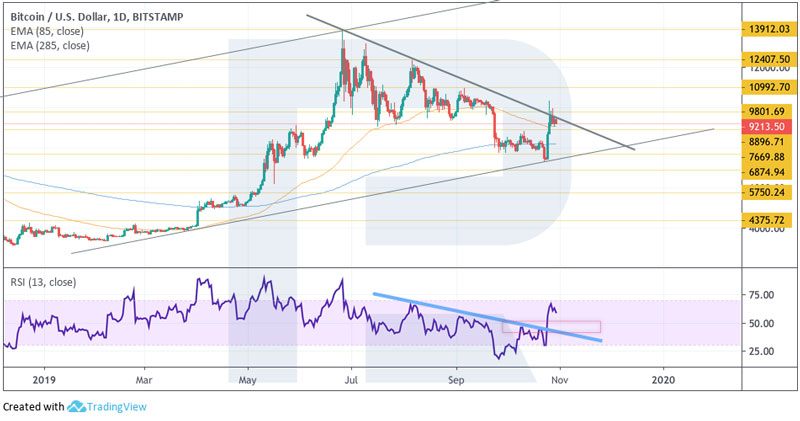 On 4-hour chart quotes cryptocurrency was able to leave the short-term downside channel. This signal appears to be the first sign of a potential reversal of the current downward correction. However, a confirmation of the completion of the fall will be strong growth with the consolidation above the level of $10 995 that indicates within the descending channel. In this case, the goal of the movement will make the $12 405.

The value of the RSI indicator has bounced again from the resistance level, so you should expect lower and test the punched border of the channel. After this movement you can talk about the beginning of the growth towards the goal at $10 995. 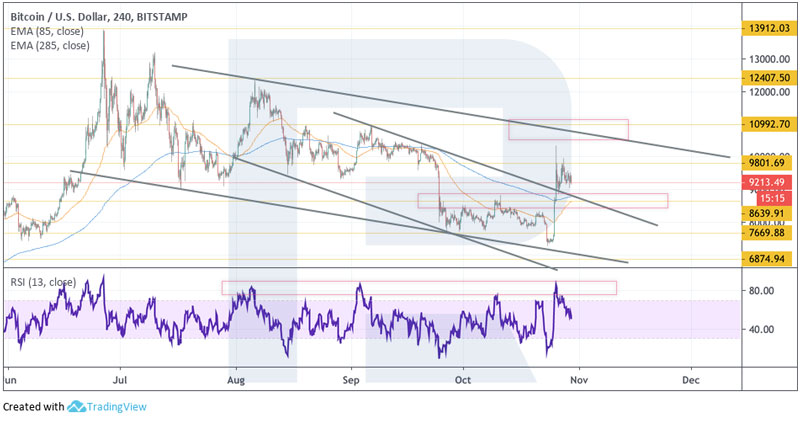 Buyers of Ethereum also managed to keep quotes in the area of support is at $147. At the moment the price once again returned to the area between the moving averages, which could trigger an attempt to further reduce.

In favor of this option is the rebound from the descending resistance line on the RSI indicator. As the main idea is expected to rebound from lower border of ascending channel and continue falling to the first target at $147. Its breakthrough will open the way for a movement of prices towards $100. Cancel the negative option would be a breakout of Moving averages and consolidation of ETH/USD above the level of $239. In this case we can speak about the continuation of the rise to the target at $280. On 4-hour chart quotes are clamped within the descending channel. The value of the RSI indicator is once again testing the resistance line, so expect a rebound and the drop in prices of digital asset to a level of $150.

In favor of this option will also perform a test of the upper border of the descending channel. The cancellation of the proposed forecast will be a break out of resistance level and consolidated above $202, which indicates the yield quotations outside of the rising channel. In this case, the purpose of rise of level will be $239. 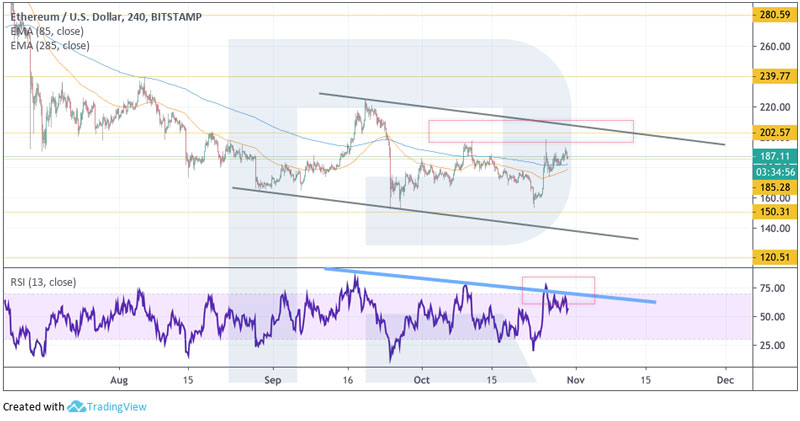 Forecasts financial markets are private opinion of their authors. The current analysis is not a guide to trade. RoboForex is not responsible for the results that can occur when using trade recommendations submitted reviews.

Publication date 30.10.2019
Share this material on social networks and Express their opinions in the comments below.