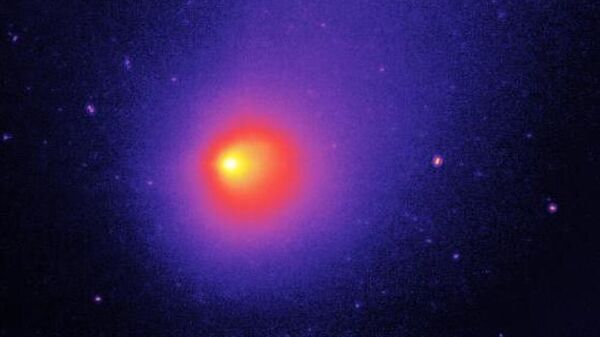 Astronomers have found a region, located beyond the orbit of Jupiter, through which many comets come into the Solar system. The discovery was made using computer modeling and confirmed by observations of real objects. The results were published in the journal the Astrophysical Journal Letters.

Most comets come to us from the farthest reaches of our Solar system, the so-called zone of scattered disc. Or from outer space that confirms the discovery of the first interstellar comets 2I/Borisov. In addition, between the orbits of Jupiter and Neptune there are a large number of icy bodies known as centaurs, which probably come from the Kuiper zone, located beyond the orbit of Neptune.

The centaurs give rise to a large family of short-period comets (currently there are about thousands of) of comets of the Jupiter family (JFC). These cosmic bodies also penetrate into the inner part of the Solar system. Many of them were visited by space mission: 9P/Tempel 1 (Deep Impact mission), 81P/Wild (Stardust), 67P/Churyumov-Gerasimenko (Rosetta).

American scientists led by Gal Sarid (Gal Sarid) from the University of Central Florida have developed a computer model that allowed to reproduce the trajectory of comets and asteroids on the outskirts of the Solar system in its inner part. Scientists have modeled the path that are icy bodies from the Kuiper areas and more distant areas and as they passed through the orbits of the giant planets, becoming centaurs, and comets JFC.

To better understand how the centaurs turned into the JFC, the research team created a computer simulation of the orbit of comet 29P/Schwassmann-Wachmann 1 (SW1) — centaur, discovered in 1927 and has about 65 kilometers in diameter. Comet SW1 has been selected as the object of study, as the nature of its orbit and the high activity level, it occupies an intermediate position between the centaur and JFC. Then the orbital parameters obtained for SW1, researchers compared with other similar bodies.

“The findings of our modeling led to several results, fundamentally changing our understanding of the evolution of comets”, — quotes the words of one of the study’s authors Walter Harris (Walter Harris), the press service of the University of Arizona. — “From the new centaurs, who we tracked down with the help of computer simulation, it was found that every fifth entered the orbit, the same orbit SW1, at some point in their evolution.”

In addition to clarifying the nature of the orbit SW1, the study led to an even more surprising discovery. It turned out that between the orbits of Jupiter and Saturn there is a region through which passes most of the comets. How would focusing the trajectory of their movement, this area acts as a “cometary gate” that guides the centaurs in the area of the inner planets. Now SW1 is located in this area. The results also showed that the area of the “gate” of icy bodies pass very quickly — within a few thousand years.

Based on these estimates of the size and speed of objects passing through the “gate”, and scientists thought that there must be about a thousand comets JFC. To date such objects discovered about 500.