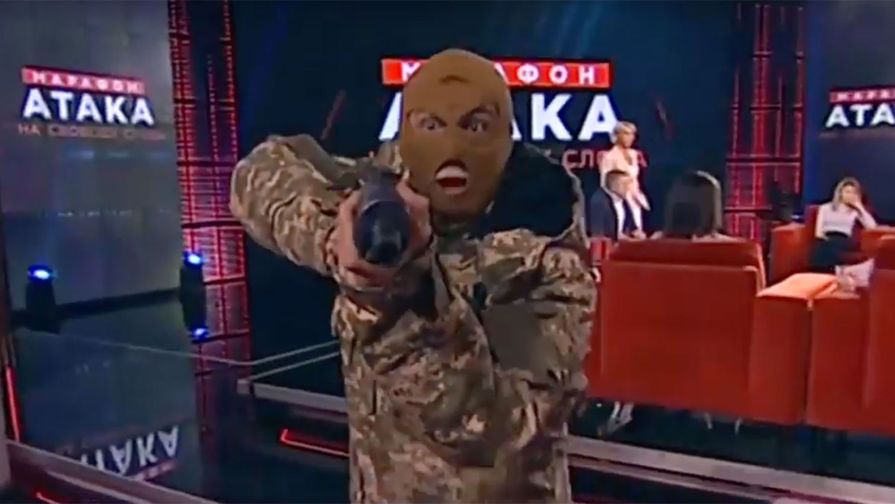 Ukrainian TV channel literally one minute “captured” three unknown persons in masks and camouflage. They suddenly broke into the Studio during the talk show “Attack on freedom of speech.” Brandishing a weapon, men were running around the Studio and demanded that they all sat in their seats. If guests and presenters understand that this is a joke, the crowd hid under the bleachers.

In the Studio of the Ukrainian TV channel “Direct” the sound of shots rushed armed men in masks and camouflage. It happened during the telethon “an Attack on freedom of speech.” For credibility one of the leading — Mykola Veresen ‘ — fell to the floor, allegedly injuring him. The rest — co-host of Veresen and experts continued to quietly remain in their seats and watch. The crowd hid under the bleachers.

The intruders ran through the Studio, brandished guns and shouted in Russian, demanding who was in the Studio to “sit in places”. “Everyone freeze! Calm down everybody! Where [presenter Mykola] September? Where September, I ask? Mykola? Alive?” — shouted one of the men running around with guns in their hands.

The presenter at this time was lying on the floor. At the end of the campaign, all “attackers” took a selfie with the hosts and wished them good ether. The comic performance posted on YouTube.

One of the guests of the show said: “People hiding, they do not understand that this is a joke”.

Meanwhile, the Russian TV presenter Olga Skobeeva ironically commented “submission”. “Gone mad! But from the point of view of diagnosis — right landmark video,” she wrote in the Telegram channel.

Not spared “capture” “Direct” and Internet users. Most of the commentators have sharply criticized the action. “In a madhouse the day,” said SG. User under the name Igor Cheb shamed the organizers of the “joke”: “Well, you are flawed… You ever think about those elderly people who fear began to hide?”

At the same time, the user Alexander noted that “in principle, everything is fine, there in the Studio audience are no better, sitting applauded”.

Meanwhile, the Ukrainian media associated with the staging of searches from the owner of the channel, which previously held the law enforcement. About it on November 7, said “Direct”.

“The owner of the channel “Direct” Vladimir Makeenko carry out searches. The channel takes these actions as pressure and attack on freedom of speech”, — is spoken in the message.

Thus, according to the TV station, the investigator who conducted the searches, “declined to say what law enforcement Agency he represents.”

Subsequently, reporters learned from the Concierge that the owner of the TV channel allegedly received investigator with the State Bureau of investigation (GBR) Roman Davidovich.

A total of five law enforcement officers conducted searches. “A search occurs by court order, but law enforcement declined to say what it is and what matter”, the message reads “Direct”.

The press service of the RRT noted that the Bureau “carries out investigative actions within investigation of production according to the sales channel “Direct”, transfers “Radio Freedom”.

The party of “European solidarity”, said that a search of the Makeenko associated with the former first Deputy head of the presidential administration Andriy Portnov, indicates “Direct”. Policy associate searches Makeyenko that the channel “does not sing praises to the President [of Ukraine Vladimir] Zelensky”.

Currently, the state Bureau investigates the possible evasion of the ex-President of Ukraine Petro Poroshenko from the payment of taxes in the purchase channel. Poroshenko allegedly issued to the media “off-shore company”, which formally belonged to the “former party of regions member [Vladimir] Makeyenko”. About this earlier said the Deputy head of the administration of former Ukrainian leader Viktor Yanukovych Andriy Portnov, who wrote applications to the RRT claiming that the former head of Ukraine was laundering money when buying media.

However, the name of Poroshenko appears in 12 criminal cases. However, he is not in for questioning in the RRG. Earlier, a spokesman for the state Bureau Angela Ivanov noted that he once again came to the office.

“He didn’t show up for the umpteenth time, if I’m not mistaken, it was his 17 failure to appear for questioning,” — said the representative of RRT, adding that we are talking about the case of illegally crossing the border when he went to the Maldives.

A Saudi Prince accused of concealing repression for successful reforms