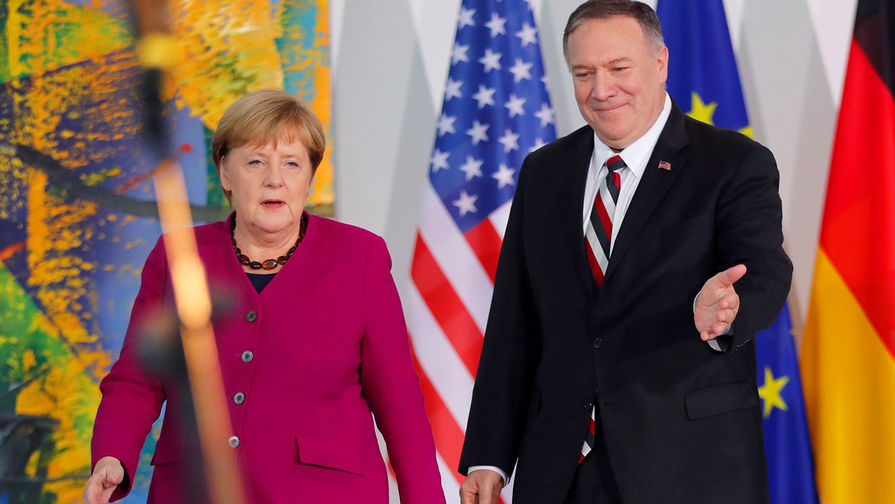 U.S. Secretary of state Mike Pompeo called German Chancellor Angela Merkel “a great friend of Washington,” noting the close relationship of the two NATO partners. While in fact in recent years the relations of Berlin and Washington are going through hard times, and the Atlantic Alliance shattered.

German Chancellor Angela Merkel and US Secretary of state Mike Pompeo held a meeting in Berlin on the eve of the 30th anniversary of the fall of the Berlin wall. NATO partners continue to insist on the close linkages and mutual support, despite the rather significant differences in the political field.

During a joint press conference, Merkel said that Germany “never forget” the role the US played in the reunification of Germany to the GDR, and the fact that the two countries “have become such close friends.”

In turn, Pompeo was supported by the opinion of the Chancellor, and added that Washington values its close ties with Berlin, in spite of some problems.

“We will continue to work on these [issues] together,” added the Secretary of state.

Merkel also noted that the United States will continue to support Germany in international crisis management. She also assured Pompeo that “Berlin wants to play an active role in solving problems,” such as the conflicts in Afghanistan, Syria and Ukraine.

“Germany is an important partner of the U.S.,” said Pompeo, calling Merkel “a great friend of Washington.”

At the same time, speaking earlier in Berlin, the head of the American foreign Ministry said that the Alliance must maintain their performance so as not to become obsolete.

“NATO must grow and change, must face the challenges of today… NATO is in danger of become obsolete, if not will do the things necessary to find answers to the challenges,” said Pompeo.

It’s hard not to notice the deterioration of cooperation Germany and the United States recently, including in the framework of NATO. And not the last role in this played the American leader Donald trump.

The White house has repeatedly criticized the country’s unit for failure to raise defense spending to 2% of GDP, focusing on Germany. In particular, the President threatened the United States Berlin the reduction of U.S. troops on German territory.

Trump has made it clear that he was ready to relocate us soldiers in Poland, despite the clear violation of the Founding act Russia — NATO, which prohibits placing “substantive” amount from the military Alliance near the Russian border. Official Berlin has responded to US threats with restraint, promising to increase defense spending over 10 years.

However, as Pompeo said today, “if countries think that they can get protection without providing the necessary resources if they are to fulfill the obligations, there is a risk that NATO will become ineffective or outdated.”

However, in addition to NATO between Washington and Berlin, there are contradictions on a number of key issues on the international agenda. In particular, the US and Germany do not agree on the Iranian nuclear deal, which stopped the development of Tehran.

The deal was concluded with Iran in 2015, with Russia, Germany, Britain, France, USA and China. The essence of the agreement was that the Islamic Republic will produce low-enriched uranium under IAEA control, and the international community will lift the sanctions. In 2018, the US left the agreement — trump said that it harms the interests of Washington. The United States also imposed sanctions against Iran’s oil sector.

Germany, along with the other parties to the transaction disapprove of the decision of Washington, because in response, Iran began to gradually suspend its obligations under the agreement and to increase the percentage of uranium enrichment, which naturally increases the tension in the middle East.

It is worth noting that the Iran deal is not the only international agreement that the United States broke for the last time. So, Russia and America withdrew from the Treaty on the elimination of intermediate and shorter-range missiles (INF Treaty) in August. This first step did Washington. The agreement between the US and Russia destroyed a whole class of armaments in Europe, and its collapse is extremely concerned about Germany. Berlin has repeatedly urged Moscow and Washington to return to compliance with agreements to prevent a new arms race.

In the context of the collapse of the INF Treaty the German government is also concerned that the US will leave and other international agreements. For example, Berlin is concerned about the fate of the Treaty on open skies (DON). Washington in October allowed the possibility of suspending its obligations. Germany is confident that such actions by the US will further worsen the situation in the world regarding arms control.

In addition, Berlin and Washington have taken different positions regarding the Russian gas pipeline “Nord stream — 2”. The United States called the draft was politically motivated, insisting on the risks of increasing Russia’s influence in Europe. Germany also supports the construction of the pipeline, noting its economic benefits for the European region.

Economic relationship of the parties is also far from ideal: trump previously imposed restrictions for Canada and the EU on imported steel in the United States, including from Germany. “Anti-dumping decisions,” the American leader has jeopardized thousands of jobs in Germany.

Germany, like other European countries, have repeatedly expressed their indignation at the decision of trump. The European Commission, the US actions are called “a flagrant intervention in order to protect American industry.”

Restrictions trump had a negative impact on the German economy, which shows the collapse of the German index of business activity in industry and services (PMI). In September, he fell from 49.1 to 46.3 and reached the lowest level in nearly 10 years — since may 2009 (the decline in the economy, analysts say, begins with the index below 50 points).

While currently there are no prerequisites for improving relations between the two countries — Bild analysts have repeatedly noted that between trump and Merkel there is no “chemistry” for dialogue. While it is quite difficult to predict, will the situation change in case of change of leaders of Germany and the United States. American presidential elections will be held all through the year, and Merkel has already announced that he will retire in 2021.

Here someone with gorochki has slipped... Bah! Yes this is again the Russian car market!

Hardwork Istanbul network Ethereum will be on December 4

Millions of people facing hunger because of the quarantine and coronavirus