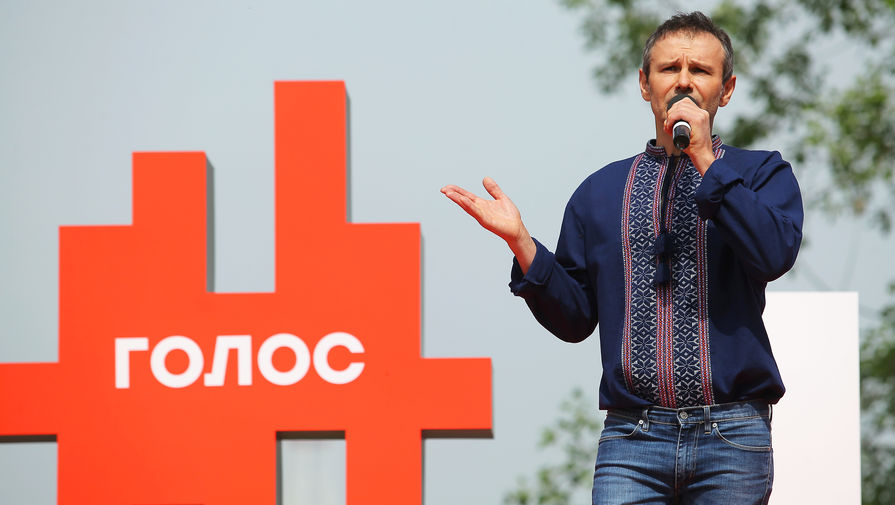 Ukrainian party “the Voice” musician Svyatoslav Vakarchuk urged Kiev to withdraw from the Minsk agreements and to strengthen military and economic potential of the country, and then to regain the Donbas.

Ukrainian party “the Voice”, whose leader is the soloist of the musical group “Okean Elzy” Svyatoslav Vakarchuk, said that Ukraine should withdraw from the Minsk agreements and to accumulate economic and military capabilities, and then to return Donbass under his own power, and – in the conditions of Kiev.

As indicated in the statement of the party in Facebook, to recapture the Donbass by force at the moment Ukraine can not, because APU is not ready for this physically. However, the output of the Minsk agreement will allow Kiev to not be compelled to withdraw the army from the separation line in the Donbass.

“Time to recognize reality and withdraw from the Minsk agreements. It does not depart a single step back: neither the military or diplomatic fronts. We must strengthen the military capabilities of Ukraine and to be ready to outweigh in their favor violent confrontation. To create a stationary military bases, to restore order in rotation, the infrastructure and the support of the army”, — stated in the post.

The policy also stated that the Minsk agreement even if compliance would be disadvantageous to Kiev, because then in the Donbass elections will be held, but control over the Russian-Ukrainian border in these areas, the Ukrainian authorities will not. For the same reason, in the “Voice” expressed skepticism about the meeting, “Norman Quartet”, indicating that the West simply will force Georgia to peace on unacceptable terms.

In addition, the party explained that in the case of implementing the Minsk agreements, international sanctions against Russia may be loosened, and the policy of “Voice” called to prevent this.

While the text is the expression “war with Russia”, while Moscow has repeatedly stated that a military conflict in the Donbass is domestic in nature.

In addition, previously the head of the Special monitoring mission of the OSCE Ertugrul Apakan has officially announced that the Russian troops are not a party to the conflict between Kiev and self-proclaimed national republics, reports of NSN.

Three days earlier, the Kremlin has expressed deep concern over the statements of Kiev and representatives of samoprovzglashenny Donetsk and Lugansk national republics on the failure of the breeding of the forces in the Donbas. According to the press Secretary of Russian President Dmitry Peskov, Moscow is upset with what is happening and closely monitoring the situation in the Donbass.

The decision on disengagement in Donbass, the representatives of Ukraine, the self-proclaimed Donetsk and Luhansk people’s republics (DPR and LPR), Russia and the OSCE signed in September 2016.

In accordance with these arrangements in the region had to create three pilot zones of security: Golden, Petrovsky and Luhansk. The first two paragraphs of the troops threw up almost immediately, but in the area of Stanytsia Luhanska, the process was delayed and the previously derived military unit of Gold and Petrovsky went back again.

Then on 1 October, the contact group signed the “formula Steinmeier,” which helps to implement the Minsk agreement.

In addition, the negotiators agreed on the breeding of the forces in the remaining areas. It was planned that the full withdrawal will be completed by mid-October. However, according to representatives of DND, the Ukrainian security forces disrupted this process.

November 1, head of mission of LC in the Joint center for control and coordination of ceasefire Michael Filonenko said that Kiev and Lugansk completed the process of withdrawal of forces from the Golden.

More than 3.3 thousand civilians were killed in the armed conflict in the Donbass. This is stated in the report of the office for the coordination of humanitarian Affairs, said on Twitter the United Nations.

Injured during the war received 9 thousand. Internally displaced people in Ukraine were forced to become about 1.3 million people. A further 3.5 million people in the region need help. The line of contact with a length of 427 kilometers blocked access to essential social services, says the UN report.

Ukraine is not ready for direct talks with the leadership of the breakaway republics. This was said by the President of Ukraine Vladimir Zelensky, although this requirement is one of the essential points of the Minsk agreements, signed in Kiev.

Dynamics of the new Chevrolet Corvette has surprised even its creators

The Russian patrol was stoned in Syria

Russia was the last in the approval ratings of world leaders

In Tajikistan, identified 43 new cases of coronavirus during the day

Chechnya is not Afghanistan: Kadyrov condemned the United States for the war and sanctions