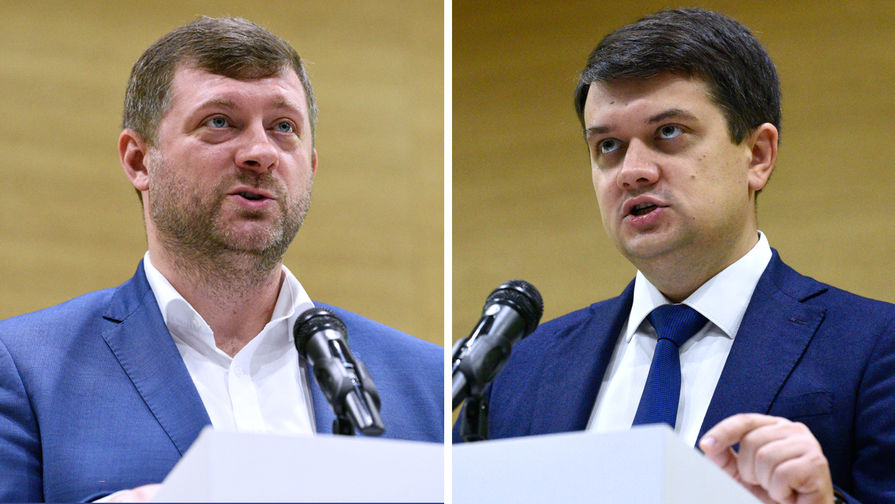 Speaker of the Verkhovna Rada Dmitry Razumkov resigned as head of the party “servant of the people”. The participants of the Kiev party Congress upheld the decision of the policy. Will replace him as Chairman of the former head of the election headquarters Alexander Kornienko. Earlier Razumkov said the head of political power should be a person with plenty of free time, and the Chairman of the Parliament there is no such resource.

The powers of the head of the party “Servant of the people” resigned speaker of the Verkhovna Rada Dmitry Razumkov. As reported “Interfax-Ukraine”, the policy decision about the resignation from the position of the party supported members of Congress in Kyiv.

The only candidate for the post of head of the party is Alexander Kornienko – he now holds the position of first Deputy parliamentary faction and former head of the election headquarters of “public Servants”.

As stated earlier, the Chairman of the faction in Parliament, David Arakhamiya, in fact, it Kornienko engaged in the leadership of the party in the last three months.

Dmitry Razumkov back in early October, has stated that he plans to resign as head of the party. He said that the head of the “Servant” must be a person with plenty of free for the construction of a party time than is the Chairman of the Verkhovna Rada.

“The party is young, it is necessary to build a that requires a lot of time. We will prepare for the local elections, and to combine these two positions effectively,” said Razumkov.

In late August, the Razumkov appointed to the post of speaker. For his election voted by 282 deputies in the required 226.

During the speech of freshly baked speaker stated that the purpose of his future work is “economic growth from 5% to 7% next year.” In addition, it considers necessary the creation of “a reliable mechanism for Recalling an MP”. Razumkov sure that this measure will contribute to a more responsible approach parliamentarians to their work.

“He [the Razumkov] deserve this post. All the organizational work from the beginning [the presidential campaign] was on it”, – told RBC a source close to policy.

In addition, according to close to the election headquarters of the party sources, the candidacy of the Razumkov was a priority. They noted that he was the speaker of the two elections as the leader of the process of party building. However, as reported by the media, the colleague, the Ukrainian leader did not comment on the appeared information.

At the same time, the head of the election headquarters of the “Servants of the people” Alexander Kornienko said that the party has “a good principle not to make posts to win.” Thus he has noticed that during the cooperation, Razumkov never let the party members.

According to Kornienko, Razumkov according to the results of the presidential and parliamentary election campaigns can be described “only positive.”

“He was able to become a real team leader and will be able to organize the work of Parliament, if the deputies will trust him speakerstwo,” — said the head of staff.

At the extraordinary elections to the Verkhovna Rada, which took place on 21 July, Mr Razumkov headed the party list of “public Servants”.

Before last fall, he joined the “team se”, the head of the party was the head of the Ukrainian politicalcultural group. During the election campaign of the presidential elections Razumkov was the official speaker of a staff of Vladimir Zelensky and dealt with issues of domestic policy.

Zelensky sure that the new convocation of the Parliament, chaired by Razumkov will go down in history, but the question remains, what are some specific ways.

“God forbid, you will go down in history as the Parliament which lasted less than just one year. In fact, it is your, our probation” — drew the attention Zelensky at the first meeting of the new composition of the Verkhovna Rada. He also stressed that MPs should strengthen the defense of Ukraine, to do everything to end the war in the South-Eastern part of the country. In addition, according to the head of state, before Parliament is the task of the “return of Crimea”.

He added that elected representatives should constructively every day and work hard “for the benefit of the Ukrainian people.” The Ukrainian President stressed that he now knows what to dissolve Parliament “not so bad”.

On July 21, Ukraine held early parliamentary elections. According to their results, won the presidential party “servant of the people”, voted for it of 43.16% of the voters. In conjunction with the results of the elections in constituencies that allowed her to take in Parliament, 254 and create a single-party majority.

A "gift" for Christmas: an Aston Martin began delivery of ultragroove retroscope

Chechnya is not Afghanistan: Kadyrov condemned the United States for the war and sanctions