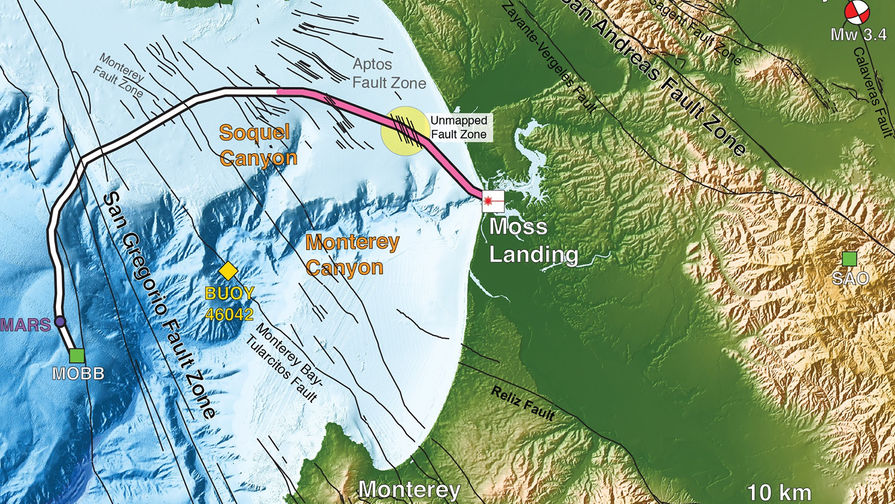 Scientists figured out how to use fiber optic cables for exploring fractures in the ocean. With their help, geophysicists were the first to register the earthquake and open a new area of the fault, near California.

Fiber optic cables, which have long been stretched on the land and on the ocean floor, will soon help scientists to explore the geological structures on the seabed and to more accurately predict earthquakes.
On the first such experience was told by scientists from the University of Berkeley in California published an article in the prestigious scientific journal Science.

In it they told about the experiment, during which they managed to use twenty kilometers of the cable as the equivalent of ten thousand seismic sensors on the ocean floor. This experiment was conducted in Monterey Bay on the Central coast of California, for four days scientists

even recorded the earthquake of a magnitude of 3.5, which was the zone of deep faults.

A new technique, previously tested previously on land, can give scientists the data to predict earthquakes in the ocean, where at the moment there are very few seismic stations, of which 70% of the planet’s surface remains not covered by the seismic sensors.

“There is a huge need in seismology on the ocean floor. Any tools that you immerse into the ocean, even if it is only fifty miles from shore, will be very useful,” — said Nate Lindsay, the author of the study.

In their experiment, the researchers used a 20-km stretch of fiber optic cable laid along the bottom of the Bay 17 years ago to the seismic station at the bottom – then it was the first earthquake in history, placed at the bottom of the Pacific ocean. However, experience was not used by the sensor, and the optical cable. Scientists have connected to a device that sends short laser pulses, and began to catch back-scattered surface optovaya photons, which gives an indication of the cable tension at different points.

The magnitude of the scattering was measured every two meters, which turned a 20-kilometer-long cable chain of 10 thousand seismic sensors.

“Such systems are sensitive to fluctuations in the order of nanometers to hundreds of PM, for each meter length. This corresponds to a change in the level of one billionth,” write the authors.

Earlier this year scientists reported the results of a similar six-month experiment, which used a 22-kilometer stretch of cable in the Sacramento area. This method then allowed the scientists to track seismic activity of the territory, industrial noise with a higher accuracy than it can make traditional seismic stations.

“The beauty of fibre optic seismology is that you can use telecommunication cables instead of posting thousands of seismometers, explained Lindsay. – You just take a cable and connect the device to the end”.

During the underwater experiment, the scientists were able to capture the various echoes of the earthquake that struck 45 kilometers on land and discover the underwater fault zone, which was not previously known.

In October, scientists reported that in southern California for the first time in 500 years, began to move the rift in the earth’s crust called Garlok capable of causing an earthquake of magnitude 8 points, found by researchers from the California Institute of Technology. Dedicated to this article was published in the journal Science. The movement of the tectonic fault contributed to the series of earthquakes in the U.S. city of Ridgecrest in July 2019, when two large aftershocks of 6.4 and 7.1 points followed by about a thousand less strong.

The Garlok fault length of about 250 km is located in the South-Western States of the USA. He comes from the North-East to South-West along the Northern border of Mokhovskogo tectonic block and the southern spurs of the Sierra Nevada, crosses the fault the San Andreas fault in the area of Antelope valley. The rift formed as a result of changing the direction of movement of the Pacific plate parallel to the coast on a parallel fault to the San Andreas. Seismic activity there is usually low, earthquakes (up to 5.7) is usually caused by earthquakes on other faults.

Until last summer this year Garlok almost did not move for five hundred years. His hand went high into centimeter per year. But after a series of earthquakes sides of the fault shifted 2 cm in the vertical.

Now earthquake prediction in this area is almost impossible, because of the movement of the earth’s crust here has not been investigated, and, therefore, unpredictable.