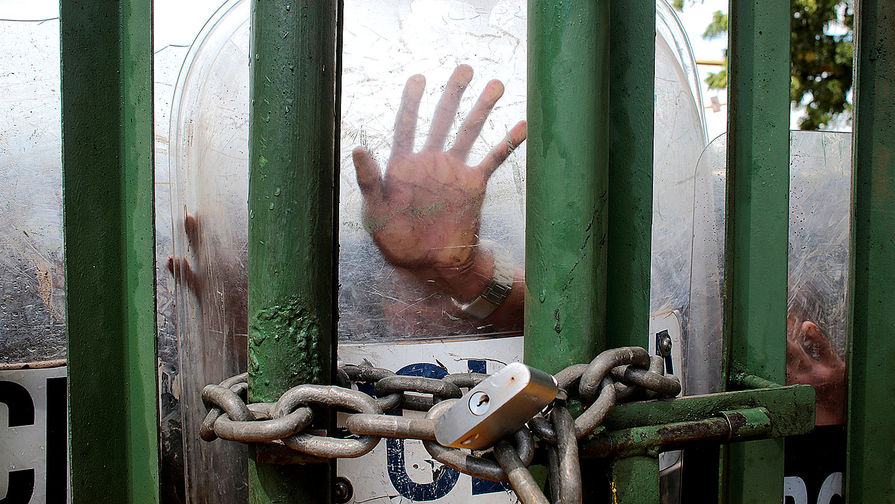 Washington has long been sharpening his teeth on the President of Nicaragua Daniel Ortega, fought with him the administration of Ronald Reagan. Now, however, Ortega repression against the opposition cause more outrage, and the growing chance that the US plan will work and the head of Nicaragua will repeat the fate of the recently departed under pressure from his political opponents of President of Bolivia, Evo Morales.

This week, the President of the United States Donald trump extended the sanctions regime in Nicaragua. As noted in a communiqué published on the website of the White house, what is happening in this country “is a threat to national security and foreign policy of the USA”.

The regime of President Daniel Ortega “systematically undermines democratic institutions”, and also contributing to “destabilization of the economy of Nicaragua”, stated in the Washington even a year ago. These same words are repeated in the new report, dated 25 Nov.

His decree trump extended the state of emergency measures against Nicaragua for another year. They include, in particular, the blocking of the property and foreign accounts of the authorities of the country. However, the most effective measures are contained in the recommendations of the world Bank to block the loans, financial and technical assistance to Nicaragua.

At first glance, a small country in Latin America, located many kilometers away from the United States, is unlikely to pose a threat to their national security. However, the White house has long expressed dissatisfaction with the political regime in this country, and it significantly increased after the events in neighboring Bolivia.

In early November in Bolivia under pressure from the opposition was ousted the objectionable White house President Evo Morales. The reason was the irrepressible thirst for power: despite the fact that at the helm of the country, Morales was 14 years old, in October, the fourth time he became President, although earlier the people in a referendum voted against it. The last election has caused outrage throughout the region, and the Organization of American States has recorded numerous violations during the voting.

Commenting on the resignation of Morales in mid-November, trump has made it clear that these events send a “strong signal of the illegitimate regimes in Venezuela and Nicaragua that democracy and the will of the people will always prevail.”

Trump statements performed in line with the rhetoric of his former adviser John Bolton, who shortly before leaving office named Venezuela, Cuba and Nicaragua “Troika tyranny.”

Washington’s desire to put pressure on President Ortega is quite understandable. One of the leaders of the struggle against the “contras”, which was actively supported by the administration of Ronald Reagan, never was a special place of Washington.

However, while he adhered to the democratic principles the US was forced to accept its existence.

At the same time, many problems of the Board of Ortega, the regime which in recent years has caused mass protests provoked by domestic circumstances. Partly progressive and respectable politicians in the region of Morales and Ortega brings one quality — the desire by all means to stay in power.

Daniel Saavedra Ortega, whose name in the 1980s, it was known to almost every Soviet schoolboy, — “ardent revolutionary”. He has been in power for over 40 years, albeit with interruptions. Ortega took an active part in the overthrow of the troops of the Sandinista front of national liberation (sfno) regime of the dictator Anastasio Somoza of Debila.

After the fall of Somoza on 19 July 1979, the former field commander was headed by an interim administration. In 1984, General elections were held. The President was Ortega, who received 67% of the votes. After some time the presidency was won by the liberal opposition leader Violetta Chamorro.

Ortega — master of political transactions. In 1996 and 2000, he failed in the electoral area. For the satisfaction of their own ambitions, he signed with a competitor, changer Chamorro, a right-wing President Arnoldo alemán deal. She was electoral reform: dropped strap for the election of a President from 50% to 40% or 35%, provided that the leader of the race ahead of main rival by 10%. As subsequent events showed, it was by the hand of Ortega.

In the elections of 5 November 2006, he achieved success, gaining of 38.07%. So Ortega after 16 years, returned to the chair of the head of state and since not released from the hands of the reins.

Lust for power has forced Ortega to seek new opportunities to remain at the helm. On the outskirts of the next election campaign he planned to run for a new term. The basic law of 1987 prohibits the President to run again.

In 2011 this opportunity was provided to the Supreme court, which was under the control of the President. Later, in accordance with the constitutional reform of 2014, Ortega was given the right to run an unlimited number of times. In addition, it was envisaged that to win enough to have a simple majority. So started his indefinite rule.

Five years later, the leader ran for a third term. Then Ortega made a controversial maneuver. Vice-President he appointed his wife, Rosario Murillo, arguing that the decision by the necessity of its promotion to a responsible position. On the eve of parliamentary battles have formed the coalition “Alliance United, Nicaragua wins,” which includes smaller parties and its supporting policies.

Two opposition groups — the Independent liberal party and the Liberal party constitucionalista — failed to put a single applicant after the decisions of the Supreme court, who withdrew from the race a prominent politician Eduardo Montealegre.

Under these circumstances, the opponents of Ortega have dubbed the upcoming election a “farce” and called for a boycott of them.

Steady state local and foreign analysts called differently. Ex-candidate for the top post Edmundo jarquin used to characterize the power Ortega the term “institutional dictatorship” and argued that “the persistent narrowing of the democratic space.

Professor, University of Salamanca, Salvador, Marty, resorting to the term “delegating” claimed that by using this model, “neutralizes the ability of citizens to serve as a counterweight to Executive power.”

American political scientist Richard Feinberg, who called the system in Nicaragua the concept of “soft authoritarianism” after the nomination of the wife of Ortega, the Vice-President called the regime “dynastic”.

Now the opposition demands resignation of “dynasty” and hold early elections under the supervision of foreign observers. All of these items supports the Organization of American States: in its recent report States that Ortega had made “democracy is impossible”.

“The Commission understands that the mechanisms of control and subordination that the government of Nicaragua is developing in relation to other branches of government, including the judiciary, the legislature, the Supreme electoral Council and other, make it impossible for the functioning of the democratic system in the country”, — stated in the report on the situation in Nicaragua, published 19 Nov.

Meanwhile, protests continued in the country, and in mid-November, a few people even went on a hunger strike in the Cathedral of Managua, demanding to stop repressions and release political prisoners. She was able to complete only after the intervention of the UN, which called on the President of Nicaragua to fulfil these requirements.

The authorities have not yet gone to the release of prisoners, despite the opinion of the Church, which has a great reputation in the society. The prisoners themselves in the appeal urged supporters to “not stop fighting”.

According to human rights activists, repressive policy of the authorities of Nicaragua have already led to the death of 325 people during clashes with authorities in 2018. According to their estimates, the country also left 70 thousand people.

However, despite the criticism of Ortega and his reign, the administration trump is unlikely to take any violent action against his regime. The current head of the White house is not a big supporter of “regime change”. Rather, Washington will intensify the economic pressure against Nicaragua and to wait, when the country was ripe internal conditions for change, as happened in Bolivia.