The report of the research division of the crypto currency exchange BtMEX they say, that the synchronization of nodes (nod) bitcoin would have been impossible without periodic improvements in BTC.

The authors of the study analyzed the efficiency of the software Bitcoin Core for 2012-2019 years. It was found that without a systematic technology upgrades it would be impossible to sync a bitcoin node.

In the end, the update brings the date of the decision of problems of scale BTC. The researchers note that the highest sync speed of the nodes in the bitcoin ecosystem is observed when using Bitcoin Core version 0.12.0.

When testing older versions had problems. Experts have tried to synchronize the nodes using the machine, consisting of 8 Intel 9 memory up to 64 GB. However, even such powerful equipment was unable to provide data synchronization.

At the moment the size of the blockchain of bitcoin is 293,37 GB, the average volume of one unit does not exceed 1 MB. For this service, Bitnodes, there are more than 9500 available nodes in the BTC ecosystem.

The latest version of Bitcoin Core 0.19.0.1 compatible with the Protocol SegWit and increases the capacity of the network of bitcoin with Bech32. 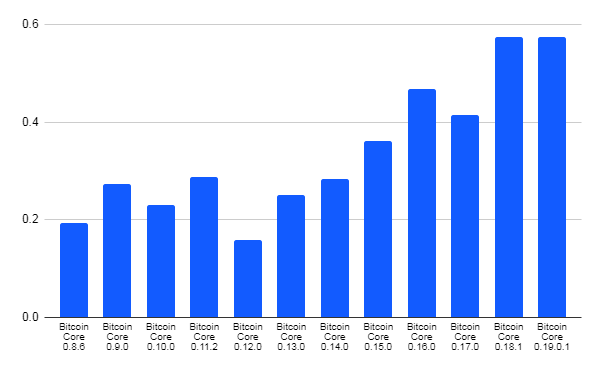