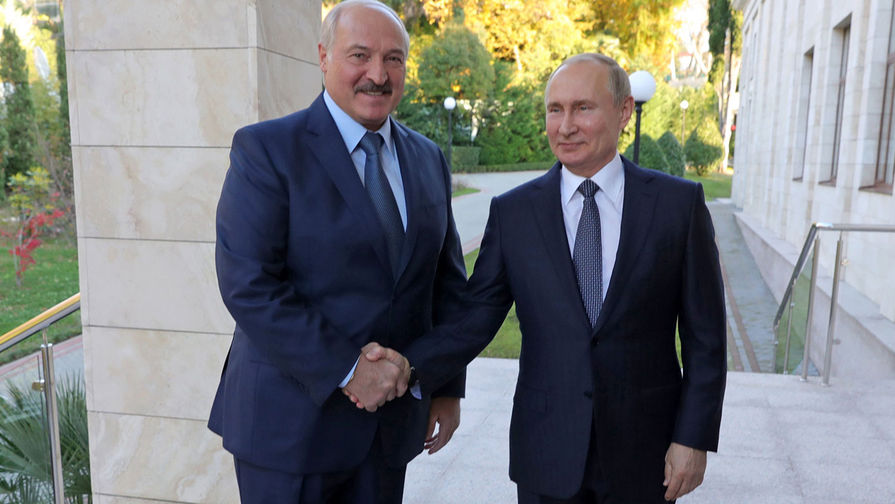 The talks between Vladimir Putin and Alexander Lukashenko were on the eve of important dates — December 8, will mark the 20th anniversary of the signing of the Treaty establishing the Union state. The parties discussed what still needed to be done in the framework of the Union of the document and discussed the price of oil and gas. Negotiations of presidents of Russia and Belarus lasted more than 5 hours.

The President of Russia Vladimir Putin met with his Belarusian counterpart Alexander Lukashenko in Sochi. The talks were held ahead of an important date — Sunday, December 8, will mark the 20th anniversary of the signing of the Treaty establishing the Union state (SG).

Putin at the talks said that the representatives of the Russian Federation and Belarus have done a great job analyzing what was done during the existence of the SG.

“Tomorrow marks 20 years since the Union Treaty, our colleagues, our governmental bodies, Ministers, the Prime Minister spent quite a lot of work on the analysis of what has been done in the framework of the signed earlier agreement on the Union state”, — quotes its words of RIA “news”.

According to the head of Russia, the parties discussed what should be done in the framework document that could be updated in relation to changing circumstances, including relations with other colleagues in the framework of the EAEU.

Not without incident — after the introductory remarks of the two leaders suddenly the lights went out. “Ended [electricity]”, — Putin joked. Lukashenko responded with humor: “It’s [the press Secretary of the President of Russia] Dima Peskov, I know.”

The 20th anniversary of the conclusion of the contract was expected to sign the plan of deepening bilateral integration — but despite the fact that active negotiations continued throughout the fall, consent yet, not manifested everywhere.

Lukashenko said that he learned that writing about it in Russia before heading to Sochi: “Now watching Russian TV, read a Telegram-channels, as is now fashionable. Everyone is wondering: Lukashenko what is going, why is he here at all?”

The leaders started the meeting at 15.25. After opening remarks, the talks continued in closed from the press. As informs RIA “news” Putin invited the participants of the talks on the gala dinner. After negotiations the Russian President held Lukashenko at the porch of the residence, they embraced, and then the Belarusian leader left.

One of the stumbling blocks remain in doubt of Minsk about how the Treaty might affect the country’s sovereignty. On this rests the rhetoric of the Belarusian President Alexander Lukashenko, who has repeatedly reminded the Belarusian independence.

“We have never intended and do not intend to be a part of any state, even the brotherly Russia”, — he said.

On 5 December, the President held a meeting with the Belarusian Parliament, which, on the one hand, declared that the “neighborhood” of Russia and Belarus time-tested, on the other — has criticized the bilateral negotiations. In particular, he was dissatisfied with the negotiations on natural gas deliveries, and that is still not resolved the issue of the April incident with the “dirty” oil.

“We are ready and $200 to buy gas and oil to buy at $63 per barrel. Importantly, to equal conditions. If our businesses are bought for $200, and then a competing company must have the same price,” — said the Belarusian leader. Otherwise, said the head of Belarus, will not be able to create a basis of relations within the Union state.

Lukashenko has said that Belarus needs the Russian loan and “get out without them” probably referring to the autumn statement that Minsk refused to “political loans” of $600 million.

In addition, the Belarusian President on the eve of his trip to Sochi reiterated its main demand for future contracts with Russia: according to him, all the possible documents should not contradict Belarusian independence and sovereignty.

“Remember! I’m not a kid who worked for 3-4-5 years President. I had enough — so. And I don’t want to undo all that I did along with you, the people created a sovereign independent state, so that it now lay in a box with a cross on top, and somewhere to throw away or to someone?” — quoted Lukashenko “bi-Bi-si”.

The prologue to the conversation between Putin and Lukashenko were other Russian-Belarusian talks at the highest level. On Friday in Sochi met the Prime Ministers of two countries — Dmitry Medvedev and Sergei Rumas.

The main topic for the discussion of the roadmap for integration of the two States. Also during the meeting, Medvedev denied previously said Lukashenka’s words about the “anti-elements” in the entourage of Vladimir Putin and expressed hope that the meeting of the two presidents “a lot”.

This is not the first talks between Medvedev and Rumata for the last time — the last time saw the premiere on November 19. The meeting proved to be substantial conversation, as reported by RIA “Novosti”, lasted more than seven hours, part of it was entirely closed to the press. However, at the end of the meeting the premiers came out with encouraging speeches, Medvedev spoke of “interpretation” and “approaching every day positions,” his Belarusian colleague also hinted at the progress of the integration. As of November, according to Rumas, it was agreed to order 20 “road maps” of the 31 that were scheduled in early September.

Ahead of the meeting on 6 December the Belarusian Premier made another important statement about the future of integration. Sergei Rumas said that the discussed the roadmap related to purely economic issues, not assuming any political reforms and creating new supranational bodies. The same was said by Alexander Lukashenko.