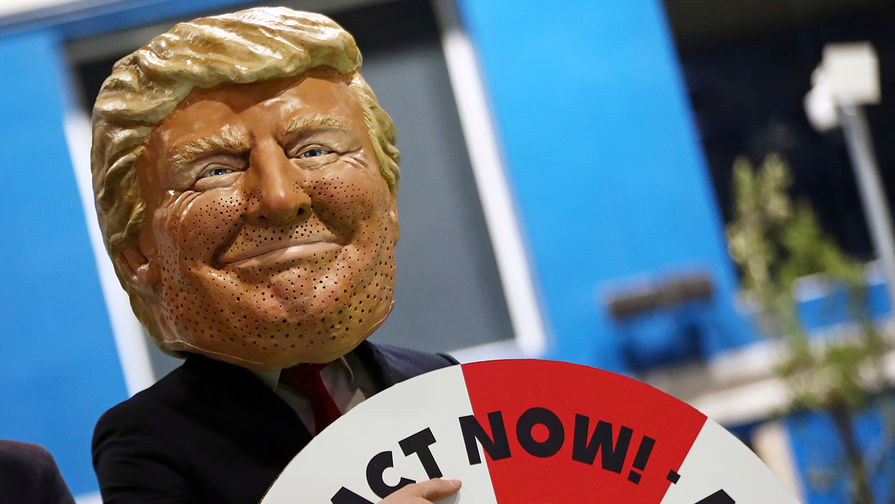 In the US the Democrats of the house of representatives unveiled a draft conclusion within the framework of the impeachment of Donald trump. The President is accused under two articles — about the abuse of power and obstructing the work of the legislators. Before the end of this year, trump could become the third head of the White house, which has undergone a procedure of impeachment. The charges were filed before the meeting of the American leader with the foreign Minister of Russia Sergey Lavrov.

Democrats in the U.S. house of representatives introduced a draft formal charges against the President of Donald trump on two counts: the use of official position for personal gain or to obstruct the work of Congress.

“We must be clear: nobody, not even the President, are not above the law”, — said the head of the legal Committee of Jerrold Nadler, in announcing the charges.

The tramp found the accusations “ridiculous”. “Nadler just said that I “put pressure on Ukraine to interfere in our elections in 2020.” [It is] ridiculous, and he knows that’s not true. The President and the Minister of foreign Affairs of Ukraine have repeatedly stated that “no pressure existed”. Nadler and the Democrats know it, but refuse to admit it,” tweeted the President of the United States

The fact that the opponents of U.S. President Donald trump in the Democratic party will try to delay the impeachment, it was clear to all. However, the speed at which it moves, is still impressive.

“Regret but also with confidence and humility, with a sense of loyalty to our founders and a heart full of love for America today, I am asking the chairmen of our committees to begin work on the charges,” — said on December 5, the house of representatives speaker Nancy Pelosi during a press conference.

The head of the legal Committee of Jerrold Nadler stated that interviews witnesses, legislators are planning in a few weeks and for Christmas to press charges. However, Committee members had less than a week to complete the procedure.

Yesterday’s final session lasted about nine hours. It is noteworthy that during Committee hearings is the right to call witnesses was the Republicans. The meeting was able to attend and trump, and members of his legal team. They had the right to conduct its own defense, to ask questions of the witnesses and their opponents to bring their own.

But the Democrats did not allow the supporters of the trump to call his witnesses. The meeting heard the testimony of the lawyers of the intelligence Committee, who published a 300-page investigation report against the President.

The beginning of a possible impeachment of the us President put his communication with the President of Ukraine Vladimir Zelensky.

According to the prosecution, the American leader demanded Zelensky to bring the matter Burisma, which featured hunter Biden — the son of former Vice-President of the USA Joe Biden, who intends to participate in the elections of 2020 Democrats. Trump opponents believe that the White house pressured Zelensky, the actions of the Ukrainian side allegedly depended on the provision of military assistance to Kiev in the amount of $391 million and the meeting of the two leaders.

“For the President is irreparable crime that he uses the powers of his administration to receive an improper personal gain, ignoring or damaging national interests. This is what made a President trump, when asked Ukraine to interfere in our presidential election of 2020, to the detriment of our national security, undermining the integrity of the next election and breaking his oath to the American people”, — said today Jerrold Nadler.

In addition, according to the prosecution, trump tried to hinder the investigation, to conceal violations of the law. Charged with obstruction of justice due to the refusal by many White house staff to testify on the case concerning the impeachment.

Democrats believe that the President started the pressure on Kiev in the spring. Responsible for communication with the Ukrainian government became a lawyer trump Rudolph Giuliani, according to the prosecution, the campaign was also attended by a member of the intelligence Committee of the house of representatives Devin Nunes, an employee of the national security Council Kas Patel, American businessmen of Ukrainian origin Leo Parnassus, Igor Fruman and Dmitry Firtash, ex-Prosecutor General of Ukraine Yuriy Lutsenko and Viktor Shokin, former members of the legal team trump Joe Digenova and Victoria Tonsing and even the journalist of the Hill John Solomon, who wrote about corruption in Kiev.

According to the Democrats, Joe Digenova and Victoria Tonsing has entered into agreements with Yury Lutsenko and Victor Shokin.

The dismissal of the latter, incidentally, contributed himself, Joe Biden, he was nominated Petro Poroshenko, at that time held the post of President of Ukraine, the requirement to send Shokin resign. Otherwise Biden Sr. promised that Kiev will not receive credit for $1 billion.

“I went to the press conference and said we don’t give you a billion dollars. They tell me: you do not have such authority, you — not the President, the President said that he would give. I said, “call him.” I said that you don’t get a billion dollars. I said I was leaving in 6 hours, and if your attorney General will not be dismissed until you get the money. And that son of a bitch was fired. And in his place put someone in the time trusted” — said Joe Biden during a speech at the Council on foreign relations of the United States in 2018.

In indictments allegations of Democrats also said that Donald trump should be removed not only from office of the President, but to deny the right to hold “any office of honor, trust or profit under the United States.”

Although in the text there is no mention of the investigation of former spectacular Robert Mueller, who tried to prove Russia’s intervention in the elections of 2016, the paper reported that the President’s actions in Ukraine with “previous invitation to foreign interference in elections in the United States.”

In the transcript of the telephone conversation issued by the White house to show that there is no basis for the allegations, trump really Zelensky asks to examine the situation with Biden, however, according to the President, it is not a fact pressure.

Protection of the American leader insists that military assistance to Ukraine were eventually unlocked, and Vladimir Zelensky denies pressure on him from the head of the White house.

“I had no pressure, and no pre-conditions put forward were not” — said the Ukrainian leader in an interview to the Japanese Agency Kyodo.

However, before the impeachment trump is still far away, despite the relatively rapid progress in the investigation. Thursday, December 12, the judicial Committee shall vote on each article of charges. For confirmation of the charges, you need the consent of a simple majority. It is expected that against the President will serve 24 people, against 17.

If the allegations are confirmed, to vote in full strength will be the whole house of representatives controlled by the Democrats. Accordingly, at this stage, trump is likely facing defeat. Given the intentions of the opponents of the President, this may occur before 20 December, when Congress will begin the Christmas holidays.

So by the end of next week trump could become the third President in U.S. history, which will be subjected to impeachment proceedings. To him procedure touched Andrew Johnson in 1868 and bill Clinton in 1999.

And finally, the American leader will appear before the Senate, where procedure will take place in the format of a full trial. If it comes to that, the trial is likely to take place in early 2020.

To trump’s resignation will require a two-thirds majority of the votes. Here, however, it is worth considering that the Senate is controlled by Republicans (53 seats out of 100).

However, opponents of the White house, knowing full well the chances of impeachment, can pursue a different goal, investigating possible pressure on trump Zelensky. On the eve of the presidential elections impeachment becomes a campaign tool, designed to discredit trump in the eyes of voters.

By the way, like the rush on the part of the democratic party in Washington associated with today’s meeting of the US President with the foreign Minister of Russia Sergey Lavrov.

Any connection of the White house with Moscow to cause the Democrats the voltage. However, do the Democrats explain such haste differently.

“Why not just let him deceive us again? Why not let him get foreign aid again? That is our argument,” — said today the Chairman of the intelligence Committee of the U.S. house of representatives Adam Schiff on the question of why the Democrats do not have to wait with the accusations.