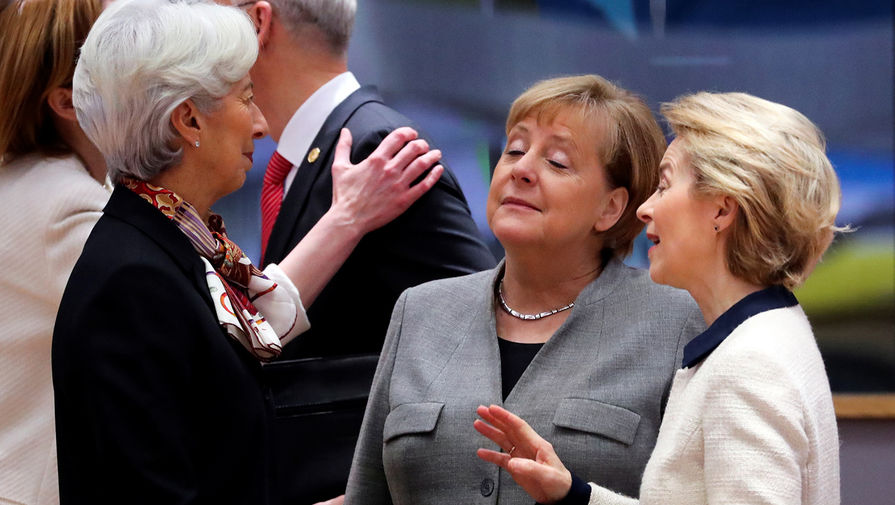 The EU summit ended with the extension of the EU sanctions against Russia. German Chancellor Angela Merkel explained the next wave of restrictive measures low progress on conflict settlement in the Donbass. In the other questions the unity of the EU was absent, and the most heated debate has caused climate policy.

In Brussels ended a two-day summit of member countries of the European Union, the two leaders discussed several key issues on the agenda. In particular, the parties adopted decisions on Brexit, climate policy and the sanctions against Russia.

The output of London — the victory of Johnson

EU leaders at the summit instructed the Commission to submit a mandate for negotiation with the UK on future relations between Brussels and London after Brexit.

As stated by the head of the European Council Charles Michel, EU ready to start negotiations with London on further cooperation of the parties.

“We decided to start a second round of talks with London immediately after the ratification of the agreement outlet [Britain] from the EU to the British Parliament, which now, after the election, which must occur in the shortest possible time,” said Michel in a press conference following the summit.

According to preliminary election results, the Conservative party under the leadership of Prime Minister Boris Johnson won an absolute majority in Parliament — more than 360 of 650 seats. The Prime Minister has assured residents in the UK intention to hold a Brexit by 31 January 2020.

Michelle, speaking at a press conference after the EU summit, congratulated Johnson on the win and called on the Prime Minister as soon as possible to proceed to the ratification of the agreement on the conditions of interaction of London and Brussels after Brexit.

The future relations of the UK and EU will be focused on building a closer partnership, said the head of the European Council, they will be built on the principle of transparency that exists between EU countries.

Sanctions against Russia — has almost traditionally become one of the main issues of the EU summit, in the discussions, the EU leaders unanimously supported the regular renewal of restrictive measures.

German Chancellor Angela Merkel, speaking at a press conference at the summit, said that while the European Union sees no grounds for cancellation of restrictive measures.

“I and the President [of France] Emmanuel macron yesterday informed of the results of the meeting in “Norman format”. We said that there is a certain progress, but not enough to say that we can lift the sanctions”, — added the Chancellor.

It is worth noting that the summit “channel four” — Russia, Ukraine, Germany and France was held in Paris on 9 December. The leaders of these countries discussed the situation around the conflict in the Donbass, the main outcome of the meeting was the agreement on the exchange of prisoners and the call for a comprehensive ceasefire.

In Moscow, after the new extension of European sanctions, pointed to the systematic nature of the actions of the European Union. According to Deputy foreign Minister Alexander Grushko, Brussels extends anti-Russian sanctions every six months.

“We are the other, frankly, did not expect. [They] continue to damage their own economy”, — said Grushko.

As stated in conversation with “Газетой.Ru” the Director of the Center European information Nikolai Topornin, the unity of the EU on the issue of sanctions cannot be considered absolute.

“Italy, Hungary, Austria and several other States have been arguing about the futility of sanctions against Russia, as the restrictive measures are no good. These countries called for their modification or revision to the sanctions began to fulfill its goal,” — said the expert.

However, not all decisions at the EU summit were adopted unanimously, in particular, controversy arose when discussing climate policy. The so-called “green strategy” has become a kind of stumbling block for EU leaders.

The document envisages the achievement of the 2050 climate neutrality by all European Union countries, we are talking about a significant reduction in emissions of gases that cause the greenhouse effect, and increasing their absorption.

Complete uniformity in this matter could not be reached — it was opposed by Poland. As stated by Polish Prime Minister Mateusz Morawiecki, the country will move at their own pace towards climate neutrality.

“It was a very difficult negotiation. In the outcome document for our country have made an exception, which will be enshrined in the legislative process”, — said the Prime Minister.

About 80% of electricity in Poland is produced by coal-fired plants, Reuters writes, but Warsaw is not ready to rebuild its energy, neither on the atomic nor on the gas.

Most of Poland is concerned about the financing of Brussels for the implementation of the relevant provisions. Moravicki stressed that the country is among the regions the gradual reduction of use of fossil fuels “hit the hardest”.

A kind of protest of Poland supported Hungary, urging the EU to give more substantial guarantees from the less wealthy countries of the Union. According to Hungarian Prime Minister Viktor Orban, the poor are not obliged “to pay for the fight against global warming.”

Hungary also opposed the rejection of nuclear power, did not support the assertion that a nuclear power plant “smoke the sky”. This issue the EU has not managed to agree, in the absence of consensus it was moved to the next summit.

In addition, the “green strategy” will require more than €260 billion by 2030, and this should be considered. While spending on climate policy is not satisfied, a number of States, particularly the Czech Republic and Romania. The implementation of the agreement each year will take away from their budgets by €4 billion and €8 billion respectively.

“France and Germany are the main sponsors of climate initiatives will put pressure on countries that refuse to a sharp reduction in emissions of different gases. This is a complex issue, it will require a number of separate agreements, as many countries are not yet ready to comply with the agreement. Probably, the parties will try to come to some compromise,” — said Topornin.

Additionally, the question remains the plan for the reform of the European stability mechanism (ESM). The so-called stabilization Fund of the Euro area designed for the protection of the EU financial system to various shocks such as the global financial crisis of 2008 or the Euro crisis 2010-2014.

The reform debate has been postponed until 2020, EU leaders have mandated the Eurogroup to continue working on the initiative.

“To continue work on the whole reform package ESM, while continuing domestic legal procedures and also over all the elements of the deepening of the Banking Union”, — stated in the final statement.

Eurogroup proposes the stabilization Fund to protect the systemically important European banks from bankruptcy. Their stability has a Single restructuring mechanism (SRM), but its funds are not always enough to protect. Therefore, in cases of emergency Eurogroup calls for the use of ESM funds.

This system causes a lot of complaints in EU countries, on the one hand politicians fear loss of control over the banking sphere of its States, and on the other don’t want to waste the taxpayers ‘ money of one country for another reorganization of the Bank.

This question is also linked to the budget plan of the Eurozone, according to which the parties agreed to continue negotiations. Funding should amount to around €1.08 trillion from 2021 to 2027, which creates a number of problems for the EU, as the UK intends to withdraw from the Association, and with it will go and its contribution to the budget.

According to preliminary data, due to the release of London from the EU, the budget of the Association will annually lose around €13 billion the moment can lead to greater contributions from countries that worried about the state of the European Union.

The question of Finance will be closed for a few years with the help of the UK, I’m sure Topornin, London have to pay €45 and 46 billion after Brexit.

“It is their duty for various programs and projects. The amount will be paid uniform portions. In the short term, these funds will close the hole in the EU budget. Then it will naturally affect the financing of enterprises”, — the expert believes.

The illusion of unity

The results of the EU summit demonstrated the unity of the leaders of the member States only in matters related to Russia and Brexit. In other moments there is a certain division between Eastern and Western Europe.

The basic contradictions of the parties are often associated with financial matters, the economy in Western European countries allows them to impose restrictions for the same climate policy, but budgets East suffer from these measures. For example, in Germany, the budget for 2020 is €362 billion in Poland this amount is less than €100 billion.

Disagreements will eliminate the economic modernization of Eastern Europe to the level of Western, says Topornin, but this process may take several decades.

“Western countries are at a higher level of development, it is easier to take action on climate change, to abandon coal and so on. In Eastern Europe, this all costs a lot of money for developing countries will need much time”, — concluded the expert.