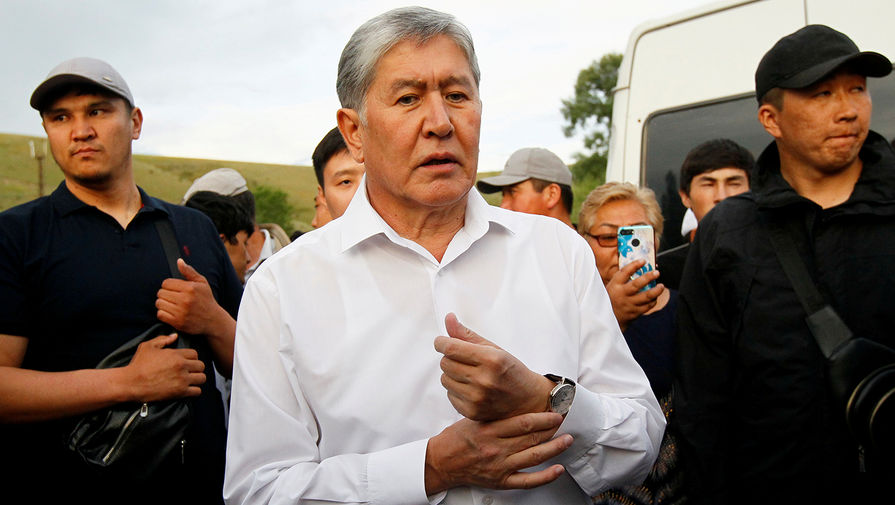 Former President of Kyrgyzstan Almazbek Atambayev formally notified on suspicion in murder of the chief of special forces during the storming of the house of the former leader. The investigation claims that the operative was shot from a sniper rifle, decorated Atambaev. The politician is involved in 14 criminal cases. Next year Kyrgyzstan will hold parliamentary elections, in which ex-President is a threat to his successor, even while under arrest.

The ex-President of Kyrgyzstan Almazbek Atambayev accused of killing the chief of special forces. This was announced by the interior Minister of the state of Kashkar djunushaliev. According to him, the policy is formally charged.

As stated earlier the lawyer Atambayev, the former President is involved in at least 14 criminal cases.

He is accused of organizing riots, threats to government officials, arms trafficking, the obstruction of the investigation, hostage taking, attempted murder and of several counts of corruption.

On 13 December the state Commission for investigation of mass disorders in the village of Koi-Tash also said that Atambayev accused of preparing to seize power.

We are talking about the August events. The former President of Kyrgyzstan was arrested on 9 August. The operation on detention of the state began on 7 August and lasted two days — the politician had a serious resistance to law enforcement. On the first day the ex-President’s supporters blocked the special forces on the territory of his residence, and then and completely repulsed the attack, and even managed to take prisoners.

As a result of the operation killed the chief of special forces ussen Niyazbekov. According to the head of the Kyrgyz interior Ministry, it was made a shot from a sniper rifle, decorated Atambaev. Due to bullet wounds in the chest, the chief of the special forces died.

In addition, the result of the assault, according to the interior Ministry, injured 136 people on both sides.

On the second day of the operation, the Deputy head of the Ministry of internal Affairs of Kyrgyzstan Kursan Asanov held talks with the former President, which Atambayev and decided to surrender in return for a promise not to touch his supporters.

After the arrest, supporters of Atambaev held a rally against his detention in the Central square of Bishkek, which was attended by about thousand people.

The residence of the former President stormed to deliver him in for questioning as a witness in the case of corruption. To come in for questioning voluntarily Atambayev refused. Former leader of the country was suspected of facilitating the redevelopment of land, corruption in the reconstruction of the TPP capital, illegal export of coal to Bishkek TPP, the illegal obtaining of land for building houses, as well as aid in the release of criminal authority Aziz batukaeva.

Clouds over Atambayev continues to thicken today. After the storming of the list of cases against the state significantly increased. Almost all property policies and his family arrested. Now the ex-President is under arrest until December 26, he was been sent to the forensic-psychiatric examination.

“You have to understand that the state has a very strong position in Kyrgyzstan and substantial support. Man he’s sharp, and it is possible he could make enemies. I can’t say that it was a direct political order, but a certain kind of political component, but it can be not main, there are commercial interests,” — said in a conversation with “Газетой.Ru” Director of the Eurasian center Alexei Pilko.

Supporters of the policy, ensuring that everything instituted against him are politically motivated. In their opinion, the current government is thus trying to deprive the state of any opportunity to participate in the political life of the country.

An additional reason for these considerations was the seizure and the shutdown of opposition TV channel “April”, owned by the former President. The channel stopped broadcasting on 7 August, during the first attempt to storm the residence of the state and, nevertheless, continued to broadcast live operations in social networks.

Two days after the arrest of the former President, law enforcement officers broke into the premises of the TV company and demanded from journalists to vacate the building, which was subsequently sealed.

In the Department of information and mass communications under the Ministry of culture, information and tourism (MCAT) of Kyrgyzstan said that “the channel “April” seized as the property belonging to the person suspected of committing serious crimes.” However, the staff of the channel believe that the arrest was imposed to ensure that the network was not transferred to third parties. The lock broadcast journalists believe the attack on freedom of speech in the country.

Next year Kyrgyzstan will hold parliamentary elections. Now, on the background of the tense political situation, political analysts believe that the elections will be under fierce competition. And the main struggle is expected to unfold between the two camps of supporters of the current President Sooronbay Zheenbekov and come from the environment of the state.

Almazbek Atambayev was at the head of the state from 2011 to 2017. Previous parliamentary elections were held in 2015, according to the results the highest number of votes won by the Social democratic party (SDPK) Atambayev. Thus, in the Parliament of the country is largely dominated by supporters of the policy.

The President of Kyrgyzstan is elected for one term only. Realizing this, the environment policy in Parliament beforehand preoccupied about his future. Realizing that with the change of the head of state, will weaken their influence, he Atambayev and his supporters decided to strengthen its representation in Parliament by forming a coalition majority.

And if he Atambayev has already left his post, the people around him still remained in power, despite persecutions on the part of the successor of the former President.

Atambayev became the first President in the history of post-Soviet Kyrgyzstan, which handed over power peacefully. However, many believe that in the process of democratic change of government took place some of the agreements between him and his successor Sooronbai Jeenbekov.

“We were friends 24 years with Sooronbai Jeenbekov. I remember the Deputy Zheenbekov, who was Chairman of the kolkhoz. He says thanks to me in 2000 became the Vice-speaker. In 2007 he became a Minister in my government,” — said Atambayev in an interview with “April” in 2018.

The former President has provided significant support to his friend during the presidential election, which no doubt played a significant role in the victory Zheenbekov. Given such a close relationship, the support and the likely agreement between friends, we can assume that Atambayev expected to save a significant part of its influence and power in Kyrgyzstan provides access to resources and control over financial flows.

After winning Zheenbekov, Kyrgyzstan wondered what rewards there are for ex-President — the post of speaker of Parliament or the leader of the faction of the majority. Such expectations are not met.

Gradually began to face criminal prosecution, many supporters of the former President. Atambayev or persistently did not notice hints, or chose to ignore them. He made criticizing his successor, and openly declared that the success of Zheenbekov — is entirely to his credit.

“I would say that there are people who can even dozens of years, 20-25 years of hiding behind someone’s back, to enjoy the protection of this back, to achieve something at the expense of the back of the other, but there comes a point when he thinks the back-I don’t need anymore! And it is with great joy that sticks a knife in the back”, — said the former President in an interview.

In may, the President signed the law forbidding former presidents to take political, special public positions in the state authorities, the governing bodies of the political party or otherwise participate in the activities of a political party.

Atambayev had to leave the post of Chairman of the ruling Social democratic party and even to terminate their membership in it.

More alarming for him was the signing at roughly the same time act to bring former leaders to trial, after which the European Union and was charged with corruption.

Both the politicians and the experts characterize as strong and tough personalities. This is evidenced by the fact that during the assault the ex-President he fired at the commandos.

“My supporters did not have weapons, I personally shot during the attack,” he admitted to reporters. While Atambayev said that “trying to get” people.

Jeenbekov also — quite independent figure, he apparently did not want to stay long depending on someone else.

It is also worth considering that the confrontation of the two men goes beyond their personal mutual hostility and struggle for influence. The Kyrgyz society since ancient times divided on the principle North — South. Political elites in the country are these two sides.

Sooronbai Jeenbekov is the representative of the southern territories, where his support is high enough. Almazbek Atambayev, on the contrary, is among the Northern elite. About surviving the impact of the ex-President says at least the number and tenacity of his supporters during the storming of his residence.

But, more significantly is the presence of Atambayev’s supporters in Parliament. Accordingly, even while under arrest, the ex-President is a threat to the influence of Zheenbekov.