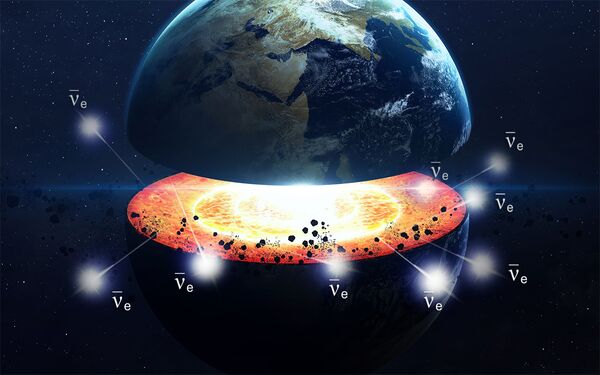 Tatiana Pichugina. In the world building two detectors, able to register geoneutrino — particles generated by radioactive decay within the Earth. This will help to understand the mechanism of formation of deep heat, and in the future — to predict natural disasters. Perhaps the “terrestrial” neutrino will clarify the question of how it was formed our planet.

Neutrinos and antineutrinos are elementary particles, long considered elusive. They are formed during beta decay, one of the types of nuclear fission. On Earth they are produced in nuclear reactors.

Natural neutrinos coming from the Sun as a result of a self-sustaining fusion reactions. They are born in the atmosphere by cosmic rays. In space worn relic neutrinos that emerged in the first moments of the Big Bang. And finally, the source of neutrinos serve as radioactive isotopes, scattered in the depths of the planet.

The idea of using antineutrinos to test geological hypotheses occurred to physicists in the 1960-ies. Registered them for the first time only in 2005 in underground detector the detector consists (Japan) as a side result of the study of solar neutrinos. In 2010, the existence of particles is reliably confirmed in the experiment Borexino in Italy.

Terrestrial antineutrinos will help to reveal the fundamental mysteries of science: how many radioactive elements in the earth and where they are localized, how much heat they generate, which models the structure and composition of the Earth are more consistent with observations.

However, this is not so simple: matter, by and large, transparent to neutrinos (which is reflected in the name of the particles). Particles do not participate in electromagnetic and strong interactions, gravity can barely feel it, respond only to the weak force acting on scales smaller than the diameter of a proton. Neutrinos can fly in space dozens of light-years, piercing the stars, gas clouds, planets, never faced with any other particle.

Time in the Borexino and the detector consists recorded signals from about 190 geoneutrino — decay products of uranium-238 and thorium-232. On the one hand, it’s proof that direct observation of terrestrial flux of neutrinos is possible, and preliminary data are in agreement with the generally accepted geological models; on the other — these statistics are insufficient to draw firm scientific conclusions. Its collection in the existing experiments will take hundreds of years. 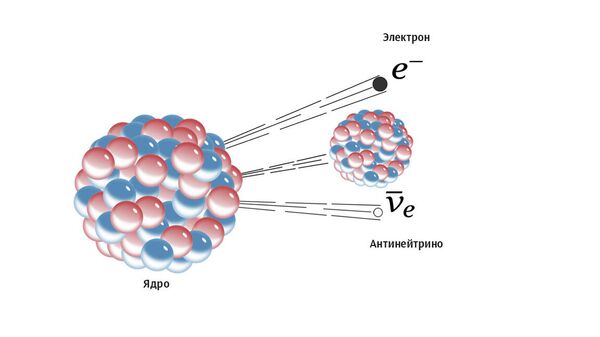 The detectors and the detector consists Borexino is a huge container filled with liquid hydrocarbons, acting as a scintillator. When interacting with the neutrinos they emit photons, which are registered by photomultipliers. Installation placed in the mines deep underground to reduce the impact of cosmic rays.

The construction of the detectors will operate on the same principles as the current one. To record more events, a lot of the scintillator greatly increase, the liquid is cleaned from radioactive impurities (carbon-14, radon), creating noise. In addition, it is important to place the detectors as far away from existing nuclear reactors.

One of the machines, SNO+, built in Sarbarish neutrino Observatory in Canada. It had already begun to fill with liquid scintillator. The world’s largest 20-kiloton detector designed in particular for the study of terrestrial neutrino — JUNO — building in southern China. It will start to collect statistics to 2021.

Discusses the creation of a large scintillation detector with a target mass ten kilotons in the Baksan neutrino Observatory INR RAS in the North Caucasus.

As write the authors, “the geographical features of the location of the Observatory significantly suppress the background associated with the fluxes of antineutrinos from reactors of nuclear power plants, and register the flows of anti-neutrino, which carry information about the structure of the crust in this region.” 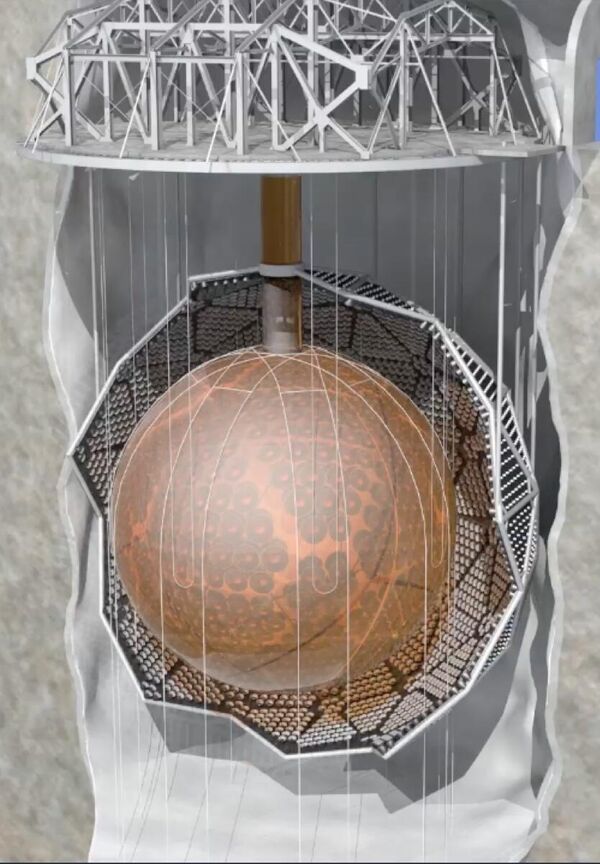 The natural radioactivity of the Earth answer 34 long-lived isotope, the greatest contribution of all three: uranium-238, thorium-232 and potassium-40. According to the generally accepted model of the Earth — silicate (Bulk Silicate Earth) — most of the radionuclides contained in the upper shell of the Earth — the lithosphere, is approximately two times less of them scattered in the mantle, the core is almost none.

This distribution of radionuclides resulted from the formation of the planet. Immediately after birth of the dense dust cloud, the Earth was a molten ball. This was facilitated by two conditions: a very high content of radionuclides (in particular, there was twice as much uranium-238, half-life equal to the time of existence of the Earth — 4.5 billion years) and the intense bombardment of meteorites.

As the cooling substance of the planet began to delaminate. Iron and Nickel sank to the inside forming the core, on top of accumulated silicate melt, which absorbed the incompatible trace elements, including potassium, thorium, uranium.

In beta decay, the energy carried by electrons is converted into heat and anti-neutrino carry away their part of the energy in the space. If you know their parameters, you can calculate the concentration of the parent radionuclides in the crust and mantle and clarify how much heat they generate. 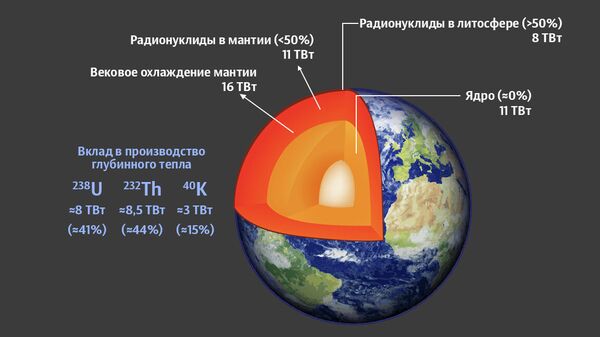 Current estimates of total heat flow of the Earth and of the share of each source vary widely depending on the method of calculation. On average, the contribution of radiogenic heat — about 20 percent. The rest falls on the secular cooling of the mantle (which was originally molten and then cools) and heat the planet’s core.

Due to internal heat sources is the mixing (convection) of the mantle plumes are formed and, as a consequence, the evident tectonic activity on the planet’s surface: movement of crustal plates, formation of major faults and mountain ranges, earthquakes, and volcanism.

Another fundamental task is to establish the ratio of isotopes of thorium and uranium. Analysis of chondrite meteorites and the comparison of samples taken in the earth’s crust, have allowed to calculate that thorium-232 is 3.9 times more than uranium-238. To understand the early evolution of the Earth, we need an accurate assessment, which can be obtained by studying geoneutrinos.

However, pre-calculated mass of thorium and uranium in the crust and mantle do not explain the radiogenic heat flux. In this regard, in the 1990s there was a hypothesis that at the initial stage of the formation of the Earth part of the radionuclides included in the kernel. This natural georeactor serves as a power source for mantle plumes and magnetic field of the planet. To test this hypothesis will help the JUNO detector.

What happened to the potassium-40

In the calculations of the heat flow of the planet usually do not consider the contribution from the decay of potassium-40. It is believed that it is much less than uranium-238 and thorium-232, and it’s all concentrated in the earth’s crust. However, these assumptions can be incorrect, believe scientists INR RAS and INEOS.

They use alternative, rejected by the scientific community, the model of primordial hydridic Earth, based on the fact that the composition of the planets is affected by their distance from the Sun. The fundamental difference of this model from the conventional in that it allows the content of radionuclides in the nucleus, and the mass of potassium-40 to two orders of magnitude higher than the mass of uranium and thorium. Due to this, the total heat flux obtained huge — about 304 vs 47 terawatts terawatts calculated for measurements in ultra-deep wells.

To resolve this paradox and to test the model of primordial hydridic Earth, according to the authors, can monitor geoneutrino. Moreover, it is critical to distinguish the signal from the decay of potassium-40. However, while current technologies do not allow to do so.