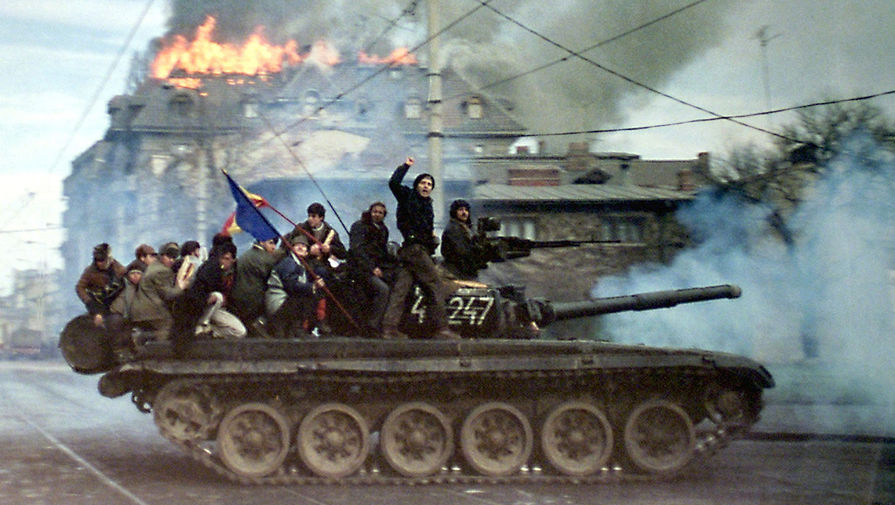 30 years ago in the Romanian city of Timisoara, the authorities tried to arrest a popular priest, that eventually turned into a revolution against the regime of Nicolae Ceausescu. Romanian and international historians still debate what role these events can play an external force.

When the house is popular in Timisoara, a Hungarian pastor Laszlo Calvinist Tekesh included representatives of the police, his house was already surrounded by a crowd of protesters. Boldly darting under the batons, the supporters of the popular priest surrounded his house live ring. The Romanian authorities the pastor has long been a thorn in the eye: he has acted with rigid statements to the Romanian authorities. The reason was the plans of the dictator Nicolae Ceausescu to create a large agricultural centers in the territories inhabited by ethnic Hungarians.

“It is the oppression of the Hungarian ethnic minority in Romania, under the Ceausescu regime became the spark that ignited the Romanian revolution in December 1989,” wrote historian Robert Kaplan’s book “Balkan ghosts: a Poignant journey through history”.

The unrest in Timisoara laid on the prepared soil — the economic situation in Romania was hard. By 1981, the external debt of the state amounted to $10.2 billion, Wanting rather to pay taken from IMF debt, Ceausescu called for a rigorous way to save electricity.

The Romanians had virtually ordered to turn off the lights in the houses. The prosperity of the Romanians — a product of the help of Western countries, who saw Ceausescu “opposition” in the Soviet camp, — a long time gone. By the time Ceausescu was in power in Romania for almost 30 years.

At its most recent meeting with Soviet General Secretary Mikhail Gorbachev, Ceausescu made clear that change is not going to accept. “We understand that need improvement, updating, but not about this I want to tell you now about something else. The form in which this is all done very seriously jeopardizes not only socialism, but also the very existence of the Communist parties of these countries. If allowed to continue this course, it may come to a very serious situation,” said Gorbachev, Ceausescu during the last meeting in Bucharest in December 1989.

While Moscow has also made clear that to intervene in the situation in Romania is not going to, and has in fact distanced itself from what is happening in this country.

The events in Timisoara, meanwhile, took a hard turn to: police and military began the suppression of unrest. As a result, killed dozens of people. Ceausescu himself, in spite of the event, flew with a planned visit to Iran, what was his biggest political mistake.

On 20 December he came back and appeared on national TV and called the incident in Timisoara trick “hooligan elements”, in front of the presidential Palace, stood a crowd of thousands. The rally, which was planned by supporters of Ceausescu, as a demonstration of loyalty to the Romanian people has become a manifestation of angry Romanians.

From the crowd shouted curses at the Romanian leader and his wife Elena. The revolutionary events unfolded rapidly, the police and the army was paralyzed, and part of senior military officials defected to the rebels.

The crowd were the leaders, among them disgraced the representative of the Romanian nomenklatura ion Iliescu, who would later become President of Romania. In an interview with “Газетой.Ru” he claimed that he became the leader of the protest only because of its popularity in opposition circles. “It was a popular uprising without any preparation on the part of political structures,” says Iliescu.

In turn, the us media later wrote that the then US President George Bush senior, allegedly addressed to Gorbachev with a request to invade Romania.

However, a historian of the cold war, Harvard Professor Michael Kramer denies this version. “This is the version that I love to tell in Romania. Gorbachev, of course, did not like Ceausescu, but the fact that the KGB and Gorbachev himself was behind the overthrow of Ceausescu, is all mythology. It’s true that some of those who made the revolution, informed the Union, but they did the deed themselves,” says Kramer “Газете.Ru”.

Romanian and international historians did not agree whether the events in Bucharest in December 1989, only spontaneous protest or was accompanied by a conspiracy against Ceausescu in military and party circles.

That army leaders have provided significant assistance to the revolutionaries, said the ex-President Iliescu, although at first, he said, the army carried out the order on the suppression of the uprising in Timisoara and Bucharest. The same thing happened with the Securitate (Department of state security of Romania). “The role of these structures during the regime was very active but during the uprising, they realized that the fate of the dictator, resolved and ceased to support the regime,” said Iliescu.

The researcher wrote that a group of senior Romanian leaders, including the previously deposed defense Minister Nicolae Militaru, later supported the revolution, during the perestroika appealed for help to the Soviet leaders. He Military, a graduate of Soviet military Academy, said that in 1987, during a visit to Turkey met with Soviet diplomats.

the Romanian army could be a conspiracy against Ceausescu, and refers to conversations with the military, which allegedly appealed to the Soviet leadership with the proposal to reset Ceausescu.

However, regardless of whether there was a “national salvation Front” to the revolutionary events, part of the Romanian elite in the party and the security services saw the perestroika in the USSR and changes in the neighbouring socialist countries the possibilities for your own changes. According to Romanian experts, Ceausescu and his wife Elena were standing in the way of reforms.

The only way to escape from the rebels to the ceauşescu couple was the flight on the helicopter that landed on the roof of the presidential Palace. The flight of the dictator does not immediately stop the confrontation in Bucharest, said the American historian Kramer: “Most of those who died, died after the flight of Ceausescu. The exact number nobody knows, because the present investigation was conducted”.