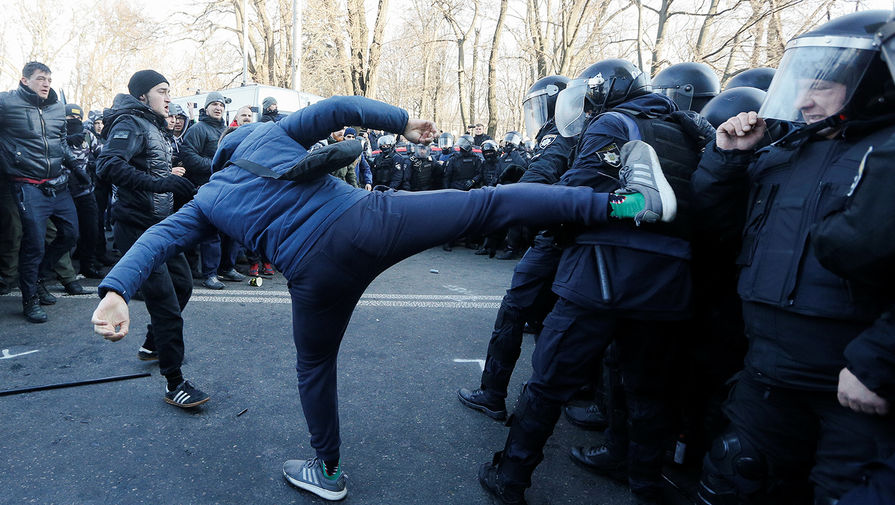 In the center of Kiev, clashes between protesters against the abolition of the moratorium on sale of land and the police, as a result of clashes injured several police officers and journalists. Mostly the riots take place in front of the Parliament of Ukraine, where protesters are trying to set up tents.

Mass protests take place in Kiev near the building of Verkhovna Rada, in particular, activists oppose land reform, which involves the removal of the moratorium on land sales in Ukraine.

Peaceful protests evolved into clashes with police, as a result, suffered at least two police officers had been hospitalized. The clashes began after law enforcement officers tried to prevent the activists set up a tent in the roadway in front of the Parliament.

“Law enforcement officers stopped citizens and have started with them preventive conversation… but the protesters began with the police a scuffle which developed into a fight. According to preliminary data, as a result of the conflict injuries were received by two police officers,” — said the press service of the Kiev police.

The clashes had detained one of participants of the fight, he is suspected of committing illegal actions, said the Agency, the activist taken to the police station.

In the course of the clashes, the Parliament, the unknown sprayed pepper gas, according to local media, because of the incident injured a policeman and several journalists. As the channel “112.Ukraine”, the protesters are trying to carry the tents to the Parliament building. The police are trying to thwart the actions of activists, indicates the channel, pepper gas went to the course after a verbal altercation between protesters and police.

However, in addition to law enforcement officers under the hot hand hit the demonstrators and journalists — two employees of “Public television” activists splattered with tear gas.

Protests in Kiev are connected with the fact that in November the Parliament adopted in first reading a bill to lift the moratorium on sale of agricultural land. The document allows for the sale of land to individuals and legal entities, territorial communities and the state.

Against this bill mostly farmers, trade unions and the opposition parties. In particular, “the Opposition platform For life” initiative is considered dangerous for Ukraine and in “Batkivshchyna” it is called anti-national.

According to the latest poll by the Kiev international Institute of sociology, 58% of Ukrainians are against the opening of the land market and the lifting of the moratorium. In support of the initiative of the authorities of Ukraine are only 22% of respondents.

It should be noted that the moratorium on selling agricultural land in Ukraine exists for 18 years. The Ukrainian authorities are not the first attempt to carry out land reform and remove the corresponding restrictions because of pressure from the International monetary Fund. The opening of the land market — one of the requirements for allocation of a new tranche of financial assistance to Kiev.

The main proponent of the lifting of the moratorium at the present time the President of Ukraine Volodymyr Zelensky, he, along with the government trying to convey to the people the necessity of change. The Ukrainian authorities claim that the amount of land available for purchase, will be significantly restricted for the individual. For example, one will be able to purchase more than 10-20 acres.

In addition, Kiev intends to prohibit the purchase of land to natural and legal persons from other States. In addition, for those who rent plots at present, will apply special conditions — non-interest bearing installment and redemption of the land without bidding.

Making changes to the current project is the parliamentary Committee on issues of agrarian and land policy, members must prepare a bill for consideration on second reading.

By the way, the main claims of the opposition to the bill related to the alleged “sale of Ukrainian” foreigners, as well as discussing the lifting of the moratorium without the popular vote. Zelensky also promised to put the question on possibility of sale of land to foreigners on a national referendum, thereby eliminating both of the controversial moment.