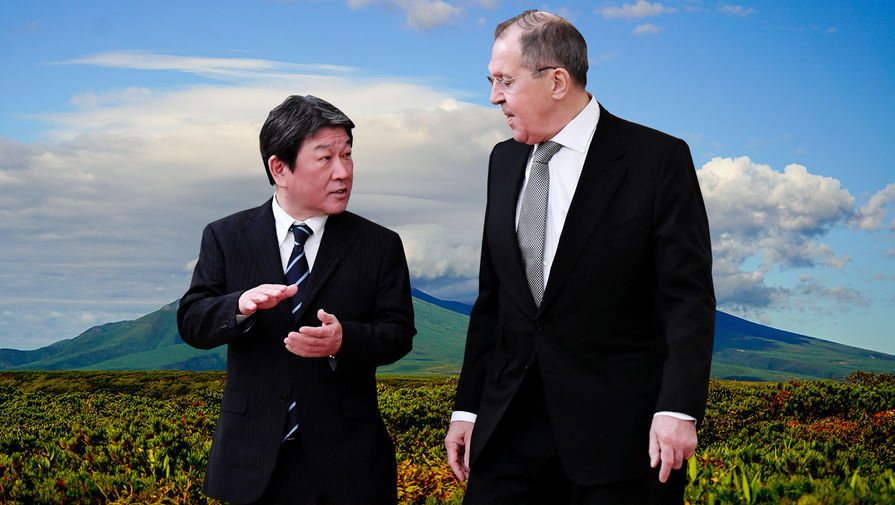 The Minister of foreign Affairs of Japan, Toshimitsu Motegi handed his Russian counterpart Sergei Lavrov, suggestions for concluding a peace Treaty. The problem is connected with the question of belonging of the Kuril Islands, which Tokyo considers his. Despite the controversies, the parties have agreed that the sailors of both countries will hold at the end of December joint exercises in the Gulf of Aden.

“We were able to conduct an in-depth exchange of views and dialogue on how to continue the discussion, to overcome the differences in the fundamental positions,” said Motegi following the meeting with the foreign Minister of the Russian Federation. According to the Japanese Minister, a large part of the meeting was devoted to the topic of the peace Treaty and to bridge differences on this issue.

“Finding a mutually acceptable solution, we need to continue the discussion, and clearly identifying those items that need to be discussed. I hope that this will lead to further progress in this direction,” said the Japanese Minister, whose words quoted by TASS.

Discussion of a peace Treaty between Russia and Japan — the main purpose of the visit Motegi in Moscow.

Motegi took office in mid-September, becoming the new responsible for the dialogue with Moscow on this issue. Unlike his predecessor, Taro Kono, he is not a career diplomat. Starting as a political journalist, Toshimitsu Motegi worked in business, and in 2012 was appointed economy Minister in the government of Prime Minister Shinzo Abe. He, in particular, oversaw the difficult trade negotiations Japan and the United States.

As noted in conversation with “Газетой.Ru” head of the Center for Japanese studies Institute of the Far East Valery Kistanov, inviting the foreign Ministry economist Motegi, Abe hopes that his “talent negotiator” will help to conduct a dialogue with Moscow.

He Motegi stated that it expects to change its approach to negotiations with Russia. According to the Minister, he plans to discuss a peace Treaty from a position of mutual benefit.

“A peace Treaty with Russia is a problem in which we have not advanced a single step for the last 70 years. I would like to expand my horizons and to approach the issue with a not one-sided positions,” said Motegi.

Since the purpose Motegi the head of the Japanese foreign Ministry, he has repeatedly met with Lavrov, in particular, the parties conducted negotiations in the framework of the summit of foreign Ministers of the G20 countries. However, while their conversation did not lead to the change of the situation around the peace Treaty.

The talks came to a “stagnant stage”

Moscow to Tokyo over half a century are unable to reach a compromise on the question of a peace Treaty. The basic contradictions related to the issue of belonging of the South Kuril Islands. Russia insists on a beyond a reasonable doubt of its sovereignty over these territories at the end of the Second world war, but Japan does not agree.

Tokyo considers its “Northern territories” four Islands — Kunashir, Shikotan, Iturup and Habomai. The Japanese authorities explain that the Simodsky treatise on borders and trade of 1855, which was signed between the Russian Empire and Japan.

On the eve of visit to Moscow Motegi noted that he hoped for “a Frank dialogue to resolve the territorial issue and signing a peace Treaty on the basis of a Joint Declaration of 1956”.

Russia has also stated that they are ready to do business on the basis of the 1956 Declaration, which stated that the Soviets can transfer to Japan two of four Islands in the Kuril chain. This condition must be the conclusion of a peace Treaty in which Japan agreed with the results of the Second world war.

The Japanese side was at that time ready to take this step, however, the United States put pressure on Tokyo. Washington then given to understand that if Japan would withdraw the claim in respect of the Islands of Kunashir and Iturup, the US will not return the island of Okinawa, where now is their military base. Today, Moscow is worried that the Americans can deploy the military and on the four Islands in the event of their transfer.

“When the 1956 Declaration was consistent, then the Soviet Union said that everything can be realized, to implement the Declaration in full, only in the context of curtailing the US military presence in Japan”, — said earlier the head of Ministry of foreign Affairs.

After talks with his Japanese counterpart Lavrov said that both sides “there is a clear indication of the Russian President and Prime Minister of Japan to expedite work on peace Treaty based on the 1956 Declaration, which, as you know, is an integral part of the international legal consolidation of the results of the Second world war.”

Despite the statements of Russian President Vladimir Putin and Prime Minister Shinzo Abe about the desire to move towards a peace Treaty, relations between the two parties on this issue, “went into a stagnant stage,” said Kistanov from the Center for Japanese studies. He also drew attention to the words of the head of the Russian Federation, who noted that the Declaration is not specified, what will be the sovereignty over the Islands.

The radicals want all the Kuril Islands

Shortly before the foreign Minister’s visit to Moscow the head of the Communist party of Japan Kazuo Seay urged to put forward the requirement on the transfer of Tokyo all the 56 Islands of the Kuril ridge.

The politician also called unfair the San Francisco conference of 1951 following the Second world war in which Tokyo has refused all rights to southern Sakhalin and the Kuril Islands — with the exception of the four Islands.

The Communist party of Japan — opposition force, which has a certain influence in the country — in Parliament, it has 12 deputies. This Kistanov from the Center for Japanese studies says that the position of Communists is not new. The left and the radical right have similar views on this question, he said, must “take into account the full range of views”.

Observers from the Russian and the Japanese side noted that in the near future it is hard to expect any solution of the territorial problem. According to Kostanova, the negotiations will go until the end of the term Abe.

However, despite the complexity of the negotiations on the territorial question, the Russian foreign Minister Lavrov said that “the talks were constructive and meaningful way.”

Hand, in particular, agreed to hold joint exercises in combating piracy in the Gulf of Aden near Yemen. The Bay is considered one of the most dangerous from the point of view of navigation. Exercises should be held in late December, said Lavrov.

For Japan such teachings — a chance to extend the possibility of using its self-defense forces, which are due in 2016, the amendments to the Constitution, can engage in logistics operations with “friendly” countries. This is the second exercise in time, the first passed in 2018.