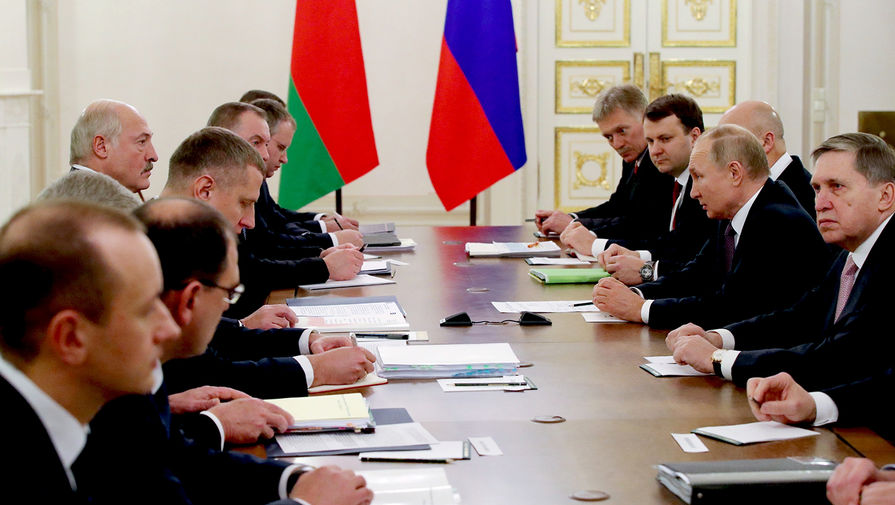 In St.-Petersburg passes session of the Eurasian Supreme economic Council, where the leaders of the EAEU countries outline plans for the future and discuss the achievements of the Union. Particularly at the summit waited for the head of Belarus Alexander Lukashenko. Today between him and Vladimir Putin was the next stage of negotiations about integration.

Today, December 20, in St. Petersburg held a meeting of Vladimir Putin and the leaders of the countries of the Eurasian economic Union (EEU) — the Union at the beginning of next year it will be five years. In addition to Putin at the meeting of the Supreme body of the EAEC, the Eurasian Supreme economic Council — attended by the leaders of Belarus, Armenia, Kyrgyzstan and Kazakhstan.

On the basis of reports the presidential press service, in accordance with the main agenda of St. Petersburg meeting, the Council members appreciate the current cooperation, will outline the line of deepening and sum up the interim results. In addition, the meeting will be appointed the new leadership of the Eurasian economic Commission, the regulatory body of the EAEU. The revamped Commission will begin its work next year. At the same time the chairmanship of the EEU will be in the hands of Belarus — the country which attracted perhaps the most attention at the summit.

The reason for that was expected almost two weeks Vladimir Putin meets with Alexander Lukashenko, where the leaders continued to talk about the deepening of Russian-Belarusian integration.

Active negotiations on the implementation of the principles of the Union state and the deepening of cooperation in the economic and customs areas are more than three months, and “the first swallow” in this case was the Russian-Belarusian working group, created a year ago.

Since then the country looking for option that would suit everyone, and from the meeting in Petersburg was expecting progress on this issue.

“On 8 December we celebrated the 20th anniversary of the signing of the Union Treaty. And despite the fact that much has been done in the framework of this agreement, the results of the work under this document is also significant”, — Vladimir Putin has not disregarded the flaws of cooperation, but the emphasis is still made on the progress made.

Putin also recalled growing up over the years, four times the trade turnover between the countries — it increased from $9 to almost $36 billion According to the Russian leader, the relations between Belarus and Russia and the continued political and social proximity of the States. Mentioning held in early December of the previous round of talks, the President called for further rapprochement.

Alexander Lukashenko and his Russian counterpart agreed, he said, countries “have to work”. He mentioned other joint achievements of the two States — in particular, a common defense space, lack of transport and diplomatic nuances.

A peculiar outcome of Friday’s talks failed, the Minister of economic development of Russia Maxim Oreshkin:

“The results of today’s talks there were three groups of issues that are blocking final agreement: this agreement in the oil industry, arrangements in the gas sector and agreements in the tax field”, — quotes the Minister TASS.

The last time Putin and Lukashenko discussed integration on 7 December in Sochi on the eve of the 20th anniversary since the formation of the Union state. Then I managed to resolve all issues, but almost immediately there appeared information about the meeting on 20 December to which the remaining inconsistencies had to be ironed.

An active dialogue between Moscow and Minsk concerning the theme of integration is from the beginning of autumn. All this time, the parties systematically coordinated “road map” governing the intricacies of the upcoming integration.

After the previous meeting of Putin and Lukashenko the paragraphs was about eight — they concern mainly the energy nuances.

The Belarusian authorities have repeatedly expressed the desire to reduce the price of purchases of Russian gas from the current $127 to $73. That Minsk continues to stand in these positions, recently said the Belarusian Ambassador to Moscow Vladimir Semashko.

Later touched on this subject Vladimir Putin — on Thursday, answering questions of journalists at the annual press conference, the Russian leader reminded that the price of $127 much lower than the price for Europe, which is about 200$. He also noted that the price of $73 for the Smolensk region is achieved at the expense of subsidies, whereas subsidies proportionate to the whole state, according to Putin, “strange question.” However, to completely reject this option did not become President.

Lukashenko said that the parties conceptually agreed to supply energy

however, the specific prices will be set later, reports “BelTA”.

At the press conference, Putin also confirmed and accepted, together with Lukashenko’s decision to stay the course on deepening of integration — the decision to create it, according to the President, was and remains correct. However, the issues to be resolved, too, still remain.