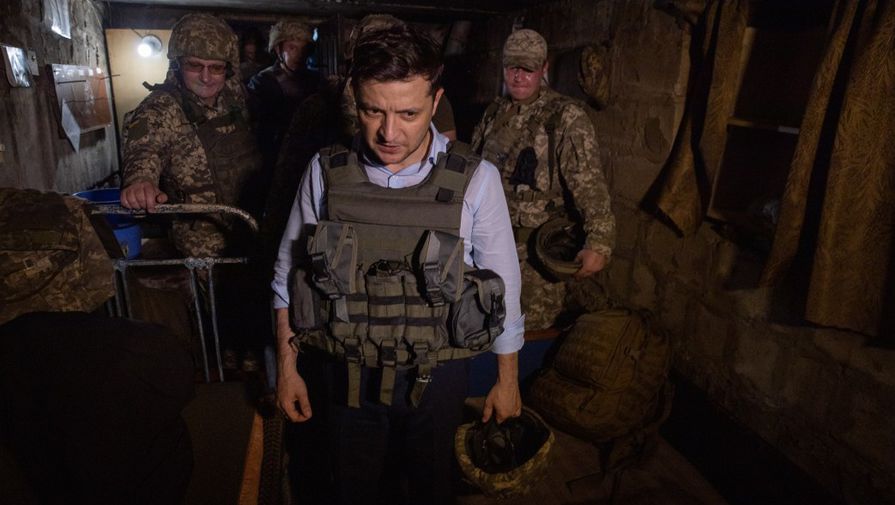 Today, December 24, Ukraine has planned to carry out large-scale exchange of prisoners between Kiev and the breakaway republics of Donbass — this date was called Vladimir Zelensky. However, the process will happen after the deadline, although before the New year. In case, if the exchange is for some reason fail, it will take advantage of Ukrainian nationalists, who accused Zelensky treason. To their support counts and the ex-President of Ukraine Petro Poroshenko.

Between Kiev and self-proclaimed DNR and LNR on Tuesday, was to take place the exchange of prisoners. That this day will be December 24 at the beginning of the month told the media the President of Ukraine Volodymyr Zelensky.

On the eve of Russia’s representative in the contact group on conflict settlement Boris Gryzlov said on the harmonization of conditions of release and exchange of detained persons. Process, according to him, will be held before the end of 2019.

The transfer of prisoners will take place according to the “all installed on all installed”, reported the delegate of the LC in the Minsk group Rodion Miroshnik.

The negotiators also agreed on a document outlining the obligations of the parties under this process, in particular, Kiev has promised immunity from prosecution of persons returned in the framework of the exchange.

“Cleanup” was exchanged for the unrecognized republics the main condition, as even giving arrested, Kiev could continue to prosecute.

In the case of exchange Kiev will give the DNI and the LC 88 people, and the Republic — 53. In December 2017 — during the last similar event — Kiev handed over 233 persons, the unrecognized Republic — 73.

In early September, Moscow and Kiev also held a first exchange of people who have been convicted or arrested on the territory of States. Homecoming was mutually by the formula “35 on 35”. In Russia as a result of exchange returned, including a journalist, “RIA Novosti — Ukraine” Kirill Vyshinsky and Ukraine — Oleg Sentsov, who was convicted in Russia for preparing terrorist attacks. Also went home 24 Ukrainian seafarers detained in the Kerch Strait for trespassing.

In the case that the exchange with the DNI and the LC is successful, it will be a “Supplement” to the President’s rating Zelensky, said in an interview with “Газетой.Ru” Ukrainian political analyst Vadim Karasev.

“For Zelensky main thing is not to win the presidency, but to win power, and these steps, he wins the power”, — said the expert. According to the analyst, in this case we are talking about “personal diplomacy” Zelensky, who tries to reach success, bypassing the bureaucracy of the foreign Ministry.

Karasev notes that this rate of work of the assistant Zelensky Andrey Ermak, which prepares many of the key agreements for the President.

Among the successes Karasev also called gas agreement with Moscow. It signed on December 20, the Protocol arrangements for the continuation of Russian gas transit through the territory of Ukraine. As stated by one of the Russian negotiators Deputy Prime Minister Dmitry Kozak, the term of the new contract will be five years.

In conversation with journalist Sergei Brilev Kozak praised the Ukrainian side for the constructive work on negotiating.

Despite criticism of the agreement in Ukraine, the prevailing economic interests. Verkhovna Rada Deputy Serhiy Liovochkin recently reminded colleagues that in 2014 Ukraine transitional 474 billion cubic meters of gas, earning $14 billion. According to him, Ukraine, as a country with a weak economy, cannot afford to lose this source of income, which brings in approximately $2.5 billion per year. He said that in the estimated size of the economy in the $154 billion of losses would amount to approximately 2% of GDP.

Signed the contract on gas and the agreement on the exchange of prisoners was reached at the summit “channel four”, which was held in December in Paris. Despite the breakthrough agreement was not the parties were satisfied with the meeting. On the sidelines of Putin and Zelensky held the first private meeting, which lasted more than an hour.

After Zelensky even answered a few questions of the Russian journalist, while his predecessor, Poroshenko has refused any communication with mass media of the Russian Federation.

The behavior of the current head of Ukraine is the rejection by nationalist circles and parts of the combat veterans who accuse him of treason. Their voices trying to enlist ex-President Poroshenko.

So, on Monday Poroshenko faction “European solidarity” promised that initiates sanctions against the Russian gas supplies. As said Poroshenko, his colleagues will require the convening of the national security Council on this issue, and “implementation of sanctions” against the gas supplies from Russia.

In conditions of internal pressure Zelensky will be harder to move in a realistic scenario, despite a majority in Parliament. If, before December 31 of the exchange for some reason does not take place, it will be the first major failure of the agreements for Donbass with Zelensky. His opponents, the nationalists, and supporters of Poroshenko, will take these factor.

However, for the Poroshenko 2020 promises many challenges: from 1 January enter into force the law on deprivation of deputies ‘ immunity and make it vulnerable to possible criminal prosecution.