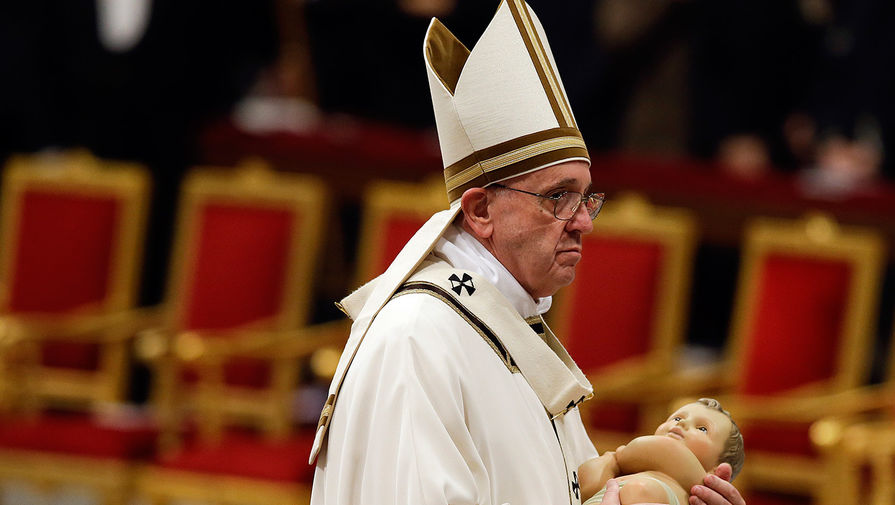 Pope Francis to celebrate Christmas asked the faithful all over the world, calling for peace in Syria and Ukraine. In the past year, the Pontiff took a great interest in the situation in both these countries, as well as performed with several peace initiatives. Despite the fact that in the Western press dad trying to show a certain “alternative” to Vladimir Putin, the Vatican is in dialogue with Russia, and many of the approaches of the two States to international problems actually coincide.

In his Christmas message, the head of the Catholic Church and the Vatican, Pope Francis addressed the traditional wishes to the Christians all over the world and called for peace in Syria and Ukraine.

“The light of the Savior — to his beloved Ukraine, which seeks concrete solutions to establish strong world”

The Pontiff also wished that “the light from the Nativity lighted children suffering from wars and conflicts in the middle East and in different countries of the world” and wished the world “beloved Syrian people”.

Francis, like many popes before him, takes an active part in ecclesiastical diplomacy as head of the Vatican state.

In the past year the situation in Ukraine and Syria was actively interested in the Pope, who discussed the situation in these countries with many political figures in the world. Shortly before the meeting in the Normandy format in Paris on 9 December, the Pope said that he even prayed for the success of the summit.

As for the situation in Syria, the Catholic Church takes a lot of effort to help those living in this country are Christians. It should be noted that this issue was raised and for the first time in many centuries the meeting of the Pope with the Patriarch of Moscow and All Russia Kirill in Cuba in March 2016.

The Pope and “Pope alternative”

Who ascended the ecclesiastical throne in March 2013, Francis is known for attention to the social agenda of migration, the situation of ethnic and religious minorities around the world. In October 2019, he opened on the main square of St. Peter in the Vatican a monument to migrants. The bronze sculpture represents the images of migrants of different cultures and historical periods.

Pope Francis also took the initiative to abolish life sentences for criminals. “It is impossible to deprive of the right to a new beginning,” said the Pope.

He also said in one of his speeches that the persecution in the modern world of Jews, Gypsies, and members of the LGBT community remind him of Adolf Hitler: “I Confess that when I hear performances of some of the people responsible for public order, or working in government, I recall the speeches of Hitler in 1934 and 1936 years,” he said.

Many of these claims distinguish the “people’s Pope” from their conservative predecessors. That’s why the reviewers of The New York Times previously noted that Francis is considered by many European liberals as the main moral authority, opposes the revival of populism.

The authors of the article even tried to oppose Pope Francis to Russian President Vladimir Putin, whom the NYT called “alternative Pope”.

Thus, the American journalists are trying to show, like the Russian leader, unlike the Pope, is supposedly on the conservative position.

However, despite the authors attempt to show the Pope and the Russian President’s antagonists, observers note that the dialogue between the Vatican and Moscow is quite active. As previously noted in conversation with “Газетой.Ru” Russia’s Ambassador to the Vatican Alexander Avdeev, the state is negatively perceived anti-Russian sanctions: the Vatican, and Pope Francis has sharply distanced himself from them — these sanctions have not received the moral support of the Catholic Church.

Sam Francis is in active dialogue with Vladimir Putin and in the summer spent most bilateral meeting. As stated by the Vatican on its results, “cordial” conversation, then, was the state of the Catholic Church in Russia, environmental problems and the political situation in Syria, Venezuela and Ukraine.

The assistant to the Russian leader Yury Ushakov told journalists that during the meeting of Francis and Putin, the two sides discussed such topics as “the struggle against terrorism, religious extremism, prevention of technogenic disasters.” However, he noted that many issues Russia and the Vatican “approach with close or nearly identical positions.”

One such topic is the situation in Venezuela, where the Catholic Church has great authority. Russia, like the Vatican, actively encourages the various parties to the political conflict to dialogue. It is known that meetings between supporters of President Nicolas Maduro and his opponent Juan Guido pass, including with the mediation of the Catholic Church.

Russia also welcomed the appeal of Pope Francis to world leaders urging them to preserve the disarmament treaties: “I Ask political leaders not to forget that these weapons are not capable of defending against threats or national security or international stability,” — said the Pontiff, speaking in the Japanese city of Nagasaki on the commemorative events dedicated to the nuclear bombing of 1945.

The words of Francis and the mediation of the Catholic Church continue the traditions of “Church diplomacy”, which the Vatican is engaged in many hundreds of years. An active conductor of Church diplomacy was Pope John Paul II, former Bishop of Krakow, Karol Wojtyla. In 1981, it took the Vatican a delegation of “Solidarity” led by Lech Walesa. The Church largely contributed to the dialogue between the Polish Communist authorities and the opposition, which led in 1989 to the agreement of the “Round table”.

The Catholic Church and its head, John Paul II also played a key role in preventing armed conflict between Argentina and Chile.

This happened in 1978, when the Argentine junta headed by General Jorge then Saw tried to take Chile a group of Islands located in the Beagle channel off the Eastern coast of Tierra del Fuego.

The operation was cancelled six hours before the start, after the newly elected Pope sent to Argentina as a representative of cardinal Antonio Zamora, later received the nickname of the Vatican’s Kissinger. Brokered Zamora between the two countries later signed a peace agreement.