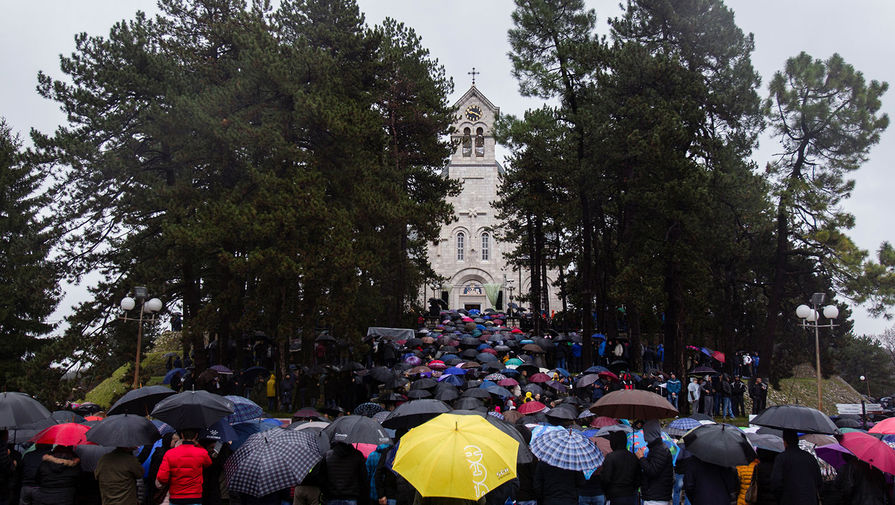 The Parliament of Montenegro adopted a controversial law on freedom of religion, despite mass protests of the population. The document was approved only MPs from the ruling coalition, because all of the opposition were detained by the police. The law infringes on the interests of the Serbian Orthodox Church in Montenegro and it involves the seizure of Church property.

The Parliament of Montenegro, by majority of votes adopted the law “On freedom of conscience and religion and the legal status of religious communities”, despite the wave of mass protests across the country.

The law seriously affects the interests of the Serbian Orthodox Church, providing for the confiscation of Church property of SPTS. We are talking about more than 650 relics, including the well-known in the Orthodox world, the monastery of Ostrog.

The initiative was supported by 45 of the 81 deputies of the Parliament, no one voted against, nor were there any abstentions. The fact that the day before law enforcement officers detained all of the deputies from the opposition, the document was supported only parliamentarians from the ruling Democratic party of socialists (DPS) and its allies. The controversial law was adopted by the deputies in 16 hours, in the course of discussion, they rejected all existing amendments — more than 115 comments.

The opposition demanded the revision of the document, but the ruling coalition led by the DPS refused to amend the bill. Then in the conference room began a massive brawl, after which detained all the opposition deputies. They were denied the right to participate in the work of the legislature to 15 days.

As stated in the opposition movement Democratic front (DF), the bill on religious freedom was passed in “an atmosphere of dictatorship.”

“After the abduction of the deputies of DF from the Assembly of Montenegro, the regime in an atmosphere of dictatorship to the applause of the approved law against the Serbian Orthodox Church (SPC)”, — stated in the message of the movement.

The ruling Democratic party of socialists, President of Montenegro, Milo Djukanovic on the ballot joined the social Democrats and the Liberal party, pointed out in DF, DPS also supported the movement Croatian, boshnakova and Albanian minorities.

The authorities of Montenegro believe that the Serbian Orthodox Church is trying to maintain a religious monopoly in the country. According to Djukanovic, Podgorica will seek for the autocephaly of the Montenegrin Church, as it did in Ukraine.

However, a controversial bill is not satisfied with not only the opposition but also the people of Montenegro. The protests began across the country on the eve of the detention of members of opposition parties during the discussion of the law on the freedom of religion. The mass demonstrations started with the city of Beran, where residents blocked the intersection at the entrance to the city, paralyzing traffic in four directions.

Their example was followed by the activists in most cities of Montenegro, including Bijelo Polje, Pljevlja, Podgorica, Bar, Kotor and Budva. The latter joined the demonstrators in the second largest city, Niksic.

The number of dissatisfied throughout the country for a short period of time grew from a few hundred to a thousand, despite the actions of police officers who are only in Podgorica detained more than 20 people. The opposition, along with the protesters demanded the authorities to withdraw a controversial bill to finalize or cancel it altogether.

However, the Prime Minister of Montenegro, Dusko Markovic did not go on about the unhappy, refusing to withdraw and modify the government’s initiative on freedom of religion. The authorities are not convinced and Metropolitan of Montenegro and the coastlands Amfilohije, who has collected about 20 thousand Faithful at the prayer Cathedral of the protection of the Serbian Orthodox Church.

In response to the tough stance of the authorities, the demonstrators in Niksic organized the March protests, and moved on foot toward the capital of Montenegro, on the way broke through the police cordon. In the procession was attended by several thousand people, which is comparable to the number of activists outside the Parliament building in Podgorica.

The Montenegrin government responded with mass detentions in different cities of the country and the arrest of all opposition MPs in Parliament for the first time in the modern history of the country. The exact number of detained protesters is still unknown, but the account goes on hundreds of people.