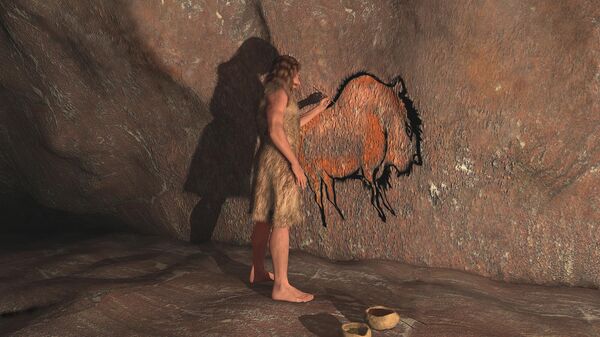 Tatiana Pichugina. Recent discoveries in Indonesia and Croatia refutes the established idea that the birthplace of rock art of the stone age — Western Europe. And primitive images on cave walls in Spain the age of 65 thousand years proves that the Neanderthals possessed symbolic thinking.

A hunting scene with the werewolves

On belonging to the Indonesian island of Sulawesi cave paintings discovered in the 1950s. Now there is documented drawings on the walls 242 of the caves and rock formations, new discoveries are made every year.

In December 2017, the scientists looked at the mountain cave in the karst limestone field Pangka in the South of the island and saw that a portion of the rear wall 4.5 meters long, covered with petroglyphs. This place is called the Liang See Sepong 4.

There are recognized two images are found only on Sulawesi pigs-babirussa, four dwarf Buffalo, as well as eight figures of half men and half half. They are called therianthrope — werewolves. Some hands, similar to the spears items, rope. At least one figure — a man with a tail, the other with a beak. Perhaps this is the “camouflage” of ancient hunters. Anyway, a scene of hunting of the stone age is depicted very clearly. 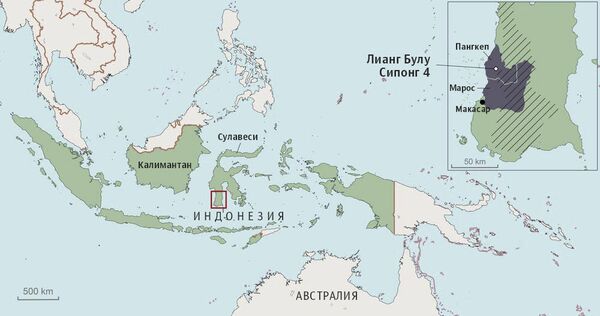 All images are made in red pigment in the same manner, suggesting the simultaneity of their creation. Like already found in other local caves.

Images of therianthropes indicate that some of the drawings refers not to the real world, according to the researchers, who described this finding. These prosperine images, although with certain reservations, is associated with shamanic beliefs, which are characterized by spirit-helpers from the Kingdom of animals.

Samples of lime nadejnosti blocked some parts of the painting, explored by radioactive uranium isotopes to establish the age. The result — from 43,9 to 35,1 thousand years. If you take the maximum, that is the oldest known rock creations created by anatomically modern humans. Perhaps before us the most ancient evidence of mythological thinking. Previously it was believed that the homeland of this phenomenon is Western Europe.

Prior to that on Sulawesi they found images of pigs 35 years ago. And the record belonged to the cave drawings of Kalimantan, adjacent to Sulawesi island, is 40 thousand years. 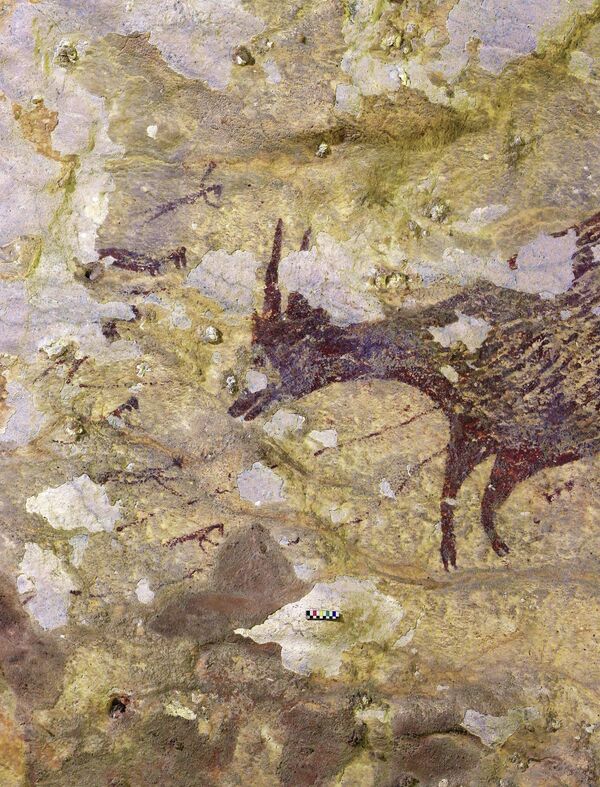 In the French Department of Dordogne identified 235 sites of ancient people of the era of the late stone age. In Croatia, Serbia and Montenegro square, 23 times larger, is only 50, and any rock paintings. For scientists it is a mystery: why is the Balkan Peninsula, lying on the likely paths of human migration from Africa to Europe remains a white spot.

In 2010, the Director of the Archaeological Museum of Istria (Croatia) Darko Komso found in the far part of the cave Romuald red drawings. In April 2019, he, along with colleagues from France, UK and Spain have published research results. It is the first record of rock art of the stone age in the Balkans.

All scientists have counted 44 figures on the four sections of the wall. All done in red pigment. Calcite, which caused the ancient artist, sometimes crumbled. Tourists also badly damaged artifacts, scribbled their graffiti. Because of this, the drawings are deciphered with difficulty.

Managed to disassemble that most represent points, lines and colored symbols. There are two animals: bison and the Alpine goat. Two figures like human, but poor preservation does not allow to say it is unique.

Excavations under the wall gave additional material. In the fossil stalagmite, on which stood a artist, found the wreckage ochre pencil, stone blade and embers.

Radiocarbon analysis of charcoal gave an age 17-12,7 thousand years. This contradicts the findings on the basis of stratigraphy (cultural layers) that petroglyphs made by the people who lived here in the late stone age — 34-31,5 thousand years ago.

The authors of the study tend to be more ancient petroglyphs. This is evidenced by the figure of a bison and performance style, typical for the era. Besides, 17 thousand years ago these animals, most likely, the Balkans have become extinct.

All this allows to reconsider prevailed in science of the XX century concediu, in accordance with which the rock art was invented by the people who lived in the stone age in Western Europe, mainly in France and Spain. In recent years the geography of the cave of fine art have expanded to Indonesia, Australia, South Africa, great Britain and Romania.

Ancient people began to Express themselves and the world through symbolic art many years ago. First there was personal jewelry: body coloring pigments, beads, feathers, talons. It was already used by the Neanderthals a subspecies of Homo sapiens is more ancient than the modern type of people. Later came rock art, but where, at what time, who invented it and whether it was Neanderthals, it is not yet clear.

A group of scientists from European countries determined the age of rock paintings in three caves in different parts of Spain La Pasiega, Maltravieso and Ardales. According to archeology, people have settled their 180 thousand years ago. On the walls are thousands of images made in red and black pigments and engraved drawings of animals, human figures, geometrical signs. It is created by people of different ages.

The researchers took 52 sample 23 plots of carbonate Nationala overlying and underlying images, and conducted the isotopic analysis for radionuclides uranium and thorium. It turned out that one of the red images in the form of a ladder in the cave of La Pasiega a minimum of 64,8 thousands of years, the palm print of Maltravieso — 66,7, the red pigment was in nadejnosti Ardales 65,5 thousand years ago. At that time, it was only the Neanderthals, modern humans appeared two dozen thousand years later.

All dated image rather primitive, made with red pigment: points, lines, disks, handprints. Scientists believe that it is postponed on walls copies of wearable jewelry. Handprints are not accidental, they required light and choice of location. The drawings clearly conscious. Similar images exist in other caves in Europe, perhaps they, too, Neanderthal.