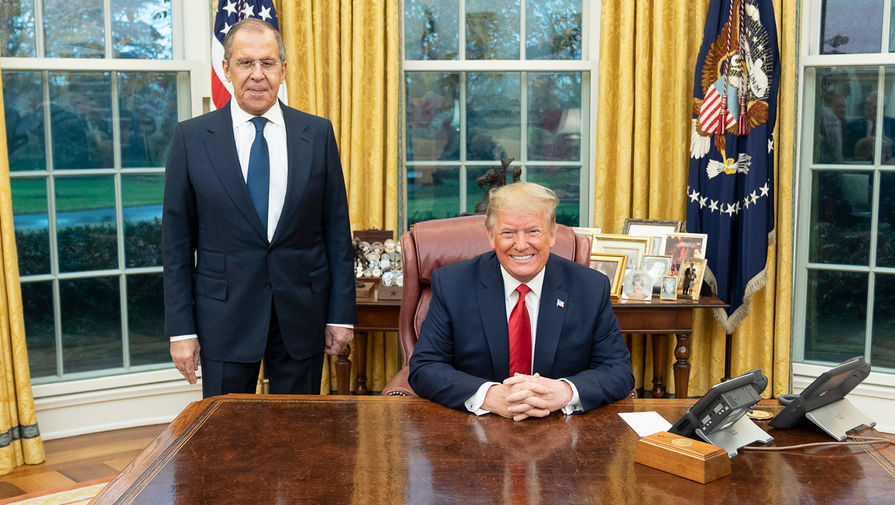 The last time the US abandoned the traditional forms of conduct in foreign policy and “put his feet up on the global table,” said the official representative of Russian foreign Ministry Maria Zakharova. Thus she commented on the Minister of foreign Affairs of Russia Sergey Lavrov and the President of the United States Donald trump during their meeting in Washington. It trump sitting at the table, but Lavrov stands nearby.

In recent years, the States changed the style of their behavior in world politics. This opinion was expressed by the official representative of the foreign Ministry Maria Zakharova in an interview with RIA “Novosti”.

Commenting on the photo, which was published by the White house on the visit to Washington of foreign Minister of Russia Sergey Lavrov, she urged “understanding of the current American reality”: and in the state Department, and the administration of the President, in her view, politics have lost “all superficial from the point of view of Protocol sensitivity”.

This is a picture in which the President of the United States Donald trump is sitting behind the Desk in the oval office, but Lavrov stands beside him.

Such a location of the participants of the meeting in the official photographs is atypical in ceremonial practice.

“I think a lot of things back to the days of “wild West”, which we have read so much in high school. Today we see how the traditional sphere, which was dominated by rules, traditions, formalities, in principle, the United States took on a completely secondary plan,” said foreign Ministry spokesman.

She said Washington “it’s a new, simplified”. In particular, this is manifested in the communion of trump with the media: tweets of the interview changed, the tradition of equal treatment of journalists was a thing of the past, noted the Agency interlocutor.

According to her, a similar situation is observed in the world economy. If before the United States pointed to the primacy of competition, they are now engaged in protectionism and political interference in economic life, impose sanctions, said Zakharov.

Existing U.S. attitude to the symbols and traditions she described with the phrase Take it or leave it: love it, don’t like goodbye, we are what we are.

“All instituted on the principle of convenience. Why I compare with cowboy times? That’s comfortable and functional, then, was to put his feet on the table. So today we live with the USA, which put his feet on the world’s table”, — decided by the official representative of the foreign Ministry.

The photo, which says Zakharova, was made during Lavrov’s visit to Washington on December 10.

His meeting with trump lasted about 45 minutes. In addition, the Russian Minister held talks with us Secretary of state Mike Pompeo.

After Lavrov said, trump is aware of the benefits of good relations between Russia and the United States. This was said in the White house. According to information of the presidential administration, during the meeting with Lavrov trump stressed the importance of improving relations with Russia in the interests of trade between the two countries.

The trump called a meeting with Lavrov as “very good”. “We discussed many topics, including trade, Iran, North Korea, the INF Treaty (on the elimination of intermediate-range and shorter-range. — “Газета.Ru”), control over nuclear weapons and interference in elections. Forward to continuing our dialogue in the near future!” — wrote the American leader on Twitter.

The last meeting positively appreciated in the Kremlin, said press Secretary of the President of Russia Dmitry Peskov. He called the important fact that the US President received Russian Minister.

“Another thing is that, of course, it is not necessary to speak about any positive, let’s say, the shifts in our bilateral relations, but such contacts are important”, — stated the representative of the Kremlin.

As for that photo of Lavrov and trump, it drew the attention of not only the subscribers of the American President, but experts. And Professor of diplomacy and consular service, Diplomatic Academy of the MFA of Russia, chief editor of “Diplomatic service” Vladimir Vinokurov expressed the opinion that

the trump and Lavrov did not violate diplomatic Protocol. He called the fact of the meeting of the parties more important than its form.

“In principle, I do not see any violations of the terms of diplomatic Protocol and etiquette. Still, trump is acting as owner of the Oval office and takes guest. Like at this moment to behave during the photo session, determines, of course, master all the rules of such events”, — said the expert RIA “Novosti”.