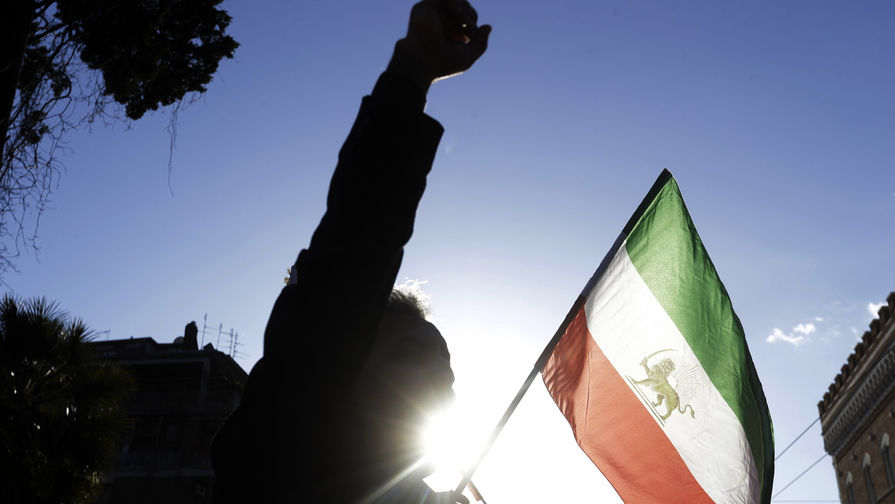 In Tehran and in other cities of Iran, the ongoing mass protests provoked by the crash of a Ukrainian plane. The protesters, mostly young people demand to punish the guilty and believe that the responsibility for the incident should take on the Supreme leader of Iran Ali Khamenei. Washington provides moral support for the protesters, trying to use their anger to disrupt the system. Soon in Iran must pass parliamentary elections, and their outcome is difficult to predict now.

The weekend in Iran sparked mass protests. The participants, mostly young people, first just carrying flowers and candles in memory of the victims, but soon the commemoration turned into an anti-government rally.

How to write the world’s media, the police to disperse the demonstrators was not only used tear gas and firearms.

In the protests involved tens of thousands of people — not only in Tehran but in other cities — Shiraz, Isfahan and Hamadan.

Protesters shout political slogans against Supreme leader Ayatollah Khamenei, calling on him to resign: “Khamenei, have some shame. Leave the country”, — quotes the protesters broadcaster CNN.

In a similar slogan by American journalists saw a hint of the Shah of Iran Mohammad Reza Pahlavi, who fled the country after the Islamic revolution of 1979. The social media accounts of protesters, you can see portraits of the spiritual leader of the country with the criticism.

Iranian authorities have acknowledged that the released unit of the Islamic revolutionary guard Corps, the missile hit the plane of the Ukrainian airline Ukraine. Killed 176 people: a canadian citizen of Iranian origin, as well as Ukrainians and representatives of other countries.

Under pressure from the international community, the Iranian authorities acknowledged this fact publicly, however, their silence and attempts at first to hide the truth angered the Iranian youth.

Many of them tore down posters depicting Iranian commander Qassem Soleimani from the walls of buildings. Iranian General killed US in Iraq in early January, recently was a symbol of the unity of the Iranian nation.

“The main reason the current protests is that the Iranian people are deeply disappointed and angry with how the government solved the problem of crash of a Ukrainian plane. Many have criticized the government for what it did not say the truth from the beginning. The protests this time were not as widely distributed, so I don’t see any immediate threat to the government in this regard in the short term,” says “Газете.Ru” expert club “Valdai”, senior lecturer of the University of Shaheed Beheshti in Tehran Hamidreza Azizi.

Trump is watching the protests

Protesters Express their anger against the leadership of the IRGC. A lot of love in Iranian society, these groups had not been used. In 2018, according to the order of Khamenei, part of the property Housing it was decided to privatize. Khamenei said at the time that the guards who control a third of Iran’s economy must do its primary function — promotion of the “Islamic revolution” and the business they own, called “inappropriate.”

The Iranian Parliament has already expressed its solidarity with the IRGC. “Error led to heavy losses, however this should not be the basis for the self-abasement of the IRGC, which has always defended our country,” — reads the statement of the deputies.

“Brave and long-suffering people of Iran: I support you from the beginning of my presidential term, and my administration will continue to support you. We are inspired by your courage,” said trump.

The White house also appealed to the Iranian authorities demanding to allow for monitoring the protests of human rights defenders. According to him, Iran does not have to “deal with peaceful protesters,” and off across the country access to the Internet. “The world is watching,” added trump.

In the White house do not hide hopes that the loosening of the Iranian system will lead if not for regime change, then the change in the political course of the country. Certain expectations of internal change in Iran, the White house connects with the possibility of the resignation of Iranian Supreme leader Khamenei. He is 80 years old and he is suffering from cancer.

In power, he is since 1989, however, his position is not a life. To appoint and dismiss the head of the state Council of experts, which consists of influential members of the clergy. The Council is elected for eight years and the next election will be soon in 2024.

Calling on the people of Iran to unite in the face of potential threats from the United States, the Pro-government group trying to bring down the mood of the crowd alternative meetings. One of them held near the British Embassy of the people’s militia “Basij”. The protesters demanded to close its Embassy due to the fact that the Ambassador of this country in Iran Robert Makar allegedly participated in demonstrations.

According to the Ambassador, he went not to protest, and that was billed as a vigil in memory of the victims of the crash of the Ukrainian aircraft Boeing. “I can confirm that I did not participate in the demonstrations,” the Ambassador said.

In his opinion, visiting such memorable events is a normal reaction, because people want to pay respect to the victims of the crash. “I left [the scene] five minutes later when someone began to chant,” added Machar. The diplomat was detained by police but released after it was found on his person.

The situation in Iran may deteriorate ahead of the elections to the national Parliament — the Majlis, which will be held in February of this year.

Despite the fact that to participate in the voting, the candidates go through the selection of the Supervisory Board, even among approved can be reformist-minded candidates.

According to Iranian expert Hamidreza Azizi, the fact of the protests said that differences between the government and society intensified: “These protests are a sign that between many people and the government occurs the deepening distrust. This will have serious consequences in the long term from the point of view of the government’s ability to mobilize people. Given the instability of the situation and the pace of events is difficult to predict the consequences for the upcoming elections, but the trend which began to take shape, will have long-term consequences.”

In turn, senior analyst at the expert Institute of the Gulf State Analytics in Washington Theodore Karasik believes that the protests caused by the situation around the aircraft, “became the spark that ignites the Iranian protests”, giving them a “destabilizing” for the government factor: “In the last series of riots, it was important to observe how the burning symbols of the Islamic revolution.

These protests will be much harder to suppress, and with the upcoming parliamentary elections, likely to be more problems. It seems that the court is the entire Iranian regime,” — said the expert “Газете.Ru”.

On the election situation imposed a difficult situation weakened sanctions on the Iranian economy. At the end of the year, Iran has experienced a wave of protests in connection with the increase in gasoline prices. It was small, but hit the pocket of many Iranians with low incomes.

"How much will yield?" Analysts described the discount in Russia for the machine

LTC is stuck at $50 if the coin rise with bitcoin?