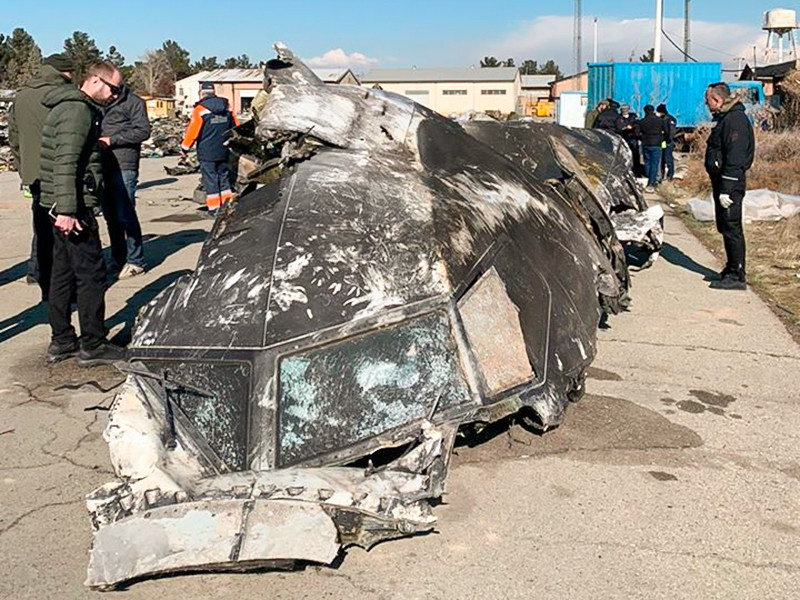 General Prosecutor’s office reclassified the criminal case about the crash Boeing in Iran and now considers it not a violation of the rules of operation of air transport, entailed death of people, and premeditated murder of two and more persons and destruction of the aircraft. As reported on the website of the Ministry, the decision about the reclassification was made based on the results of data processing for the plane crash, and given the fact that Iran has pleaded guilty in a missile strike on the airliner.

The office of the President of Ukraine Vladimir Zelensky published in Facebook photos of the wreckage. Photos, videos, and other materials handed over to the Ukrainian experts involved in the investigation of the crash. In the office Zelensky expressed the opinion that, thanks to the collected data the investigation should take place objectively and in a short time.

After consultations with Ukrainian specialists and a telephone conversation with President of Iran Hassan Rouhani, which has already taken place, Zelensky intends to speak to the people of Ukraine.

Secretary of the national security Council (NSDC) of Ukraine Oleksiy Danilov in interview to the Ukrainian service of the BBC said that the Ukrainian side had evidence the missile attack on the plane even before the statements of the international partners of the country and recognition of Iran itself.

In particular, according to Danilova in Kyiv received information from the Ukrainian experts from Tehran. “Experts have found evidence that it was a missile. With high probability we know the name of this rocket, we know when it was bought by the Iranian authorities know who bought it,” said Secretary of the NSDC. Among versions of causes of the crash, the national security Council called the hit Russian missiles “tor”.

According to Danilova, the presence of these evidence as well as public statements that it could be a missile, affect the position of Iran. We will remind, till today, the Islamic Republic has denied that a Ukrainian plane was shot down by a missile and insisted on the version of technical malfunction, in particular of a possible fire engine.

Danilov added that the photo that was released by the office of the President of Ukraine, clearly shows that the missile hit the cockpit. “We believe it is a proven fact, and therefore the negotiations which were to lead our pilots – they stopped immediately. They, unfortunately, died immediately after the first blow,” said Secretary of the NSDC. These photos are visible holes from the release of submunitions.

Danilov said that 30% of the bodies have been identified. Roughly 20-21 January they will return to Ukraine. He added that the investigation into the crash continues, Ukraine will insist on bringing to justice the perpetrators of the destruction of the aircraft with passengers. Daniel also expressed confidence that Iran will pay compensation to the families of the victims and the cost of the aircraft.

Meanwhile, the journalist of The New York Times Christian Tribert on Saturday posted on Twitter a video from surveillance cameras, which allegedly captured the launch. It is noted that the date and location coincide, but time is not. Trabert said that it may be associated with the downed settings.

NEW: This CCTV footage appears to show an Iranian air defense system, northeast of Parand, firing a missile. I've geolocated it right under the approx. location where we think the missile hit the jet. Date is correct (18 Dey 1398) but time is off (7:48), maybe due to settings. pic.twitter.com/cuoadeEG1y

January 11, three days after the collapse of Boeing, Iran admitted that the airliner was mistaken for an enemy object and mistakenly shot down by air defense system of the country, but did not hesitate to lay some of the blame on the United States, whose military aircraft have stepped up flights after attack by Iran, U.S. bases in Iraq. The Islamic revolutionary guard corps (IRGC) has assumed responsibility for the downed Boeing, adding that the operator of the system of defense acted on its own due to the lack of communication with command, and he had 10 seconds to decide.

Iran’s President has promised to continue the investigation and bring those responsible to justice. Ukraine has demanded from Iran to fully admit guilt to apologize at the diplomatic level, to pay compensation to the families of the victims to return the bodies of the victims home. In downed “Boeing” were 176 people – 167 passengers from Iran, Ukraine, Canada, Germany, Sweden and Afghanistan and nine crew members.

Dog bowl cat on a sled, won the Internet

Battle of the billionaires: the Democrats have found their trump

JIT was accused of “nedorazvedany” the catastrophe of MH17: a revived version of the Ukrainian fighters, and “Letter” allegedly did not exist