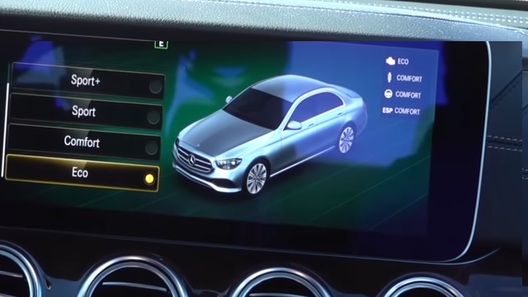 The official date of the debut of a restyled version of one of the most popular Mercedes has not yet named. But thanks to an accidental leak during the shooting of the review of no secrets is almost gone: it is unlikely that Mercedes-Benz was counting on it.

On the YouTube channel MercBenzKing appeared overview of future trends: practice of giving journalists and bloggers the opportunity to meet has not yet been declassified by now fairly widespread. In this case, “cinematic”, as a rule, agree not to disclose key information ahead of time.

But in this case, something definitely went wrong. The authors of the movie, exploring the depths of the multimedia complex MBUX, which will acquire E-class, came across, apparently, one of the menu items, which is illustrated by a picture of the car. And was so distracted, that the frame is included in the final version of the survey. Accordingly, it is now known that the exterior of the restyled sedan will be affected very slightly.

Judging by the picture, the main changes will be processed head optics and new front bumper. The rear view has not been demonstrated, but, rather, in the stern of sedan refinement would also be cosmetic.

According to a recent statement of the manufacturer, the main efforts of engineers in the process of planned the restyling was focused on the modernization of the electronic component: the family should obtain a set of new assistance and multimedia technologies. In addition, “Jeschke” has promised at least one new motor and seven hybrid models.

Sales of the updated Mercedes-Benz E-class is supposed to start in Europe this spring, and that means that the official debut of the novelty is not far off.